Doctors say too much weight can injure students

Even in the days of flash drives and digital books, a student not wearing a backpack as he or she heads to and from school has become a rare sight.

But when overloaded and worn incorrectly, backpacks can cause serious problems, especially for younger students. The American Academy of Orthopedic Surgeons, which has issued a warning to parents about heavy packs, notes that they can injure muscles and joints and lead to severe back, neck and shoulder pain or numbness or tingling in the arms or legs, as well as posture problems because students must walk leaning forward. 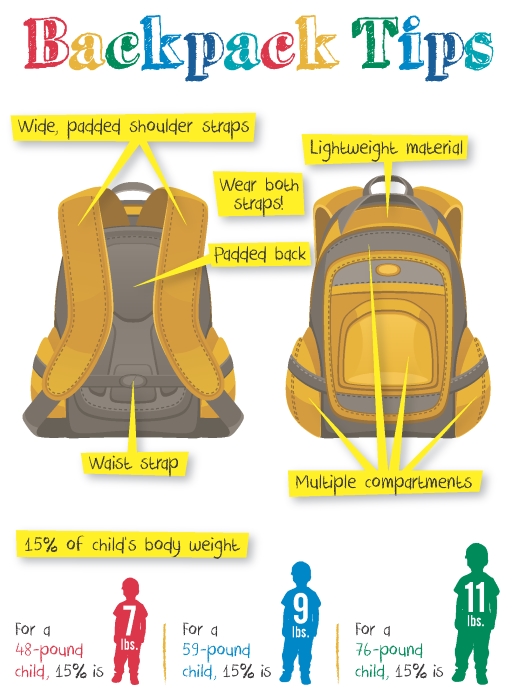 The issue is serious enough that some states, including California but not New York, require school districts to lighten the load. Although guidelines vary, the consensus among doctors seems to be that a loaded backpack should weigh no more than 15 percent of a student’s body weight. The American Occupational Therapy Association holds an annual National Backpack Awareness Day (this year it’s Wednesday, Sept. 26) in which the group’s members visit schools to weigh students and their packs.

At Haldane, school officials say they are aware of the burden. “We don’t send text books home at the elementary level,” said David Wallick, the principal at Haldane Elementary, adding that most parents seem to be careful about overloading their children.

At the high school, Principal Julia Sniffen said students are encouraged to visit their lockers at least three times each day and carry as little as possible in their packs. Haldane has also increased its use of dual textbooks, she says, with one book for classroom use and a duplicate to keep at home. “Our increased use of digital textbooks is also lightening the load,” she said.

Sniffen said she is aware of the challenge of keeping packs from becoming too heavy. “I have two middle school children,” she said, “and it’s a constant struggle to get them to check their packs and carry only what is needed.”

Parents may believe they are doing their children a favor by purchasing roomy backpacks, but, as with a house, stuff seems to expand to fill whatever space it has. Rolling packs lighten the load but receive mixed reviews. They tend to clutter school corridors and can become a tripping hazard. Shoulder bags, which place the entire weight of the pack on one side of the body, are also not endorsed.

The most common advice includes:

One thought on “What’s in That Backpack?”