Plans are underway to close the Silver Spoon Cafe on Main Street in Cold Spring and convert the space to seven hotel rooms.

The Cold Spring Planning Board was expected at its Thursday (Sept. 27) meeting to begin review of a plan by Hussein “Jimmy” Abdelhady, who owns the restaurant and building at 124 Main St., to convert the space. If approved, it would expand the bed and breakfast he operates on the second floor from five to 12 rooms. 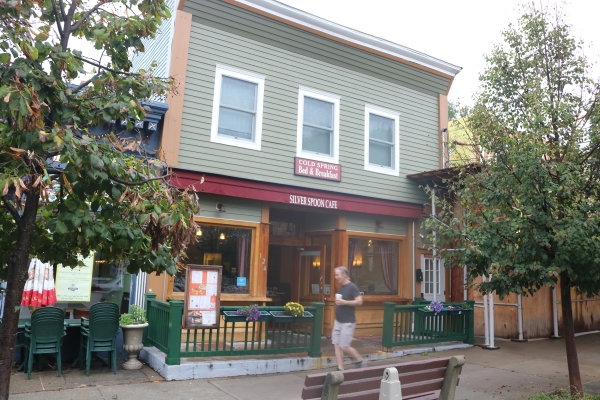 Abdelhady, who opened Cold Spring Bed & Breakfast earlier this year, told The Current he would keep a small kitchen on the premises to prepare breakfasts.

“I get calls for rooms every day,” he said. While many calls are from the New York City area, he said some have been from visitors coming from England, Germany and Turkey.

The project is in line with recommendations in the village’s 2012 comprehensive plan to increase overnight accommodations in the village. Matt Francisco, chair of the Planning Board, said at the Sept. 25 meeting of the Cold Spring Village Board that his board had received the application from Abdelhardy the day before.

Trustees agreed to seek $20,444 in docking fees from Seastreak, which plans to again bring cruise ships to Cold Spring on weekends beginning Oct. 6 aboard a $25 million, 700-passenger ship.

The village needs volunteers to serve on the Recreation Commission and Zoning Board of Appeals.

At the Village Board meeting on Sept. 11, Merandy said he would contact the New York City Department of Environmental Protection to urge the agency to finish up an agreement that will allow the village to tap into the Catskill Aqueduct during repairs to the village reservoirs. Negotiations with New York City began seven years ago and Greg Phillips, the superintendent of water and wastewater, has repeatedly expressed frustration with the lack of progress.

The Cold Spring Police Department responded to 91 calls in August and issued 116 parking and traffic tickets. One arrest was made under the state’s Mental Hygiene Law, which allows officers to detain anyone who appears to suffer from mental illness and may harm himself or herself or others. Officer-in-Charge Larry Burke also reported that he and Merandy met with Haldane officials to discuss safety related to traffic and student drop-offs.

Ruthanne Cullinan Barr, chair of the Recreation Commission, reported that soil testing will be done for a skate park proposed for Mayor’s Park.

The board approved the completion of probationary periods for Highway Department Crew Chief Robert Downey Jr. and laborers Zach Markey and Corey Thomas, along with a wage increase to $16 an hour.

Trustee Marie Early reported that the cost of disposal of recyclables continues to rise and is now just $13 per ton less than trash disposal.

Extensive repairs to the Cold Spring firehouse roof are complete, and the siren was also repaired.