Go-Go Pops, the Cold Spring mainstay known for its handmade (and handheld) fruit pops, will close its Main Street location at the end of January.

“We love Cold Spring and wanted to keep the business here but couldn’t make it happen,” said Lynn Miller, who owns the shop at 64 Main St. with her husband, Greg, which they run with help from their son, Jack. 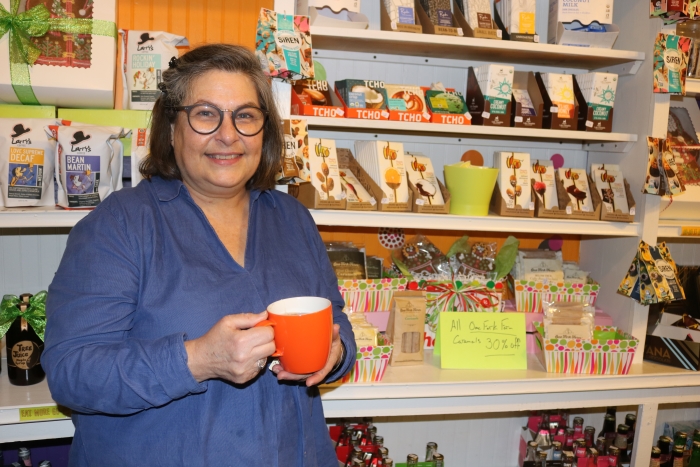 Lynn Miller at Go-Go Pops, which will close at the end of the month (Photo by M. Turton)

The family will shift its focus to Veggie Go-Go, a larger restaurant on Route 9 in Wappingers Falls that opened a year ago and offers vegetarian and vegan foods as well as Go-Go Pops’ menu.

“We’re hoping someone might take over Go-Go Pops and put their own stamp on it,” said Miller, who is a village trustee. “The store is very well equipped.” She noted that, especially for a shop selling frozen treats, the winter months are always a challenge.

Miller recalled the day the shop opened in 2010 when “a very pregnant woman and her husband came in,” she said. “She was already in a long labor and they were walking up and down Main Street trying to move things along.” The woman gave birth to a boy later that day.

The new owners of 92 Main St., which until Nov. 30 housed the Cupoccino Cafe, filed articles of organization with the state for a limited liability corporation called Bohemian Cafe. Craig Roffman of Philipstown, identified as its agent, did not reply to a request for comment on plans for the space. The building was purchased in 2017 for $480,000 by another LLC, Rivertown Holdings.

Another high point, Miller said, has been the steady stream of young people who have been both customers and employees of the shop. One of the goals of the business, she said, was to provide training and job opportunities. “I’ve been surprised at how many amazingly talented kids live in this town.”

Miller said she will miss Go-Go Pop’s location in the heart of the village. “Every day looks different on Main Street,” she said. “It’s like being in a Norman Rockwell painting.”

One thought on “Go-Go Pops to Close”