Nicholas DePerno Jr., Putnam County’s director of constituent services, who doubles as the county executive’s bodyguard and driver, violated state law by interfering with a workers’ union and “physically accosting” its local president at a 2015 rally, a state administrative law judge ruled earlier this year.

The judge, Melanie Wlasuk, faulted the county, as well as DePerno, “the county’s agent,” for bullying Jane Meunier, who works in the county Health Department and is the longtime president of Local 840 of the Civil Service Employees Association (CSEA), which represents many Putnam County employees.

DePerno is a retired Putnam County Sheriff’s Office investigator who was hired by Odell in 2011 to answer emails and phone calls from constituents and work as her bodyguard and driver.

The case stems from an incident that took place in 2015; it is not unusual, the union says, for complaints to take years to make their way through the state labor review system. On Oct. 26 of that year, about 60 union members staged a rally outside county offices in Carmel to protest a plan by County Executive MaryEllen Odell to charge retirees more for health care.

According to union testimony, DePerno “inserted himself into the middle of CSEA’s gathering, grabbed Meunier-Gorman [her name at the time] by her jacket, shook her and yelled at her.”

After hearing testimony from union officials and DePerno, the judge ruled on Jan. 28 that she found “DePerno’s actions in physically accosting Meunier-Gorman and yelling at her” both “inappropriate” and “outside the boundaries of normal professional interaction.” She concluded that he “acted for the specific purpose of interfering with CSEA’s rally and intimidating Meunier-Gorman.”

Meunier declined to comment on the judge’s ruling but told a CSEA publication in February that, after the 2015 incident, “when it started to sink in, I was extremely traumatized. We can’t be afraid to speak up against injustices like these.” 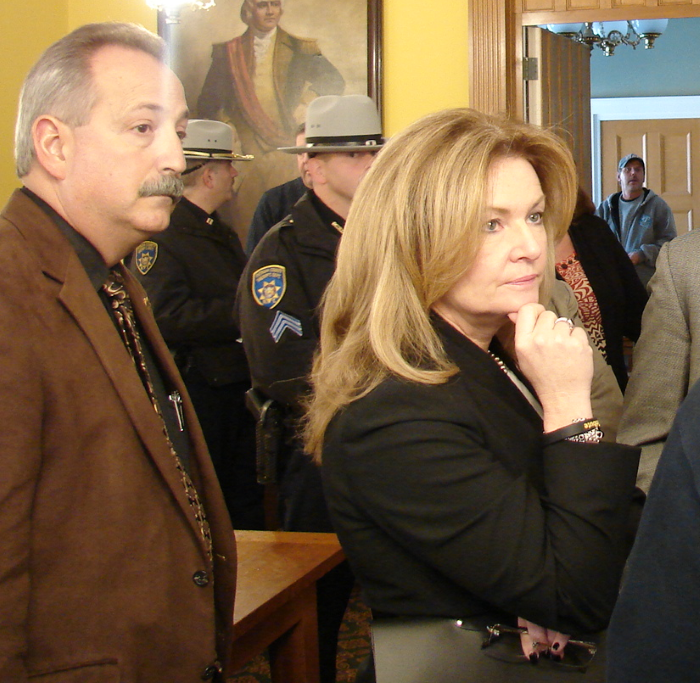 On Thursday (March 14), Odell said that “importantly,” the judge had dismissed two of three allegations CSEA brought — that DePerno violated a law banning interference with administration of an employee organization, and that he violated another that prohibits retaliation against employees because of union activity.

The county executive also said that while county officials “believe there to be legal grounds” to contest the decision, “the county will not be doing so, as it is imperative that both the county and the union move forward together in a positive and meaningful way.”

She listed ways the county and union cooperate, adding that despite all that, “and the fact that I firmly believe that the county did not ever intentionally engage in any behavior with the purpose of interfering in union activities, I fully support the continued training of county personnel so that they may continually better themselves as managers, and I firmly believe that such continued training is a more than adequate solution to this matter.”

She noted that she had talked with Meunier and CSEA officials and that the day after their discussions the county and CSEA resumed long-stalled negotiations for a contract between the union and county that expired on Dec. 31, 2015.

In a separate statement, Jennifer Bumgarner, county attorney, pointed out that DePerno had belonged to unions throughout much of his career and that his son is in CSEA’s Putnam unit. DePerno “has enormous respect for the work and efforts of the employees” in the union, Bumgarner said. “Although he understands the decision” by the judge, “he is disappointed that she did not recognize the purely innocent motivations behind his actions. At no time did he intend to interfere with any union activities or with their right to assemble. In fact, DePerno and  Meunier had enjoyed a friendly and congenial relationship prior to the incident complained of, and he regrets any misunderstanding between them.”

A county employee for more than 30 years, Meunier in 2014 won a CSEA occupational safety and health award, drawing praise from the union and Odell, who cited “her tireless efforts to ensure the health and safety of her fellow employees.” Meunier also serves on the Dover Town Board in Dutchess County and is a volunteer firefighter.

Jessica Ladlee, a regional CSEA representative, said on Monday (March 11) that Putnam County does not have a record of union harassment or inappropriate behavior by county officials. “This was definitely an isolated, shocking incident,” she said.

Both Meunier and Thomas Wargas, a county employee and union shop steward, testified that after DePerno grabbed and shook her, Wargas stepped between them, seized DePerno’s hands, and steered him away. DePerno then began poking and tickling Wargas as if to deter him or turn the incident into a joke, they said.

In his testimony, DePerno offered a far different account. He said he told Meunier, “Jane, baby, sweetheart, could do you do me a favor? Can you not make a mess of this place?” because some participants were snacking on pizza, to which she replied: “Of course, Nick. Who do you think you’re talking to?” He said Wargas then interceded, saying: “Hey, that’s no way to talk to a lady.” Everyone was “kidding around,” DePerno said.

However, he acknowledged tickling and poking Wargas and said that while he knew Meunier belonged to the union he was unaware she was president.

Meunier and Wargas challenged DePerno’s recollections of what was said and his portrayal of the encounter as light-hearted.

After the incident, Meunier filed a police report as well as a workplace violence report. (The year before, Putnam had become the first county in the state to implement a comprehensive workplace violence prevention program.) Meunier said in the police report that while DePerno’s “offensive or rude” joking comments in the past had made her uncomfortable, the incident at the rally “crossed the line.” She said that DePerno’s behavior throughout the episode was often explained as “just Nick being Nick.”

In her workplace violence complaint to the county, Meunier said that as the rally ended and participants walked indoors to a county budget meeting, DePerno tried to “bump [her] with his butt,” but she pushed him aside. She characterized his behavior throughout the incident as “very hostile” and said it left her “shocked, intimidated, humiliated and extremely shaken.”

DePerno testified that he learned of the police report when a state trooper warned him to “stay away from” Meunier but told him no charges had been filed.

In November 2015, the CSEA complained to the state’s Public Employment Relations Board that DePerno had violated three provisions of labor law. In response, Putnam County contended that DePerno had “acted at all times within its legitimate managerial prerogatives.”

Asked if he had spoken to Odell by phone before approaching Meunier, DePerno confirmed that he had but could not remember what they said. He “mostly likely” advised her about the union protest, he said, explaining that Odell told him to “go home.”

The judge declared that DePerno “clearly” had been keeping Odell apprised of developments and, therefore, “a reasonable basis exists to hold the county responsible” for his conduct. “The fact [it] may not have been specifically authorized by the county does not undermine this,” she wrote.

In her ruling, the judge said she did not find DePerno credible as a witness. “Interestingly, his recollection was solid on points that benefited him, while he couldn’t remember other more questionable interactions,” she wrote, noting that while DePerno was “110 percent” certain of what he said to Meunier, he couldn’t recall details of his telephone conversation with Odell right before the rally.

The judge ruled that DePerno violated state law when he “acted deliberately for the purpose of interfering with the CSEA members’ right” to stage a rally. She described his conduct as “so egregious it would have a chilling effect on employees exercising the fundamental rights afforded them” by law to engage in union activities.

Moreover, she added, “DePerno’s status as a high-level managerial employee, with close ties to County Executive Odell, only heightens the chilling effects of his behavior.” The judge ordered the county to “not interfere with, restrain or coerce” Meunier or other CSEA members “in the exercise of their rights.” She also directed the county to post in county offices for 30 days a notice to that effect, although it does not mention DePerno by name.