Sheriff calls decision ‘too big for our politicians’

As members of the Putnam County Legislature on Monday (March 18) urged the state to slow the push for legal marijuana, Sheriff Robert Langley termed the issue “too big for Albany.”

Speaking before the Legislature’s Health Committee in a room in which the audience spilled into the hallway, Langley called for a statewide referendum on the legalization of recreational marijuana.

“Let the people be heard,” Langley said. “This is up to our society. This is too big for our politicians.” (Robert Firriolo, the Legislature’s lawyer, noted that New York does not permit statewide referendums.)

In January, Gov. Andrew Cuomo proposed that the state legalize recreational use of marijuana by adults, with taxes providing revenue to fund oversight.

“We need to tell the governor to slow down on this,” said Legislator Amy Sayegh (R-Mahopac), a member of the committee.

Putnam County Sheriff Robert Langley Jr. spoke to legislators on March 18 about his opposition to the legalization of marijuana for recreational use. (Photo by Ross Corsair)

“The real issue here is the children,” added Legislator Carl Albano (R-Carmel). Were it just a question of adult use of marijuana, with no chance that children could obtain it, “I don’t think anyone would lose too much sleep.”

The sheriff cautioned that state income from marijuana operations is likely to be offset by the costs of increased law enforcement and social ills. “Can we afford this?” he asked. “Is it really worth it?” He recalled investigating a traffic accident which, he said, involved marijuana: “I walked around on a roadway which was covered with brain matter. Is that what we want in our society?”

Although he said he supports the medical use of prescribed marijuana, which is legal in New York, the sheriff warned that legalizing marijuana for recreational use could lead to increased mental health problems. He said 58 percent of inmates in the Putnam County Jail suffer from mental problems, yet New York State does not fund county jail treatment efforts. If the situation gets worse, “who’s going to pay?” he asked. “We all are.”

Moreover, he asserted, criminals would target licensed marijuana stores. “You’re taking a major risk. We’re going to take steps backward by legalization of marijuana. I want to take steps forward. We need to put our heads together and come up with a plan.”

Kristin McConnell, executive director of the Prevention Council of Putnam, shared statistics that dovetailed with Langley’s remarks. According to the National Institute on Drug Abuse, about 6 percent of high school seniors report daily use of marijuana. 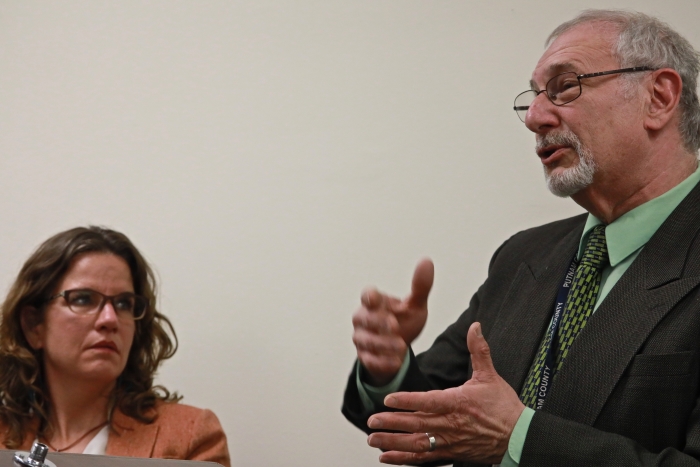 Michael Piazza, the commissioner of the county Department of Social Services, expresses his opposition to the legalization of recreational marijuana while Legislator Nancy Montgomery looks on. (Photo by Ross Corsair)

She also noted a 2018 survey that found 35 percent of high school seniors in Putnam reported using marijuana in the preceding 30 days, compared to the national average of 23 percent. In addition, she said, 54 percent of Putnam students regarded marijuana as harmful, compared to 79 percent in 2008. She said pot use among local teens outstrips their tobacco use and that marijuana is addictive and can lead to psychosis.

New York must “slow down right now and look at all the costs,” she told the committee. “It’s a health and safety issue and should be driven by science, not profits.”

Audience members jumped into the debate.

A Cold Spring resident commended Langley. “We want our kids and our families to be safe,” she said.

A Putnam Valley resident, who said that he abandoned marijuana after smoking it for 20 years without becoming addicted, objected to suggestions that pot automatically triggers addiction. He supported overall legalization of drugs under tight restrictions that include bans on teen access.

A Mahopac woman likewise called the idea that pot users are destined to become addicts “a scare tactic” and termed some of McConnell’s statements “alarmist and inaccurate.” She backed marijuana legalization, claiming that “only through legalization can we regulate what’s out there.”

Another attendee proposed a follow-up session with invited speakers who support legalization.