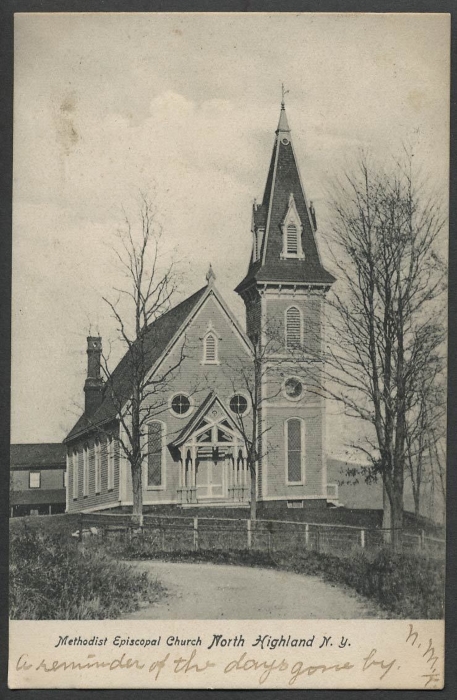 The church is shown on a postcard mailed in 1905 to a Cold Spring resident with the inscription, “A reminder of the days gone by.”

“It’s amazing how quickly we lose our history if we don’t preserve it,” Ginny Buechele lamented as she stood beside a newly erected historical plaque marking the site of one the first Methodist Episcopal churches established in Putnam County.

Built in 1812, the North Highlands church was converted into a home in 1949 and then demolished in 2006 when the intersection of Fishkill Road and Route 9 was realigned.

In 2003, Buechele learned the church would be razed and lobbied Putnam County officials to place a marker on the site. Vinny Tamagna, who represented Philipstown in the county Legislature at the time, and then-County Executive Bob Bondi, told Buechele in a letter that once the intersection was finished, a plaque would be installed.

Nothing happened for 16 years.

In the meantime, Buechele wrote a number of emails to the county Legislature. “No one ever answered,” she said. “But I never gave up.”

In 2017, she met then-County Historian Sarah Johnson (more recently executive director of the Putnam History Museum) and research assistant Jennifer Cassidy. “Sarah took the bull by the horns,” Buechele said. “She and Jen deserve a lot of credit for seeing this through.” 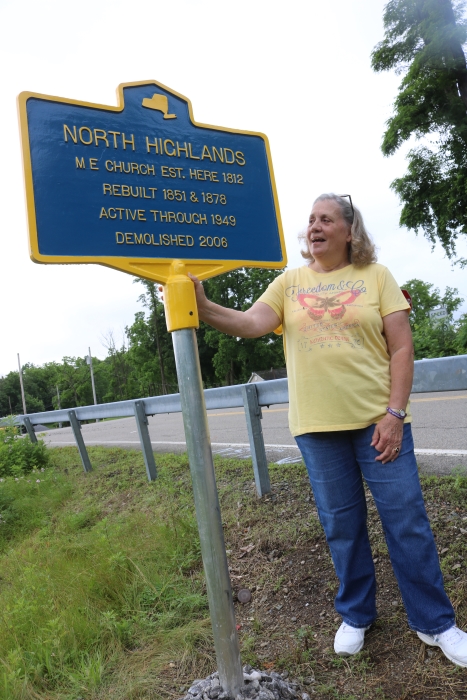 Ginny Buechele with the historical marker that she fought for 16 years to have installed in Philipstown (Photo by M. Turton)

With funds from the historian’s budget and donations from Buechele’s family and friends, the project moved forward. Earlier this month, a county crew installed the long-awaited, $1,200 marker on Fishkill Road North, west of the intersection of Route 9 and Fishkill Road.

“I’m just thrilled; it’s something I can cross off my bucket list,” Buechele said.

In an email, Tamagna, who is now the county’s transportation manager, said the marker was delayed due to a change in county leadership. “Three [county] historians later, it has been accomplished. Amen!” he wrote. “I consider those markers sacred ground, those critical places in our history.”

A resident of Fishkill, Buechele began researching her family history 25 years ago and discovered Philipstown ancestors dating back to the 18th century. Jotham Hawks, her great-great-grandfather, fought in the Revolutionary War and appears in a local 1810 census. Leonard Hawks, her grandfather, lived on East Mountain Road South and attended the church now commemorated by the marker.

4 thoughts on “The Persistent Preservationist”