Board will meet Wednesday for vote

Philipstown has reached an agreement to settle a federal lawsuit over its denial of a permit to build a 180-foot cell tower on private property on Vineyard Road, off Route 9.

The five-member town board is scheduled to meet at 7:30 p.m. on Wednesday, June 26, to vote on a resolution to approve the settlement, which would allow Verizon and Homeland Towers to instead construct at 120-foot tower.

Verizon and Homeland Towers sued in February 2018 after the Zoning Board of Appeals and the Conservation Board both denied their application for permits to construct the tower. The plaintiffs claimed the decision violated federal law.

Under the settlement proposed by Verizon and Homeland, they will submit a permit application within 60 days to build a tower disguised as a tree (including branches) at 50 Vineyard Road, and the town will issue the permit within 15 days if it complies with town laws. 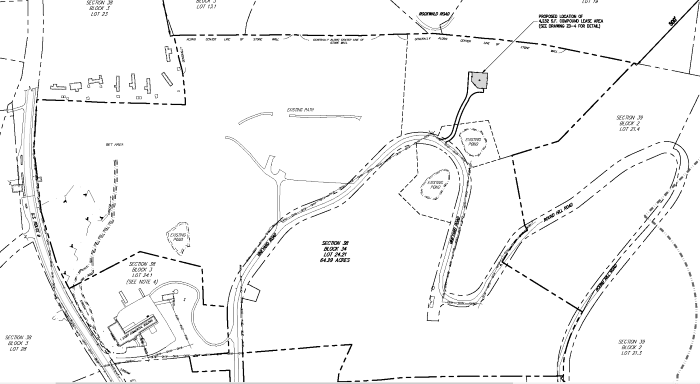 A map showing the proposed location for the 120-foot-high tower. Magazzino Italian Art on Route 9 is in the lower left corner. (Click to enlarge)

In the proposed agreement, Verizon and Homeland stipulated they would never ask to make the tower any taller. They also will provide up to $20,000 to reimburse nearby property owners to replace landscaping after construction and $21,261 to the town for expenses related to the earlier permit application.

According to the settlement document, Homeland Towers also would provide space on the tower for three emergency services antennas.

Homeland and Verizon sued the Village of Nelsonville in June 2018 after it declined to issue a permit for a separate, 110-foot tower on a wooded ridge on Rockledge Road, above the Cold Spring Cemetery. AT&T, which would use the tower, also sued Nelsonville. Those lawsuits are outstanding. As part of its negotiations, Philipstown suggested the Nelsonville tower could be constructed at the Philipstown Highway Department property on Fishkill Road.

3 thoughts on “Philipstown Has Cell-Tower Settlement on Table”