Ridership has steadily declined over the years

The Cold Spring trolley clanged its bell for the first time in 2007, shuttling passengers through the village and down to Garrison Landing. Since then it has logged more than 113,000 miles, almost exclusively on weekends, the equivalent of driving around the world more than four times.

The trolley runs on weekends; stops include the Cold Spring bandstand at the waterfront. (Photo by M. Turton)

But mileage isn’t the issue. Ridership is. In its inaugural season, late spring through fall, more than 8,000 people climbed aboard the dark green shuttle. By 2017, it served fewer than 800 passengers. 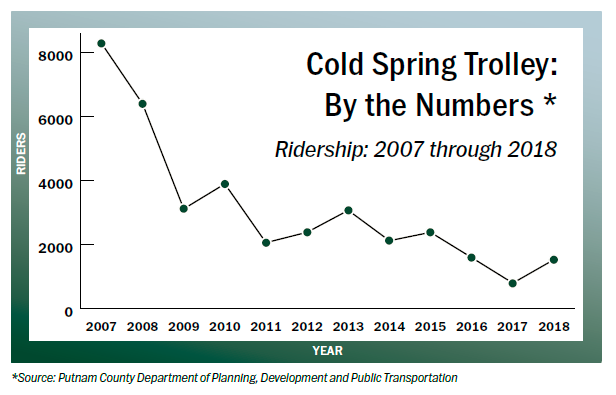 “There is something exciting, nostalgic about the trolley,” Tamagna recently explained, adding that it is worth the investment, which, he said, costs Putnam County relatively little. The county funds the trolley’s operating costs which have varied between $22,000 and $55,000 annually.

Tamagna is pinning hopes for improved ridership on increased involvement by the Cold Spring Area Chamber of Commerce and new routes that take in more cultural sites. Five weekend routes now link several local galleries and institutions, such as the Putnam History Museum, Boscobel, and Dia in Beacon, and include stops at Route 9D trailheads, train stations and key intersections.

Earlier this year, the Chamber of Commerce formed a Trolley Committee to work with Tamagna and his staff. The fledgling committee designed a logo and incorporated it in a new color brochure with a map and trolley schedule. The Chamber paid the printing costs.

The committee’s aim “is to make the trolley easier for everyone to ride,” including residents, Chamber President Eliza Starbuck, the co-owner of Flowercup Wine said this month. If the trolley is seen as an inexpensive and convenient form of transportation, “it can … benefit the local economy, environment, and quality of life.”

Starbuck said the committee advocates adding information signage at the trolley’s main stops as well as inside the vehicle, a move Tamagna is interested in exploring. At present, signage is virtually nonexistent, with the exception of an anti-heroin poster on the rear of the vehicle.

The Chamber also recently surveyed residents on their awareness of the trolley and its uses. Results have not been released yet.

To a degree, FTA rules hamper trolley operations. For example, while it doesn’t function as a typical county transit system bus, the trolley must abide by federal regulations geared to that type of transportation network. That’s why a second trolley had to be purchased, to ensure that a backup is always available — a questionable stipulation for a special-purpose vehicle such as the trolley. 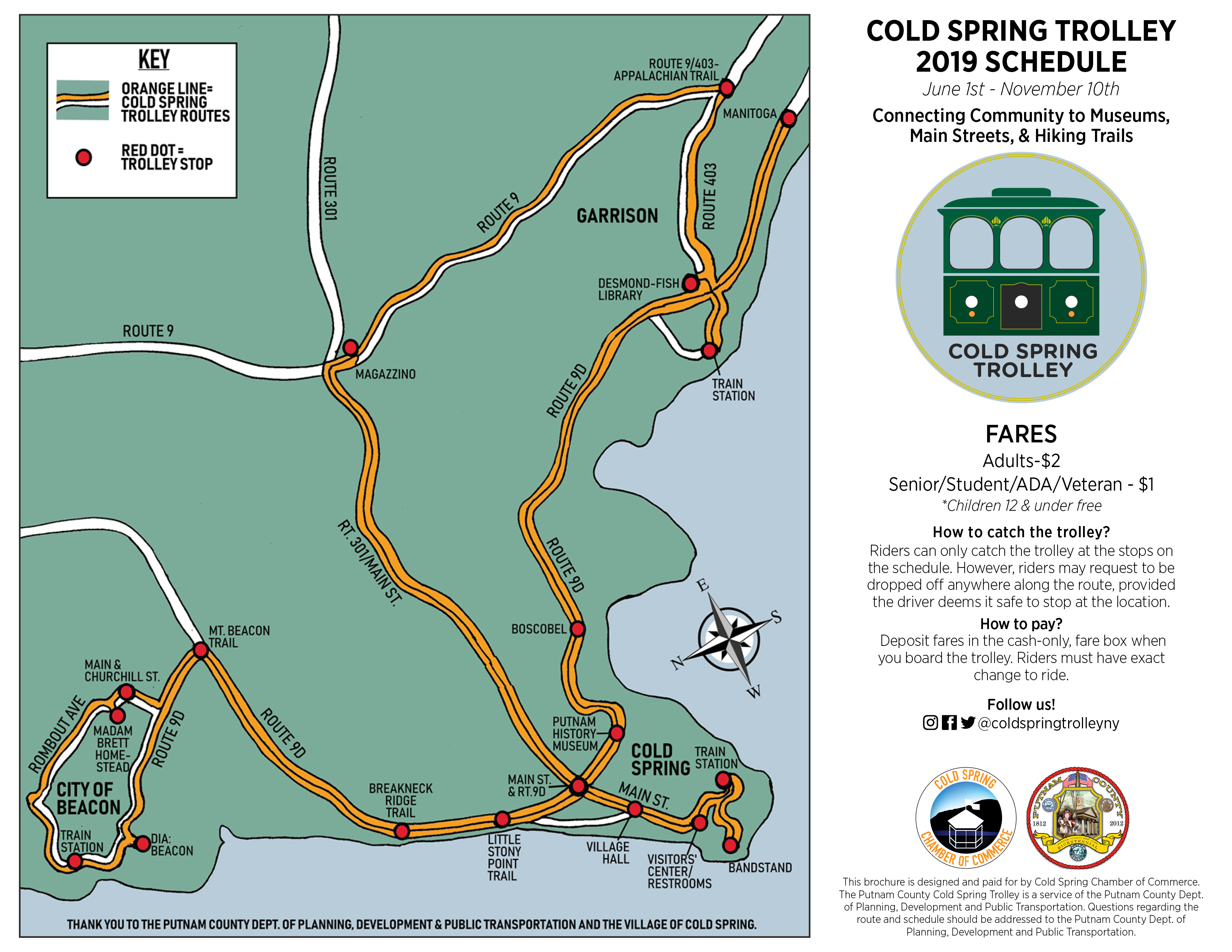 A map of the trolley’s routes (click to enlarge)

Federal regulations also prohibit trolley drivers from handling money. As a result, riders must board with exact change. At a trolley committee meeting hosted by Magazzino this spring, the possibility of creating an app enabling riders to pay via smart phone was discussed but has not been developed yet.

Tamagna admits the trolley has not had strong ridership for several years. But the self-described optimist said that “with the involvement of the Chamber and linking sites such as Magazzino, Manitoga and Madam Brett Museum in Beacon, I think it will enjoy a renaissance.”

2 thoughts on “Trolley Struggles to Get on Track”