Cold Spring may host a parade with a difference in November as part of a collaborative event organized by the Magazzino Italian Art Foundation.

Members of the Cold Spring Village Board discussed the event at their Aug. 27 meeting, with more details expected over the next few weeks.

Although Magazzino later emphasized that the project is still in the planning stages, the tentative date is Saturday, Nov. 16, beginning near St. Mary’s Episcopal Church. It would be choreographed by Marinella Senatore, an Italian artist known for merging popular culture, dance and music with “joyful public participation.” 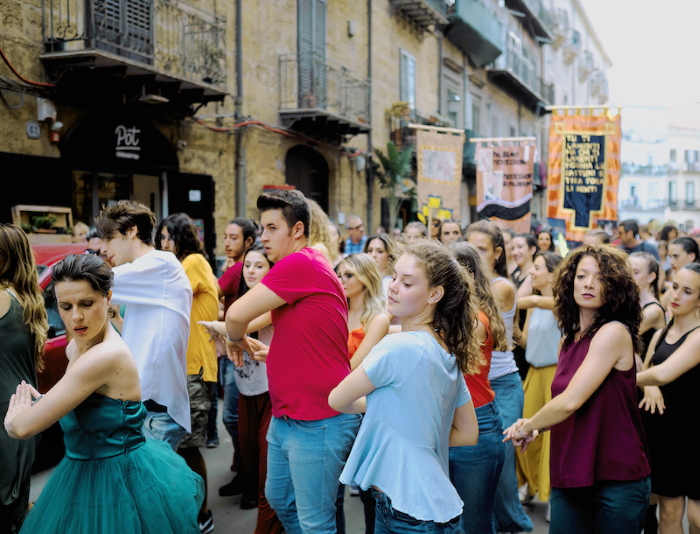 In June 2018, Marinella Senatore organized a public performance, “Palermo Procession,” in Italy. A similar event has been proposed for Cold Spring. (Marinella-senatore.com)

Senatore has organized public performances in Italy, such as the “Palermo Procession” in 2018, during which residents danced in the streets, and the four-hour traveling Modica Street Musical in 2016. Among her recent sculptural works is “Protest Bike,” a bicycle outfitted with a banana-shaped seat, four megaphones and a bulb horn.

Magazzino staged an earlier public art performance in Cold Spring when, in November 2017, it invited Michelangelo Pistoletto to re-enact his 1967 performance piece, Scultura de Passeggio (Walking Sculpture). The artist and residents pushed a sphere of newspapers through the streets near the waterfront.

In early September, community groups and individuals will be invited to participate in the parade alongside performers recruited by Senatore. Described as a “creative procession,” the parade will conclude with a finale at the riverfront. The procession will pause for performances along the route.

While the event is scheduled to last two hours, the time spent on Main Street will likely be less than an hour, said Thomas Huber, a representative of Magazzino, which operates an art museum in Philipstown. 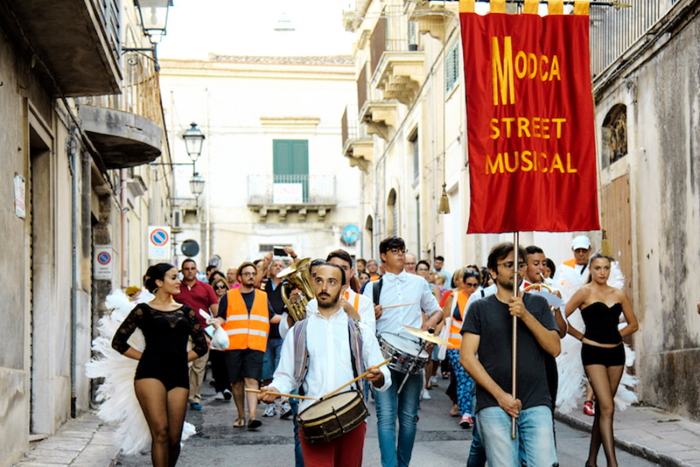 The four-hour traveling Modica Street Musical was staged in 2016. (Marinella-senatore.com)

The proposal brought back unpleasant memories for Trustee Lynn Miller, who recalled during the meeting that the village hosted a county bicycle event in 2012 and 2013 that hurt local businesses when race participants filled Main Street parking spaces. She said steps should be taken to ensure merchants are not similarly affected by the parade.

But Eliza Starbuck, president of the Cold Spring Area Chamber of Commerce and co-owner of Flowercup Wines, said she felt the parade “will be fun for residents and visitors” and a great addition to the community.

Mayor Dave Merandy was generally supportive of the event. “The idea is that the performance is the parade,” he said, adding that Magazzino is well-organized and has the resources to put the event together. “I’m willing to take a chance,” he said.

Traffic issues were on Deputy Mayor Marie Early’s mind. She suggested the parade include only “mini-performances,” with major performances being held at Dockside Park.

The mayor said Magazzino would be responsible for the cost of extra policing. He asked Huber to provide a more accurate estimate of the number of participants, a factor he said would help determine the number of officers required. Huber had earlier said he expected anywhere from 40 to 100 people to take part.

One thought on “This Parade Will Be Different”