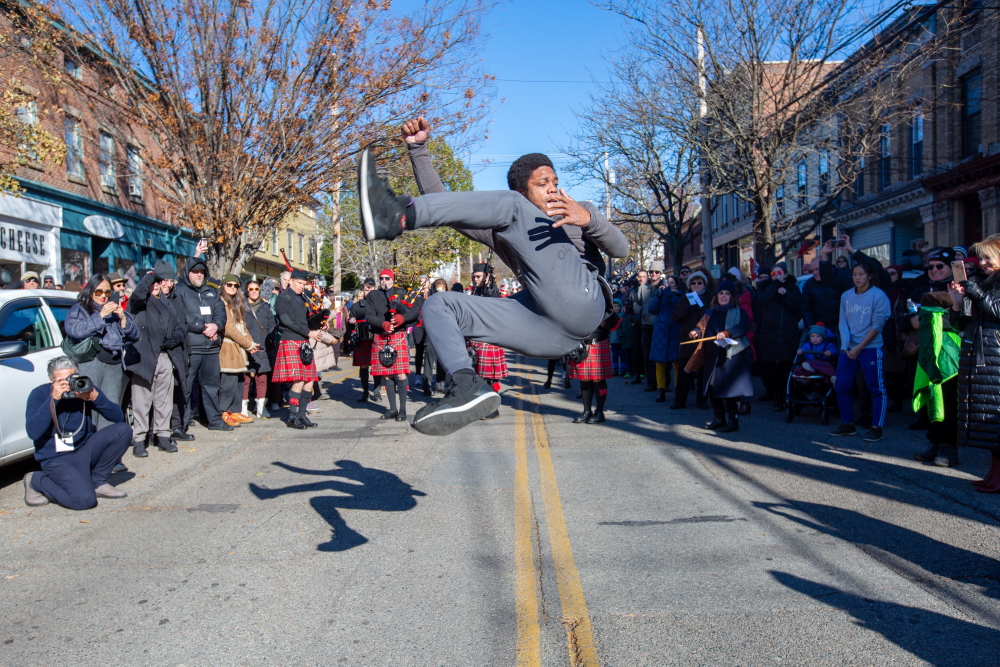 Tavon McVey was one of two practitioners of parkour who appeared on Main Street in Cold Spring on Saturday (Nov. 16) as part of a parade led by Italian artist Marinella Senatore. (Photo by Alexa Hoyer/Magazzino)

Performances took place on — and above — Main Street

With nearly 100 performers from around the Hudson Valley strutting their stuff, Main Street in Cold Spring became a mobile stage on Saturday (Nov. 16) for a parade organized by the Magazzino Italian Art Foundation.

Magazzino, which operates a nonprofit museum in Philipstown, commissioned the Italian performance artist Marinella Senatore to create the event, which it described as a “monumental procession and performative celebration of community.” It was curated by Ylinka Barotto of the Moody Center for the Arts at Rice University in Houston.

Senatore, who lives and works in Rome and Paris, is known for merging popular culture, dance and music with “joyful public participation” and for “exploring the creative power of crowds,” according to Magazzino. In 2016, she created a four-hour traveling street musical in Modena, Italy, and in 2018 a similar performance parade in Palermo, Italy. 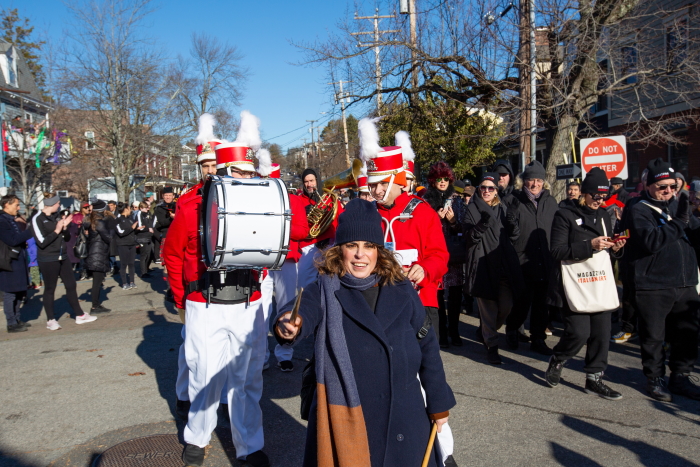 Vittorio Calabrese, director of the Magazzino Italian Art Foundation, said it was delighted to work with Senatore, “an artist renowned for her ability to foster new connections between people.”

Magazzino sponsored another public art performance in Cold Spring, in November 2017, when it invited Michelangelo Pistoletto to reenact his 1967 piece, Scultura de Passeggio (Walking Sculpture). The artist and residents pushed a sphere of newspapers through the streets near the waterfront.

Unlike traditional parades, the several hundred onlookers on Nov. 16 were invited to join the procession, enabling them to be surprised by performances along the route.

As the crowd made its way from St. Mary’s Episcopal Church westward to the riverfront bandstand, it paused several times for performers in the street, on porches and perched in second-floor windows. The eclectic mix included baton-twirling, singers, a marching band, a poet, bagpipes, a DJ, drummers, a gospel choir, soccer players and Native American dancers.

Mezzo-soprano Gabriella Mikova Johnson, who lives in Beacon, sang from the upper windows of two buildings. “It was thrilling and scary,” she said. “There was no rehearsal, no accompaniment. It was fun to watch people’s surprised reactions.”

Residents who answered an open call for dancers were invited to attend a workshop at Magazzino in the days before the parade led by Senatore and Nandhan Molinaro and Elisa Zucchetti of the Berlin-based dance company Espz.