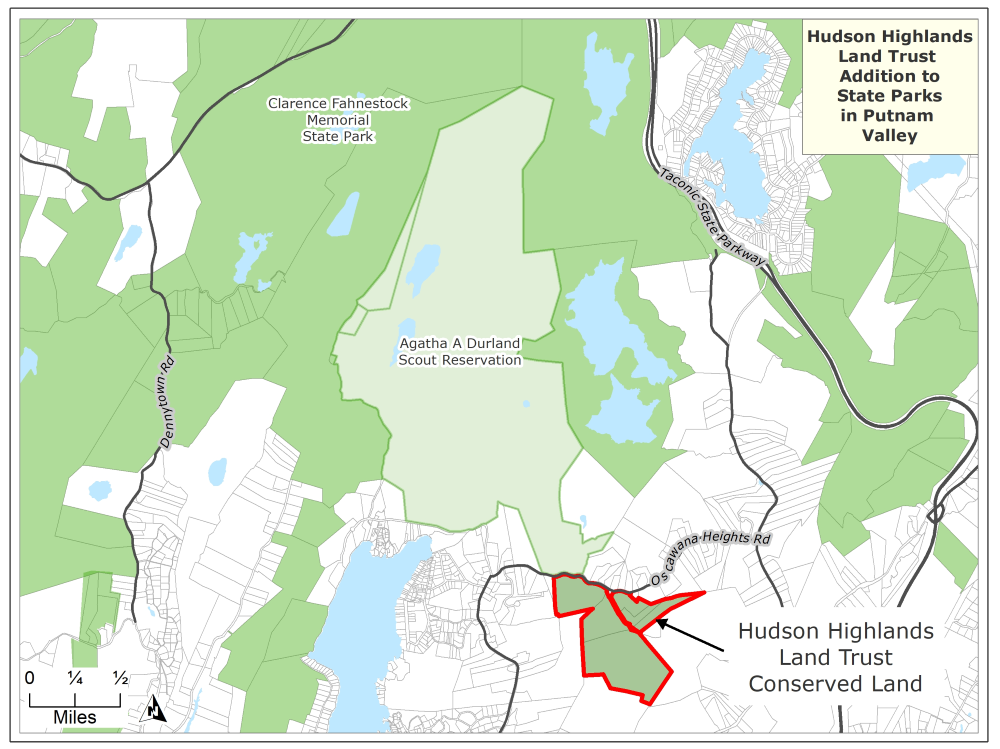 The 150 acres being added to the Fahnestock State Park in Putnam Valley are marked with red borders. A hiking easement through the Scout reservation will connect the parcels to the rest of Fahnestock. (HHLT)

New York State plans to add 965 acres to the Hudson Highlands State Park Preserve and 150 acres to Fahnestock State Park as part of a proposal to preserve 4,000 acres in the Hudson Valley.

Gov. Andrew Cuomo endorsed the move earlier this month, saying in a statement that “these investments will allow us to add ecologically significant lands and new trails to seven state parks across the region, further promoting tourism and building on our efforts to strengthen this world-class outdoor destination.”

Under the plan, the state would spend $20.6 million of its Environmental Protection Fund to acquire the 4,000 acres. That will include $11.4 million from the fund and Hudson Highlands Conservation Act grants to expand six parks that include Hudson Highlands and Fahnestock.

In Dutchess County, the plan would add the 945-acre Scofield Ridge, which connects Breakneck Ridge to the south and Fishkill Ridge to the north, to the Hudson Highlands preserve.

The Notch, Breakneck Ridge and Wilkinson Memorial trails pass through the parcel along the ridge, although the property is privately owned. By adding the 945 acres, “those trails will now be on park property,” said Evan Thompson, manager of the Hudson Highlands State Park Preserve. “It’s the last remaining big chunk of the Hudson Highlands that was missing. Now nobody will be able to come along and say, ‘Well, you can’t have those trails there anymore.’ ”

The preserve would also gain a 20-acre parcel on the old Glenclyffe property in Garrison to connect Arden Point to Route 9D and Castle Rock.

“If you enter the Garrison Institute/Philipstown Recreation Driveway, there’s a little pull-off to the right; that’s the beginning,” Thompson explained. “There’s a trail that goes through there called Marcia’s Mile, which has been there for a long time. That’ll probably remain, although it might be re-blazed.”

The 150 acres that would be added to Fahnestock don’t touch the current park but will increase access to it. The acreage covers two parcels that lie to the south of Oscawana Heights Road in Putnam Valley, across from the Durland Scout Reservation. While the Scout reservation is private property that isn’t part of Fahnestock, there is a public access easement through it that allows hiking. That easement would connect the current park and the 150-acre addition, said Michelle Smith, executive director of the Hudson Highlands Land Trust, which is partnering with the state to buy the property.

Using maps and public data, the land trust graded undeveloped and lightly developed land throughout the Highlands to determine which parcels should be a priority in terms of preservation, taking into consideration things like water resources, scenic value, wildlife protection, buffer zones, or areas that improve access to existing parkland. “This property had come up as a high priority, because of where it’s located and its importance to natural resources,” Smith said.

The land trust had been negotiating to buy the property over the past few years when a state grant came through that would allow the group to put an easement on the land but not own it outright. Smith said the trust then went back to the state to see if additional state and federal funds could be found so that the state could buy it outright. That deal will be finalized this year.

Although a full inventory of the 150-acre site’s flora and fauna has not been conducted, bear and coyote scat has been found on the property, she said, and it’s hoped that the land would act as a wildlife corridor to connect Fahnestock and the trust’s Granite Mountain parcel in Putnam Valley.

Box turtles have also been found on the acreage, and the parcel’s vernal pools are an important habitat for marbled salamanders, she said. Other threatened species that could benefit include cerulean warblers and wood thrushes, who depend on mature deciduous forests for survival, and bats, which have been seen foraging there.

Human access to the 150 acres would be determined by the state, she said. There are no plans for trails or infrastructure, although she speculated that a small bit of work along the road could make a huge difference.

“That part of Oscawana Heights Road is kind of flat, and we could conceivably put [in] an access point, maybe a place to park,” she said. “All those roads are big hills and valleys and steep slopes. As soon as you pull off the road, it’s usually too steep, so it’s hard to find those good access points.”