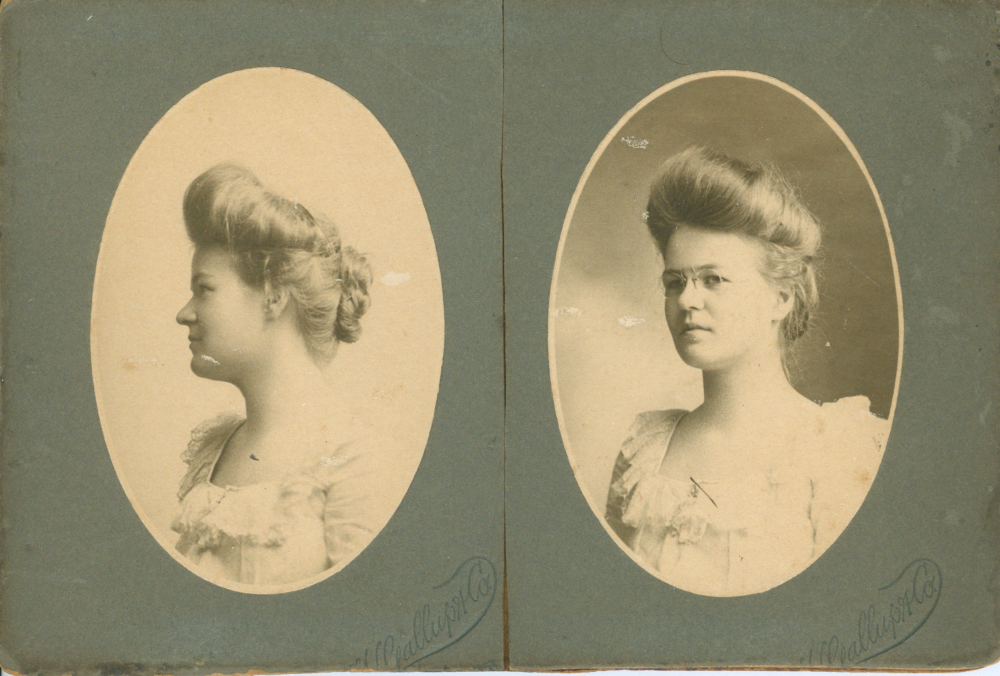 Georgianna Hallock in 1901, soon after her graduation from Newburgh Academy

When Claire Goldstein and her husband, Abbey, purchased a home in Cold Spring about 10 years ago, she showed photos of their new house to her elderly father, Ralph Greenlaw Jr. That prompted him to recollect that after his parents, Ralph and Georgianna Greenlaw, were married in October 1907, they rented a home in the village, on Parsonage Street.

“This was a total coincidence, which I knew nothing about,” Claire recalls.

About a year before their marriage, Ralph, a Harvard-educated civil engineer, had relocated to Cold Spring from Manhattan to work on the New York City aqueduct, then being built through Garrison. He had met Georgianna Hallock, who grew up in Milton, in Ulster County, at Columbia University, where she was a librarian.

Their eldest child, Frances, was baptized at St. Mary’s Episcopal Church in 1909, and Ralph contributed $5 to help pay for a new boiler. In the early 1920s, the family — now including three children — moved to Teaneck, New Jersey, and Ralph commuted to his engineering jobs in Manhattan.

After her father’s death, Claire inherited her grandmother’s diaries, including some in which Georgianna recorded her impressions of Cold Spring. Below are excerpts. (There were no entries in 1908.) 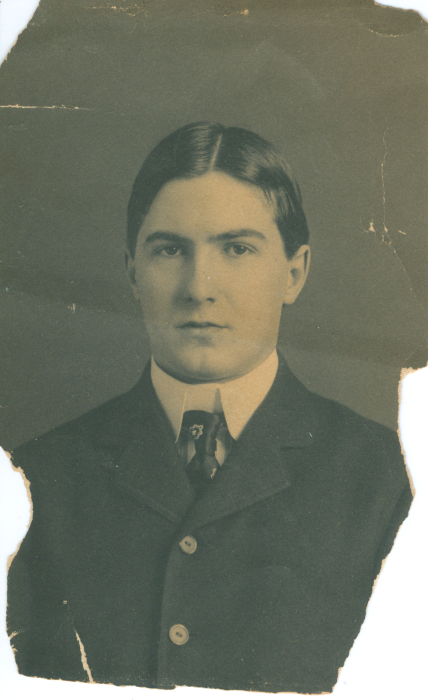 Ralph Greenlaw as a young man

Off with Ruth H. and Maude T. at 11:29 for Cold Spring, jolly trip and Ralph with a Mr. Stone met us. Went to R’s house [where he rented a room] and after he had collected lunch started for our climb. Ate lunch by a lovely brook side and it was no end jolly.

About three we started up [Mount] Taurus [aka Bull Hill] and for two hours we climbed or walked for the road was excellent. Such beautiful sweeps of country — east up a lovely valley, west over Storm King and Crow’s Nest, south and north the river twisted among the hills. It rained some, but it only softened the dainty greens, such exquisite greens they were. It helps to make life livable.

Back to such a merry supper in Ralph’s room, which is so pleasant. 7:30 came all too soon and we turned our faces southward.

Another glorious day at Cold Spring! Ruth and I went up on the 7:54, arrive much earlier. We started without delay for Taurus and after a very warm climb arrived at the brook at 12:00. There we had lunch, the usual jolly affair.

We reached the top of the mountain about 1:00 and sat on the rocks and lay in the grass until a thunderstorm drove us down. The view was as beautiful as ever and the storm looking north over a truly Storm King one of the grandest sights ever. Had a very romantic trip down the hill in the rain, lovely laurel. Dandy feed in R’s house and back on the 7:30.

Such a glorious day and so delightfully spent! After my usual rush for the 12:34, Mother and I arrived in Cold Spring for “my first official visit.” The house is a dear little place that will be so cozy when we get it furnished and the dilapidated garden though some of it is OK, has great possibilities. 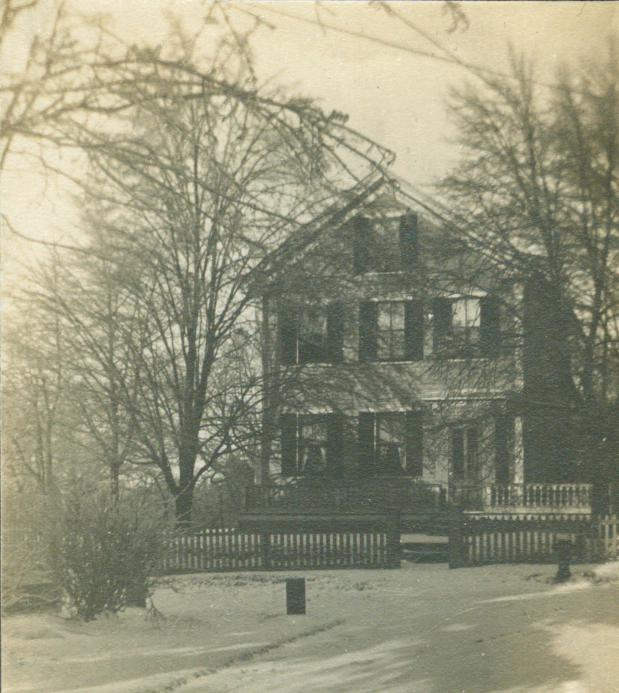 The Greenlaw home in Cold Spring

Later went for such a beautiful drive — that Highland country is so lovely! There were one or two magnificent views of the river and mountains. Had a tiresome wait at N [Newburgh] for the [steamer Mary] Powell and then such a nice evening together.

It’s been such a joyful year and I am entering on a bigger and fuller life. Probably there will be just as hard places as in the old but I have Ralph to help me out now, and he does such a lot.

A grand day and in the afternoon I donned my best clothes and went over to call on Mrs. Haldane. She had gone to Fort Monroe so Mr. H entertained me. They certainly have a very pleasant house over there. Such a lovely walk through the Morris Estate, saw an indigo bird.

I smoked the upstairs good and proper [because of inadequate ventilation for the fireplace] so it took all the a.m. to clean up, it was about the worst mess I ever got into. In afternoon I went down to Constitution Island. It is perfectly beautiful down there and we got a lot of azaleas and lady slippers. It’s a lovely walk down there. 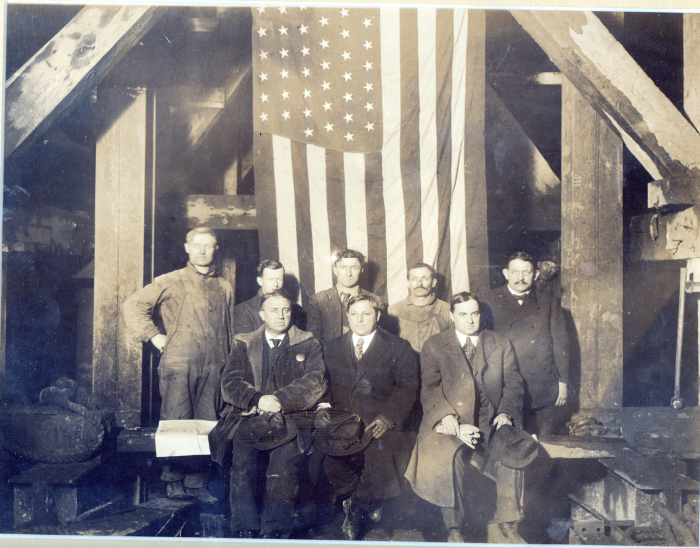 Ralph Greenlaw (second from right) and other contractors are shown during construction of the New York City aqueduct. According to Claire Goldstein, her father (Ralph Jr.) said that New York City bid out the work in sections, and the crews from two sections would eventually meet up and, in this case, memorialize the occasion with a photo.

In a.m. walked with Dad and Ralph up the Bull Hill portal. Such a contrast to the time I was there in April — it’s all torn up and looks awful.

A grand day & I did have such a good time. The a.m. was busy as usual but in the afternoon Ralph and I went to the horse show down at Garrison. It was fine, such beautiful horses and so well ridden and driven — it was certainly enough to make me envious. Some of the beasts were perfect beauties. Always makes me wish to be rich when I see them. Lovely drive home in the gloaming [twilight].

A beautiful day but I didn’t enjoy it much for I was in such a temper with Ralph for flatly refusing to go to the dance tonight which was very selfish of him, I think. In the afternoon Eula and I went for a lovely drive by Lake Surprise and down Breakneck. The foliage was lovely and the whole drive great but such a hill. Sat home all p.m. and cursed my luck!

Spent most of the a.m. mending… I settled down to sew but there seemed to be a lot of do. Anyhow, it was very late when I started downtown… Frances was with me and I had to push her up the [Main Street] hill alone, which was no fun.