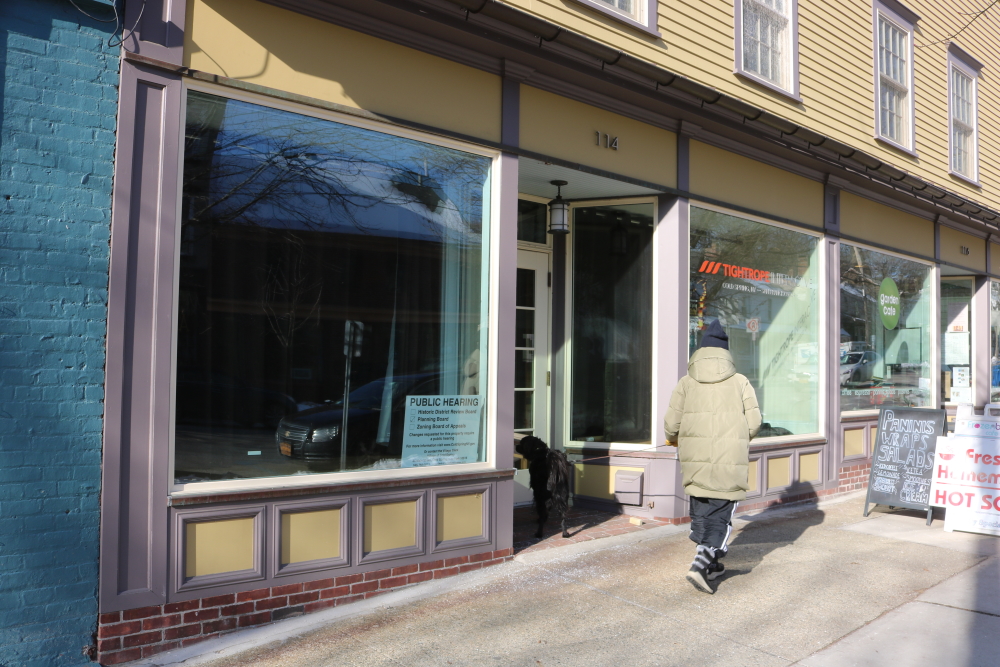 A women's clothing store and cafe is planned for the space now occupied by Tightrope Interactive. (Photo by M. Turton)

A women’s clothing store and cafe plans to open in the spring at 114 Main St., filling a space that will be vacated in March when the current tenant, the marketing technology firm Tightrope Interactive, relocates to Beacon.

Jacqueline Azria, a Brewster resident who works as a fashion and creative consultant in Manhattan, said she will open Paulette’s on May 1. “I love Cold Spring and have wanted to open my own shop for a long time,” she said.

The rear two-thirds of the shop will be devoted to women’s clothing, most of it new and including French brands, she said. The store will be named for her her mother. The front will be a cafe with coffee and pastries.

Her plans are before the Cold Spring Planning Board because of the change of use from office to retail and cafe.

In his report to the Village Board on Jan. 14, Planning Board Chair Matt Francisco said as many as 11 parking waivers will be required for the shop and cafe. The village code requires new businesses to provide off-street parking based on their square footage and, with eateries, number of seats. Because that is almost never possible, stores can instead buy one-time, $250 “waivers” from the village for each required spot.

The system was introduced by the village in 2010 with the idea that the revenue generated would offset the cost of parking enforcement and maintenance of the municipal parking lot on Fair Street. If her plan is approved, Azria would pay $2,750 for the 11 waivers.

At last week’s Village Board meeting, Deputy Mayor Marie Early suggested that trustees might want to reexamine parking waivers. As part of the ongoing village code update, all fees were removed from the code and placed in a master schedule, a move which would no longer require the board to hold a public hearing each time a fee is changed.