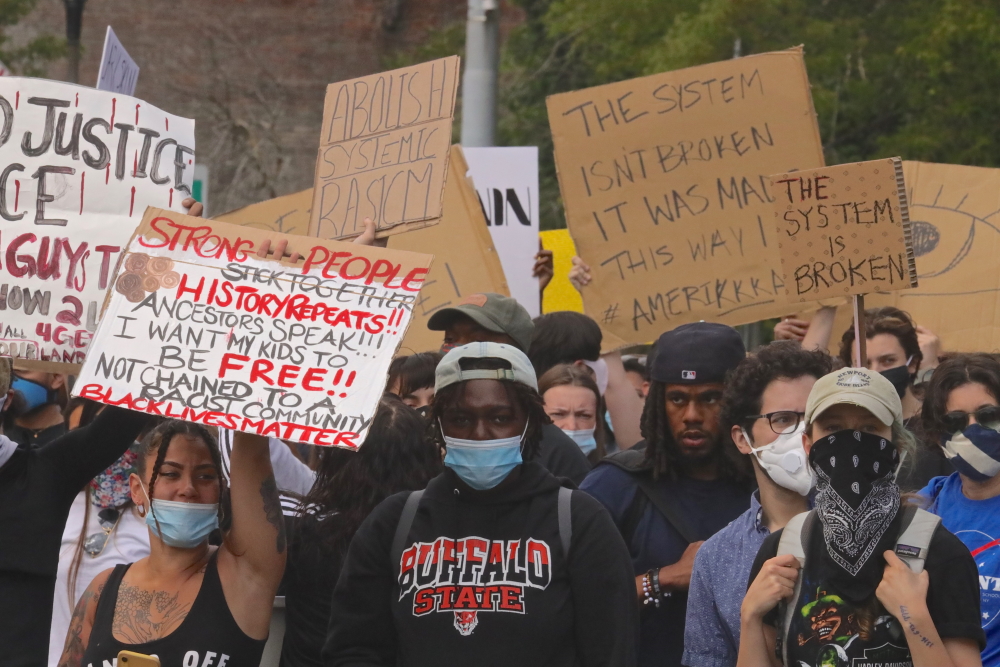 Ciarda Hall, Stefon Seward and Xavier Mayo had not met before Monday (June 1), but all three said they felt an urgent need to make a statement following the May 25 killing of George Floyd in Minneapolis.

Floyd’s death while in police custody has sparked protests across the country against police brutality and racism, including demonstrations at the White House and in New York City, Poughkeepsie, Carmel, Cold Spring and Beacon.

Hall, a 23-year-old model who graduated from Beacon High School in 2015, said she felt she had to respond in the city where she grew up. Since Floyd’s death, “I’ve been crying every single day,” she said. “Nothing else matters right now.” 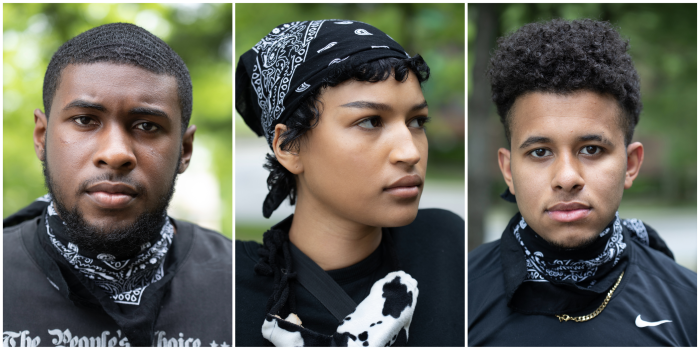 Xavier Mayo, Ciarda Hall and Stefon Seward led a protest on Monday (June 1) in Beacon against brutality and racism following the death in Minneapolis last month of George Floyd. (Photos by Meredith Heuer)

She said she shared details anonymously on social media about a peaceful demonstration in an “I heard this was happening” way, calling for protestors to meet at the Chase Bank parking lot at 2:45 p.m. on Monday to march west on Main Street to Polhill Park.

Masks and social distancing were encouraged, as were signs. “We have to come together to make a change,” she wrote, adding that she hoped the numbers would rival participation in the annual Spirit of Beacon Day.

“When I showed up and saw how many people were there, I’d never seen anything like that in Beacon before,” she said. “It was so powerful. Both my parents came and they were like, ‘Holy shit.’ ”

While Hall started the ball rolling, she concedes she wasn’t prepared to lead a rally. “I had no idea what I was doing,” she said. 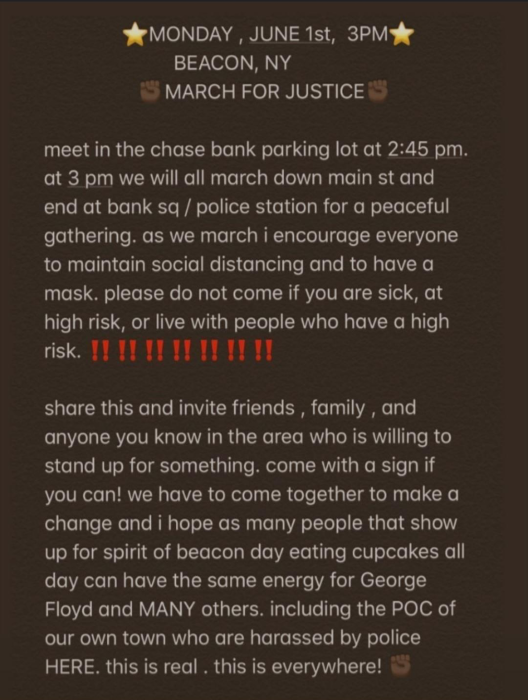 When she arrived, Seward, 20, who graduated from Beacon High School in 2017, was already hyping up the crowd. “This kid was running things,” she said. “I immediately started crying.”

The pair, each carrying signs that read “Black Lives Matter,” led hundreds of marchers down Main, which had been closed to traffic by Beacon police. Seward led chants of “I can’t breathe” — which Floyd told officers before he fell unconscious — and “Say his name.” A growing chorus chanted in response.

Seward said he, too, cried when he saw a video of Floyd being detained, with an officer’s knee on his neck, and was inspired to “be loud in this moment.” A day later, his voice hoarse, Seward recalled his mother, who is white, warning him on his 18th birthday that he should be wary of police officers, that he was a target.

“That’s why I stood up and started screaming,” he said.

When the rally arrived at the park, Hall and Seward took the “stage” at the Beacon Visitors Center, where hundreds of marchers — nearly all wearing masks — continued a call-and-response.

There, Mayo, 19, who attended Beacon High School as a freshman before transferring and graduating from The Hill School, a prep school about 35 miles outside of Philadelphia, joined the two strangers on stage. 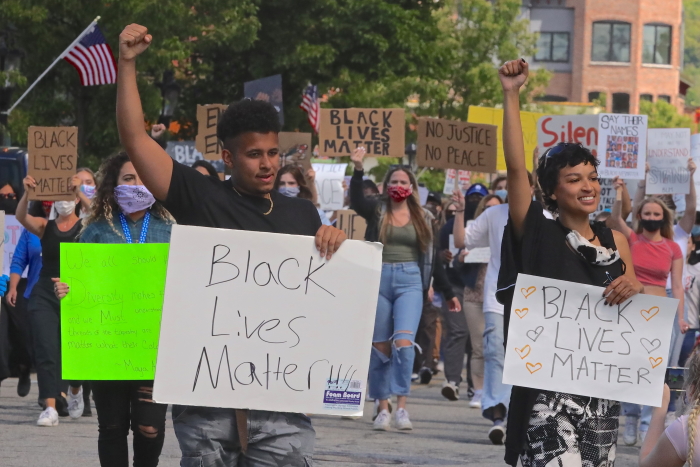 Mayo, who is 6-foot-7, is a freshman studying pre-law and playing basketball at the New Jersey Institute of Technology. “I’m what people fear sometimes,” he said. “To feel that love and support” at the rally “was a really big deal.”

Like all reasonable people, we are outraged by the actions of the officers in the killing of George Floyd and strongly condemn them. We also support the First Amendment and the right to peacefully protest and, as is our duty, stand against those who make that impossible by resorting to violence, destruction and riot.

In our continued efforts to be transparent and accountable we were one of the first departments in our area to implement body-worn cameras by all of our patrol officers in 2018…. All of our officers undergo yearly training on our use-of-force procedures as well as current case law. This includes de-escalation strategies, prevention of positional asphyxia and the duty to intervene in cases of excessive force.

Since the unconscionable murder of George Floyd by Minneapolis police officers last week, we, the members of the Beacon PBA, have been struggling to find the words to express our emotions. It should not have to be said, but absolutely needs to be said that each and every member of the Beacon PBA condemns the murder of Mr. Floyd and the actions by all four of the involved officers in Minneapolis.

As police officers we take our oath seriously to protect and serve each and every one of you and your constitutional rights regardless of race, gender, religion, political party or age. On the much larger scale, as human beings we respect and cherish all life. That is why watching the video and following this incident, it is sickening to all of us to see evil in those that have taken similar oaths.

Please believe that we are proud to service the City of Beacon and respect the lives and rights of every single resident, business owner and visitor. We will still stand proud wearing the uniform and patch of the City of Beacon Police Department. We will stand tall and strong with you and protect your right to express your voices, beliefs and causes in a peaceful and safe setting.

The tragic police-custody death of George Floyd on May 25 in Minneapolis is not a reflection on all law-enforcement officers.

I, along with the law-enforcement community, here in Putnam County at the Sheriff’s Department and beyond, acknowledge that the conduct of the officers involved is not acceptable, nor will it be tolerated. Throughout the country, law-enforcement professionals are taught proper investigative and arrest techniques and it is clear that this training was not utilized on that day by those involved.

The [actions of the] four Minneapolis officers involved in the death of George Floyd goes against our principles and brings discredit to an honorable profession which holds integrity to the highest standard. I can assure you that the vast majority of the law-enforcement officers in the U.S. are good police and do not behave in the manner that was displayed on that horrible day.

As police officers we strive to be members of the community we serve and build relationships with everyone with whom we come into contact. Sacrifices are made by the men and women who put their lives on the line every single day to be your shield. Our community-based relationships are vital for everyone as it makes all of us better and it enables law enforcement to serve the public we are sworn to serve and provide a safer environment for everyone.

On Friday night, I watched television footage of police cars burning in Brooklyn and read the news that protesters tried to storm the 88th Precinct station house. An officer I knew was struck in the head with a brick and ended up in surgery. The department is now working under an emergency schedule first used during civil unrest in the fall of 1969.

I called up my friends on the force. They were shaken; they sensed a hostility that was beyond anything they had felt before. It seemed woven into the city itself. What had happened to George Floyd was a brutal crime, and the officer’s action supported the murder charge, but New York police were powerless to disentangle themselves from the wider web of anger toward their profession. Read more…

Seward is a sophomore at SUNY Orange. He’s studying to become a lawyer, as well, and had planned to join the U.S. Army after college. The recent events, however, have caused him to reconsider military service, he said.

Hall has traveled around the world and last year appeared in Rihanna’s Savage x Fenty fashion show in New York City. She is also an aspiring actor.

On Tuesday, the day after the protest, the three exchanged numbers.

2 thoughts on “Residents Rally Against Brutality”