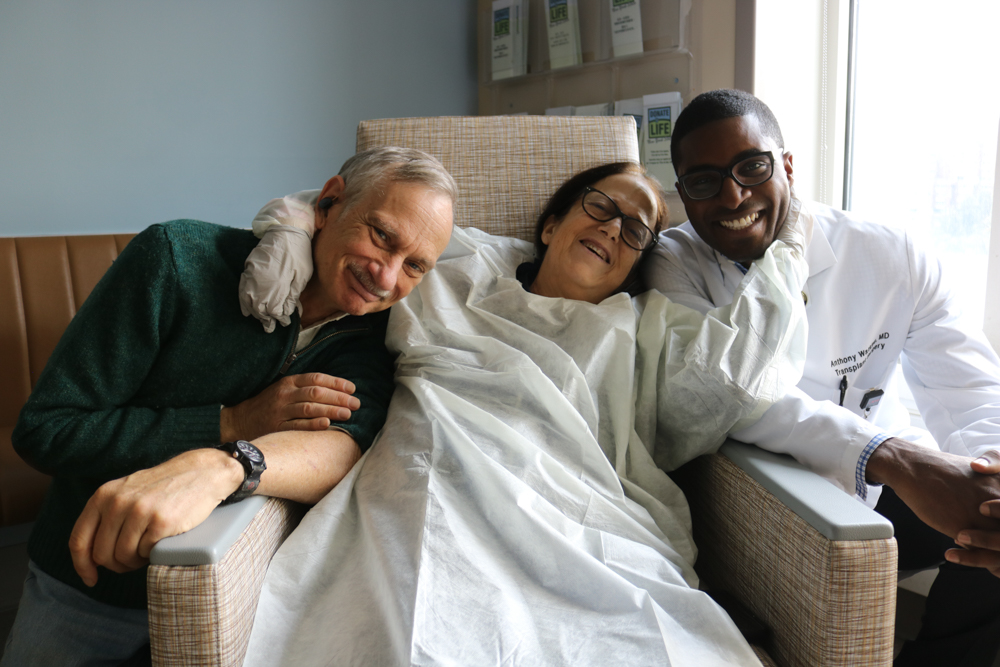 A meeting in which the recipient of a new kidney was able to meet her donor “face-to-face” was cathartic, despite happening over Zoom.

The Current has chronicled Leesa Thompson’s journey from Feb. 23, 2018, when she learned she needed a new kidney or would face dialysis and a shortened life. More than 100,000 Americans are facing this dilemma.

Thompson, who lives in Cortlandt Manor and has been a member of the Beacon Sloop Club for more than 35 years, was lucky. A donor was found, and seven-and-a-half months later she underwent transplant surgery.

In the end, two people donated kidneys on Thompson’s behalf.

Ed Holowinko of Norwalk, Connecticut, didn’t know Leesa but agreed to donate after learning of her predicament in an email blast sent by her partner.

Because their blood types didn’t match, Thompson couldn’t receive Holowinko’s kidney, but he could still donate through what is known as a “paired exchange”: Two people in need of kidneys who each have incompatible donors “swap” the organs. 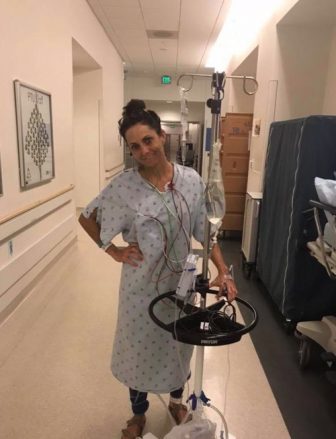 Dr. Kerry Tanner after her surgery in which she donated a kidney to someone who was then a stranger (Photo provided)

Meanwhile, in Peoria, Arizona, Dr. Kerri Tanner was about to become the other part of the equation. She had joined the paired exchange program as an “altruistic donor” — someone who offers a kidney without knowing who will receive it.

After two attempts to donate fell through due to the recipient’s health issues, Tanner was matched with Thompson.

Because the psychological effects of organ transplant can be challenging, the program doesn’t allow a donor and recipient to learn each other’s identities for at least a year. Thompson only knew her kidney was coming from California.

On Oct. 9, 2018, one of Tanner’s kidneys was removed at UCLA Hospital in Los Angeles, flown to New York and implanted into Thompson the next day.

Simultaneously, one of Holowinko’s kidneys was removed, sent to Massachusetts General Hospital and implanted in a recipient who has not been identified.

This week, Tanner, Thompson and Holowinko attended the Zoom meeting and invited a reporter from The Current. Ten days earlier, Tanner had introduced herself to Thompson in a letter. “I cried and cried and cried when I read Kerri’s letter,” Thompson said.

She said receiving Tanner’s kidney was a huge relief, though mixed with months of frustration and depression, which is a side effect of the medications to keep her body from rejecting the organ. Thompson also had complications such as a hernia and a heart condition, which can’t be treated until she is stronger.

She broke down while thanking Tanner for helping her, expressing guilt over her slow recovery. “I feel sad that I’m having all these complications,” she said. “It’s not your fault, Kerri; I wish I was better!”

“It’s not your fault, either, Leesa,” Tanner reassured her.

“I’m sorry I’m not fully able to appreciate the gift you’ve given me,” Thompson continued, saying she has been unable to return to work.

While the coronavirus has kept Thompson at home, she walks regularly and has started an online fitness group that Tanner has joined.

Thompson said with a laugh that she had nicknamed her kidney “Baby Kerri.”

Asked why she donated an organ to a stranger, Tanner, a senior team leader with OptumCare in Arizona, said: “I felt a calling. To feel you have helped someone in a way that 99.9 percent of the people will never know — that’s elation. I’m incredibly proud of it. I’m ridiculously proud of my children, but this is a close second.”

Tanner said the long wait to learn who received her kidney was difficult. She was cautioned during counseling before being approved as a donor that she might never know. “Not knowing if my kidney made someone’s life better was something I had to put out of my mind daily,” she said. “But the pros far outweigh the cons.”

Holowinko said it feels “a little strange” to still not know who received his kidney, although he recently learned the recipient is doing well.

Giving up a kidney “puts a different perspective on life,” he said. “People waste their lives on stupid things. There’s so much more we can do.”