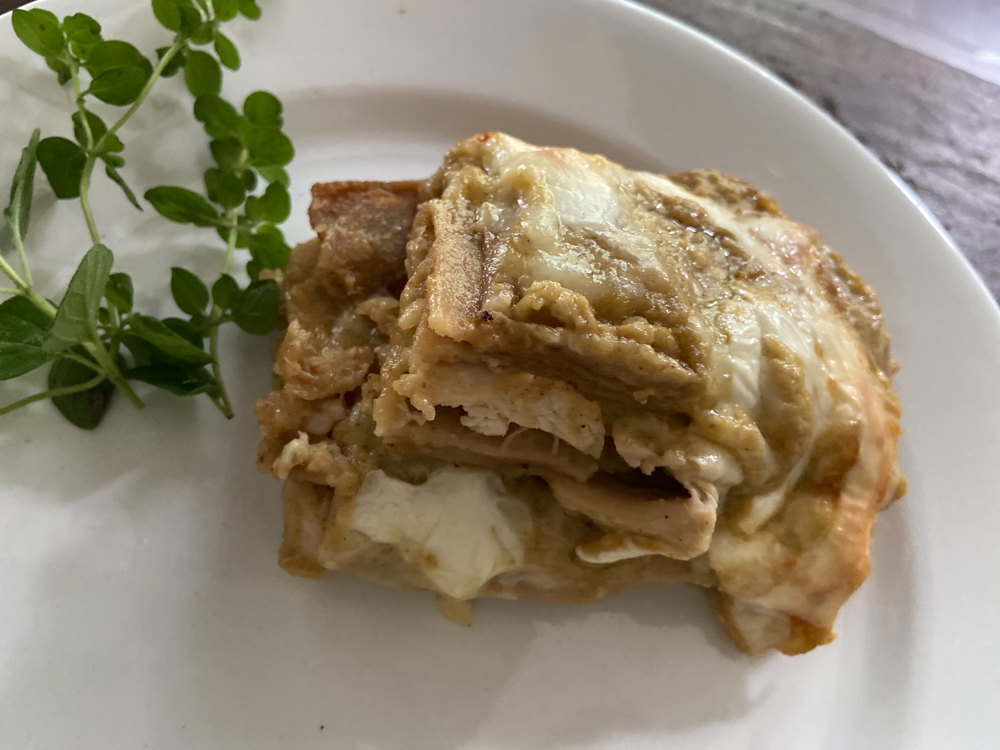 Two of our boys went back to college last week. After dropping the second of them off in Vermont, I secluded myself up north for a quiet sojourn. The day I got back, I sat down at the kitchen table with our still-at-home youngest.

“What?” I asked, leaning forward. When a mother is gone for more than a few days — more than a few hours, to be honest — she hopes her loved ones will have missed her wisdom, compassion, kindness, humor, grace, et cetera, et cetera, as much as she has missed their lovely, particular selves.

“You haven’t made it since Henry became vegetarian.”

True that. As it happens, our middle child, Henry, not only turned vegetarian but also developed a keen political and social conscience his first year at college, and brought it all home with him in March, when — well, we all know what happened in March.

The next conversational turn was therefore no surprise. I told Dosi that said dish confused me; that I had in fact mentioned enchilada casserole in this very column back in 2012, but had found it too challenging to write about even back then, in part because my friend Lily had deemed it inauthentic. “I can still hear her aaaargh! as she ran from the kitchen,” I said. “Cultural appropriation and all that. And it would be even harder to write about now.”

“Just put it in context,” said Dosi. “Figure out its history.”

Six hours later, I emerged with enough material to fill Dosi’s head during an hour-long car ride to Fishkill and back — and then some.

What I discovered is that the (known) history of the enchilada is quite remarkable, extending back through the Aztecs to at least 2000 B.C., when the Maya of the Yucatan Peninsula are known to have eaten a precursor of corn tortillas dipped in pumpkin seeds and served with eggs and tomato sauce.

The familiar name “enchilada” is the past participle of the Spanish “enchilar,” which means, basically, “to add chiles to”; the dish’s Nahuatl name, “chillapizzali,” translates to “chile-flute.” Clearly, chiles are essential to the enchilada in all its forms — of which there are at least as many as there are regions in Mexico. Yet the history of this dish is also at times almost unbearably sad, as the history of colonialism typically is.

As we turned off of Route 52, we veered onto the topic of cultural appropriation. Debate still rages over whether or not the term should apply to foods, especially dishes that have evolved and changed for millennia, as cultures merged and ingredients and people traveled the globe. In fact, the particular dish in question is a bastardization of enchiladas Suizas, a creamy, cheesy version created by a Swiss cook in Mexico City in the 1950s.

Dosi shrugged. School’s back in session, offering enough pedantry for any young mind.

Some 80 years ago, author Thomas Wolfe wrote You Can’t Go Home Again. My corollary, born of the past six months, goes like this: You Can’t Stay Home and expect home to stay the same, especially when your kids keep challenging you to reconsider familiar routines and recipes.

Which is why tonight this favorite dish will be served with a new condiment: A piquant dose of historical context.

You can use leftover roast chicken in this dish, or poach about 1½ pounds boneless chicken thighs in chicken broth. When cool, shred chicken; save broth for sauce.


Heat oven to 400 degrees. Spread tomatillos, chiles and onions in a single layer on rimmed baking sheets. Drizzle with the olive oil. Roast 25 to 30 minutes, or until soft and blackening at edges, turning as needed. Let cool slightly. Transfer to a blender along with sour cream, cilantro, garlic, cumin and broth or water; season with salt and pepper, and purée until smooth.

Place shredded chicken in a bowl and toss with 2 cups enchilada sauce.

Heat canola oil in a skillet over medium-high heat. Working in batches, grasp tortillas with tongs and fry until pliable, about 30 seconds per side. Transfer tortillas to a plate and keep covered with a kitchen towel as you work.

Pour about 1 cup enchilada sauce in the bottom of a 9-by-13 inch baking dish. Lay softened tortillas in a single layer over sauce (you will need to tear some of them to fit). Top with a layer of the chicken mixture, then sprinkle with just a little of the cheese. Repeat layering the tortillas, chicken and cheese until you have at least 4 layers. Pour remaining enchilada sauce over top, and cover with remaining cheese.

Reduce oven heat to 375 degrees. Bake enchiladas until sauce is bubbling and cheese is melted on top, about 25 minutes. Allow to cool and set about 10 minutes before serving.