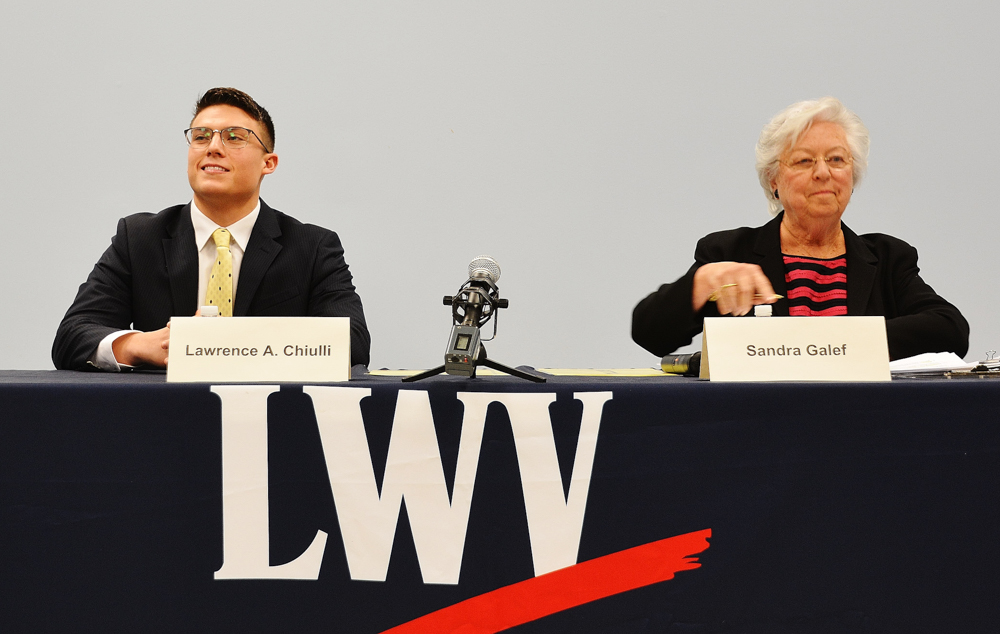 Lawrence Chiulli and Sandy Galef at a forum sponsored by the League of Women Voters in October 2018. (File photo by L.S. Armstrong)

Group has trouble getting incumbents to agree

The League of Women Voters of Putnam County will hold a virtual forum on Oct. 12 with the two candidates seeking to represent the 95th district in the state Assembly, which includes Philipstown.

But it hasn’t had any success with other races in the Highlands.

Sandy Galef, a Democrat who has served 13 terms in the Assembly, is being challenged by Republican Lawrence Chiulli. He was also her opponent in the 2018 election, which she won with 65 percent of the vote.

The forum is being presented in partnership with two League chapters from Westchester County.

[Update, Oct. 7: The League of Women Voters canceled its forum scheduled for Oct. 12 with Galef and Chiulli. It said in a statement that both agreed to participate but that Chiulli did not respond to a request by Oct. 5 to confirm his verbal commitment.]

The three chapters this week canceled a forum for candidates for the U.S. House seat representing District 18, which includes the Highlands. Scheduled for Oct. 14, it would have included incumbent Sean Patrick Maloney, a Democrat, and his two challengers: Chele Farley, a Republican, and Scott Smith, the Serve America Movement (SAM) candidate.

The leagues said in a statement that Maloney this week declined their invitation, and Farley said she would only participate if Maloney were there. The League does not hold forums unless more than one candidate is present. Smith was willing to take part in a two- or three-person forum, it said.

Maloney’s office declined comment. But Maloney, Farley and Smith will debate on Oct. 19 in a forum sponsored by News12 and the USA Today Network, and Maloney and Farley will participate on Oct. 22 in a forum organized by the Dutchess County Regional Chamber of Commerce. Both discussions will be held Via Zoom.

The League of Women Voters of Putnam County also this week canceled a forum scheduled for Oct. 8 for the state Senate seat that represents the Highlands. The incumbent, Sue Serino, a Republican, declined to participate, citing scheduling conflicts. She is being challenged by Democrat Karen Smythe, whom Serino defeated in 2018 by 688 votes of 103,000 cast.

Serino did not respond to an email requesting comment. The senator also declined the League’s invitation in 2016 when running against Terry Gipson and in 2018 when first challenged by Smythe. The candidates will meet in a virtual forum on Oct. 21 sponsored by the Dutchess County Regional Chamber of Commerce. 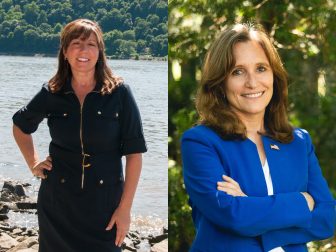 The Putnam League also canceled a forum scheduled for the 94th District of the state Assembly, which includes all of Putnam County except Philipstown and Kent, when incumbent Kevin Byrne, a Republican, declined the invitation and did not respond to the offer of an alternative date, according to Eileen Reilly, president of the chapter. His Democratic challenger is Stephanie Keegan.

[Update: On Thursday, the Byrne campaign issued a statement calling the decision to not hold a forum “regrettable.” It said it had responded to the League invitation and provided four alternative dates but that it did not hear back.]

Reilly said League members were frustrated by the lack of participation.

“This year, because of COVID-19, we co-hosted the forums with Leagues in Westchester and Rockland,” she said. “We had 43 candidates and 13 forums scheduled, and out of that, we managed to schedule five. We were looking to see if there was a pattern — in the past it was one specific party — but for our group in Putnam this year it was the incumbents” who declined to participate.

“We schedule the forums because we feel it is important for people to know who they are voting for, but the candidates don’t feel the same way,” Reilly said. “We’re disappointed.”

In a statement, the three League chapters said, “We view the forum as if it were a job interview, so it is troubling that any candidate would not want to take this opportunity to communicate with the people they are seeking to represent.” They asked residents “to communicate with these candidates via social media and email to express their desire for full participation in future League forums.”

The Putnam chapter had trouble in October 2019 attracting some candidates even to a local forum. A challenger for the Philipstown Town Board, Corey Lyons, declined to participate, as did Tina Merando, the incumbent town clerk, and Joseph Spofford, the Republican candidate for Putnam County judge. Lyons and Merando lost the election, while Spofford was elected.

Founded in Chicago in 1920 six months before the ratification of the 19th Amendment, which gave women the right to vote, the League of Women Voters promotes voting with initiatives such as its site Vote411.org. While its election work is presented as nonpartisan, the national organization also lobbies elected officials on “affordable, quality health care, including birth control and the privacy to make reproductive choices,” environmental issues and immigration policy.