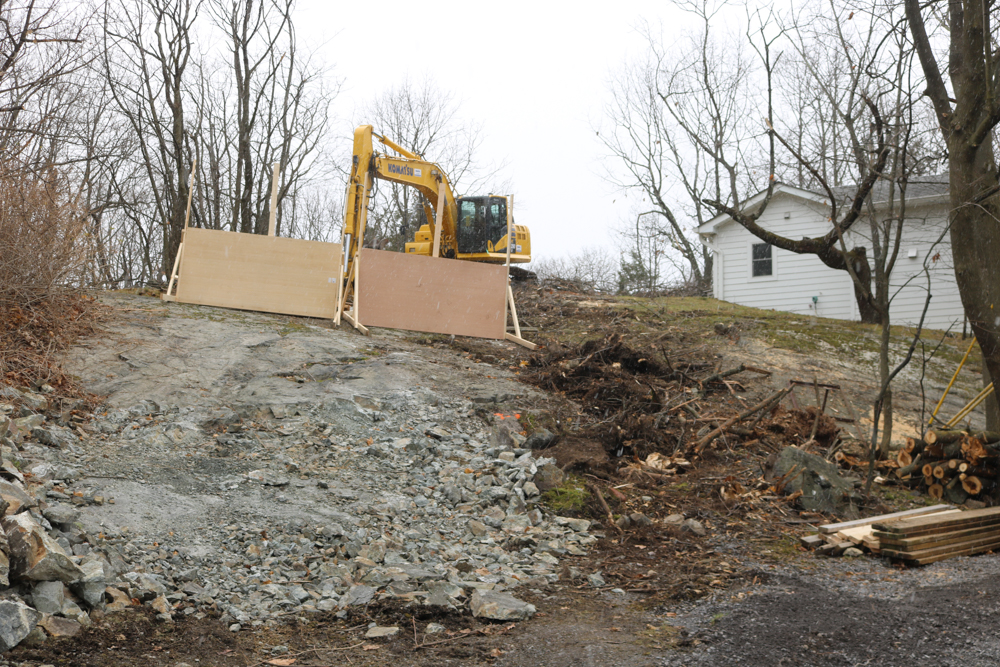 The village issued a stop-work order on a driveway being constructed on Rock Street. (Photo by M. Turton)

An excavation at 29-31 Rock St. in Cold Spring that was halted last week by a stop-work order will be addressed on Dec. 23 at a public hearing.

The project, which was discussed at length at the Tuesday (Dec. 8) meeting of the Village Board, was referred on Dec. 2 to the Historic District Review Board by Charlotte Mountain, the village code enforcement officer. Neighbors claimed the application for excavating should have been approved by the HDRB and the Planning Board before the permit was issued.

Mountain approved a permit last month for the property owner, William McComish, to extend the driveway and parking at the site, which has a steep rock outcrop.

In a document submitted to the village on Tuesday, eight residents who live near the site described McComish’s application as “an end run around Cold Spring law to begin a construction project that involves massive environmental impact and potentially multiple structures.”

Last year, McComish withdrew a request to the ZBA for a variance to construct a third residence on the property.

McComish said on Wednesday that he does not intend to build another house. “I’m getting older; I’m 75,” he said. “I simply want access to the top of my property, without having to go over slippery rock.”

At the Village Board meeting on Tuesday, Planning Board Chair Matt Francisco said that because McComish’s application to extend the driveway was not a change of use, it did not require review by that board.

However, the property is within Cold Spring’s historic district, and among the criteria the HDRB considers is the effect a project may have on natural resources, including geological features such as rock outcroppings.

Sean Conway, the vice chair of the Historic District Review Board, wrote in an email on Thursday that his panel will decide after the public hearing whether to approve a “certificate of appropriateness” for the Rock Street project. The code enforcement officer would then determine whether the stop-work order can be removed, he said.

At the Village Board meeting, residents objecting to the project also complained that the work site lacked barriers to prevent debris from hitting homes and cars. One neighbor, Trevor McCarthy, who lives around the corner from the site, said he found granite on his porch and near his car.

“We take your safety concerns seriously,” Mayor Dave Merandy said. “The flying debris should have been screened better, and if we were tardy in addressing that, I apologize.”

Merandy also noted that had a “steep slopes” provision being considered as part of the update of the village code been in effect, it might have prevented the Rock Street excavation. “But we have to follow the existing code,” he said.

When asked what recourse residents objecting to the project might have if the code enforcement officer erred in issuing the permit, Merandy responded, “That is a question for our attorney.

“We’ll see where the HDRB goes,” he said. “There will be some legal squabbling.”

The board approved annual appointments for 2021. While most remained the same, new appointments include incoming Trustee Kathleen Foley as representative to the Cold Spring Fire Co.; incoming Trustee Heidi Bender to the Audit and Insurance/Risk Management committees; and Eric Wirth to chair the Zoning Board of Appeals.

Citing traffic and safety concerns, the board declined a request from village resident Natella Alhoca to set up a food truck at Main and Chestnut streets.

The village reservoirs are at 97 percent capacity, a 10 percent increase over this time last year.

Dec. 13: An earlier version of this story stated that the Zoning Board of Appeals had denied an application for the construction of a third home on the property. However, according to the then-ZBA chair (below), the application was withdrawn. This has been corrected in the story.