Vaccinations increase but some still have doubts

For four days last week after the state opened a mass-vaccination site at SUNY Orange’s cavernous gymnasium in Middletown, about a 40-minute drive from the Highlands, appointments could still be had.

A clinic scheduled for Thursday (March 25) at the Philipstown Recreation Center with 1,000 slots showed availability for about 12 hours, from Tuesday afternoon until Wednesday morning, rather than for 12 minutes.

The availability of appointments, even with expanded eligibility — the state this week opened vaccines for any resident age 50 or older, regardless of medical conditions — is a sign that the shortages that ignited frustration and anger during the first three months of the national rollout may be waning.

But another hurdle looms: reaching a vaccination rate of 75 percent, the “herd immunity” threshold when scientists believe COVID-19 will run out of humans to easily infect.

Based on polls from Marist College’s Institute for Public Opinion and the Pew Research Center, a growing share of people, including Blacks and Latinos, say they are willing to be vaccinated, but the race to herd immunity will depend on convincing the sizable number of people who say they will not.

About 30 percent of a sample of 1,227 adults surveyed by Marist over five days in early March said they do not plan to be vaccinated. That included four in 10 people who said they were Republicans and high percentages of Latinos, independent voters and younger and middle-aged adults. 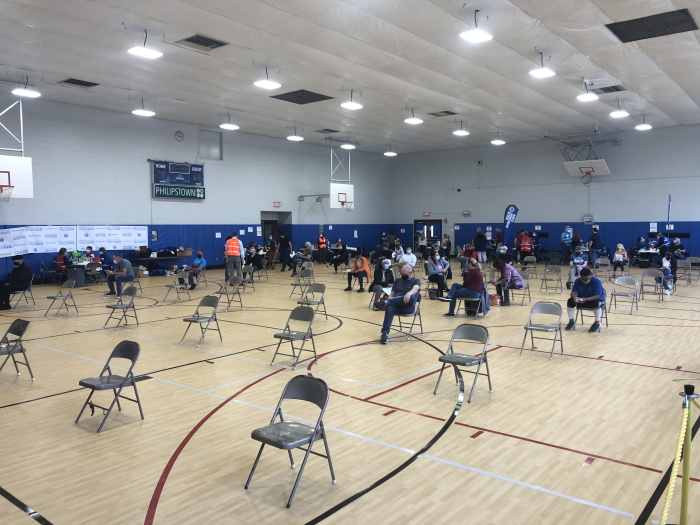 Residents were asked to wait at the Philipstown Recreation Center for 15 minutes on Thursday (March 26) after receiving their vaccines.

According to the Pew poll, which was based on the responses in February of more than 10,000 adults, the reasons for declining the vaccine included the fear of side effects; the relative speed at which the vaccines were developed and tested; and a general mistrust of the medical system.

Others said they distrusted vaccinations in general, and many of the people surveyed did not believe they needed to be vaccinated. Pew Research found the same partisan gap as the Marist poll.

For Millie Solomon, president of the Hastings Center, a bioethics think tank based in Garrison, the U.S. is in a race against the more-contagious mutations of the coronavirus first detected in Brazil, South Africa and the U.K.

Widespread vaccine resistance is a sign that “we’ve lost our sense of responsibility for each other,” said Solomon. She noted some people have told her they do not need the vaccine because they are young and less likely to come down with serious symptoms, or because they have already had COVID-19.

“We focus so much on individual rights that we are forgetting about care and concern for others,” she said. “People are waving a liberty flag, but there’s not much freedom in being terribly sick.”

States are receiving weekly allotments of three vaccines. Dutchess County Executive Marc Molinaro said the county “is not at a point yet where we’re digging deep into communities to either convince or encourage.” But at some point, he said, “that will shift,” and the question will become whether enough people have been vaccinated.

Along with the poll results, state data highlights problem areas. 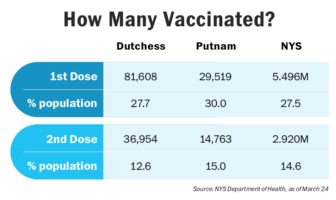 A Kaiser Family Foundation poll from February found that 14 percent of health care workers nationally said they were not planning to be vaccinated, and 9 percent said they would only get inoculated if it was mandated.

Nuvance Health, whose system includes Putnam Hospital Center in Carmel and Vassar Brothers Medical Center in Poughkeepsie, is “continuing to encourage our teams to get vaccinated to reduce the spread of infection and protect themselves, patients, peers and the communities we serve,” said a representative, Marina Ballantine.

As part of Dutchess’ advocacy, Molinaro and other county officials have been holding “town halls” at various organizations, including churches. The county also created a “vaccine equity coalition” whose members will focus on “hard-to-reach populations and dispel myths about the vaccine,” according to the county.

Referencing the partisan divide, Molinaro said that people who are ideologically conservative tend to mistrust government and are likelier to be influenced by friends, family and their pastors.

Shaming people and telling them they are wrong is not the right approach, he said. Instead, “meet people where they are and try to provide them the information they need to conclude the right choice for them,” he said. “I think they will conclude that being vaccinated is in their benefit and in the benefit of others.”

2 thoughts on “The Race to Herd Immunity”