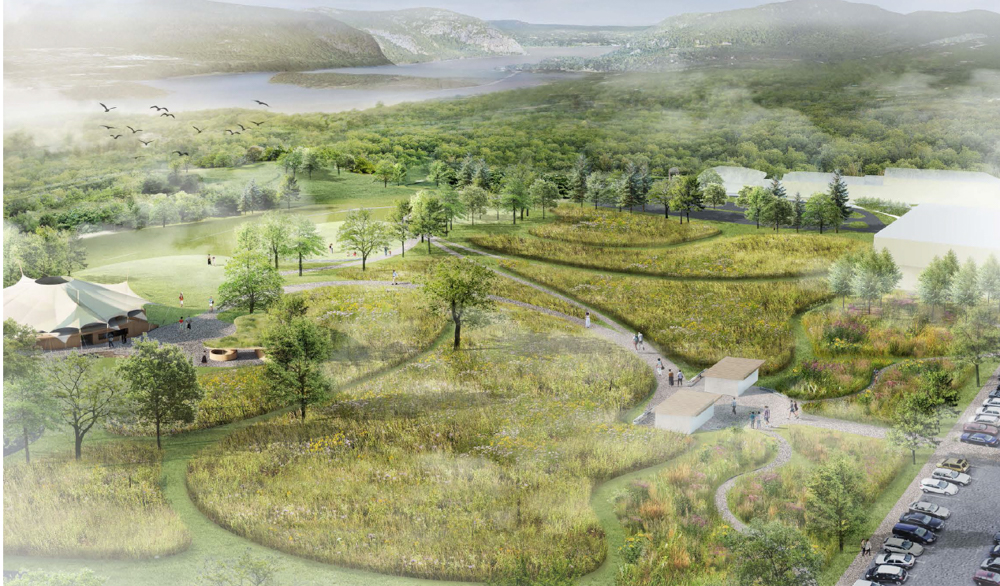 The Hudson Valley Shakespeare Festival is hoping in 2022 to move from its location at Boscobel to land that was part of The Garrison golf course.

The Hudson Valley Shakespeare Festival would like to move in 2022 from its seasonal home at Boscobel on Route 9D to land donated by Chris Davis at The Garrison golf course on Route 9, which overlooks the Hudson River.

To accomplish this, the HVSF has assembled a team of specialists to create a master plan, including landscape architects, a civil engineer, a legal firm, a traffic engineer, an environmental planner and an acoustics expert.

The plan has been submitted to the Philipstown Planning Board, whose seven members at their monthly meetings are reviewing a state-mandated environmental assessment form (EAF). The Planning Board also would approve the site plan, although the Town Board must first agree to change the zoning for the property, which lies in a larger rural conservation district and a planned development district specific to the golf course.

“It is a complicated application,” said Neal Zuckerman, who chairs the Planning Board, on Wednesday (April 7). “I suspect it’s the largest project proposed in Philipstown in quite some time.” 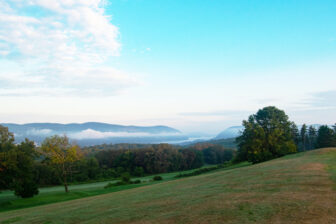 A view from the proposed HVSF site (Photo provided)

For 2021, HVSF will perform under its tent at Boscobel, its last of 32 seasons through 2019, before the 2020 performances were canceled because of pandemic restrictions. If the project is approved, HVSF hopes to move its Boscobel tent to the site at Route 9 and Snake Hill Road for 2022 performances.

With permits in hand, in May 2022 it would install its temporary tent; repair the entry roads; upgrade the parking lots; add lighting; repurpose the golf pro shop and golf cart barn; build a service road to the performance space; and install basic landscaping.

With further approvals, in 2023 and 2024 it would construct a permanent tent with slightly fewer seats than the Boscobel tent, which has 535; a 1,200-square-foot box office and welcome center; and a 4,000-square-foot “back of house” building with dressing rooms for the actors.

HVSF plans, starting in June, to present two plays at Boscobel, The Tempest and The Most Spectacularly Lamentable Trial of Miz Martha Washington, by James Ijames. Tickets have not gone on sale but initially will be limited under state guidelines to 25 percent of the house, or about 130 seats. That could mean that shows quickly sell out. For HVSF to offer more, the state would need to relax social-distancing restrictions.

In later phases, which HSVF says “could be many years or decades away” (the environmental assessment form gives a construction window of 2022 to 2031), the festival proposes constructing an indoor theater with 225 seats; a rehearsal space; a 2,400-square-foot pavilion; a 2,500-square-foot building with concessions and restrooms; and 26 two-bedroom cabins for the seasonal performers. In recent seasons, performers have lived for the summer in hotels in Fishkill.

Philipstown in 2005 approved a 40-room hotel and spa for The Garrison site, but it was never built. HVSF said it would like eventually to receive approval for 14 additional rooms to expand The Garrison inn from 8 to 20 rooms and build the performer cabins.

At its January meeting, a Planning Board member asked HVSF for clarification about site capacity. HVSF said that if everything were operating simultaneously at full capacity — including a performance, a wedding banquet and a packed restaurant and hotel — there would be about 1,100 guests and staff and 400 cars.

But, it noted, event management would avoid that scenario. It said it expected only about five summer nights a year to be exceptionally busy, and activity for rest of the time to be about half-capacity. “We believe that it is economically and environmentally unsustainable to provide extra capacity for a level of activity that is only present on the site a few times each year,” HVSF said in a written response. 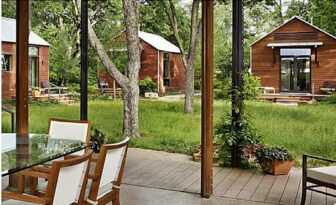 The HVSF has proposed seasonal cabins for the property that would serve as housing for performers. (Image provided)

Another board member expressed concern that HVSF’s calculations that each car would carry an average of 2.79 occupants were too generous. The festival responded that Philipstown code requires one parking space for every three seats at a restaurant or place of public assembly, so that 12 seated guests and one employee would require four spaces, or 3.25 people per vehicle. It said it relied on calculations from the Federal Highway Administration, which suggested a range of 2.2 to 2.8 occupants for restaurants, banquets and events.

The Planning Board will continue its review of the environmental impact report at its meeting scheduled for Thursday (April 15) via Zoom. For a link to attend, email [email protected]

We asked Davis McCallum, the artistic director of the HVSF, to share the most common questions he’s been asked about the project and his responses.

What about the traffic?

I’ve been having a lot of detailed conversations about this. Obviously we share peoples’ concern, in particular about the dangerous intersection at Route 9, Snake Hill and Travis Corners. We are starting a conversation with DOT [the state Department of Transportation] about a traffic intervention of some kind, most likely a signal, and I hope that’s something the community will embrace.

Will the tent interrupt the ridgeline?

I’ve heard people say the tent will be positioned at the crown of the ridge, which is not true. It will be halfway down the slope of the 11th fairway. The high land is at the 11th tee. The property is in a cup with higher ridgelines around it on three sides, and that’s why it’s not designated as a scenic ridgeline. If you go over to Route 9W [in Orange County], as I did on Easter Sunday, and look back, you’ll see the golf course, because 80 acres of trees were clear-cut to create it in 1960. But you also see that it’s halfway up the topography. You should not imagine the current tent because we engaged an extraordinary architect to design a structure that will be nested into the grade of the land. The tent topper will be visible and the rest kind of set into the ground. It’s not going to be invisible, but it’s going to be beautiful.

Is it just too big, or too much? Is it going to become another Breakneck?

We’re not advertising this as a hiking destination. It’s privately owned land, not a public park. That said, we’re trying to maintain access so that you don’t have to be a ticket-holder to enjoy the view. Our plan is to maintain the access that community members have long enjoyed to walk their dogs, go snowshoeing, come for a jog, etc. It’s at our discretion to operate the site in such a way that prevents overuse, so we’re not going to be saying, “Hey everybody, come have a picnic.” What I have been surprised by is the characterization of our local arts organization as “the developer,” because I don’t think that reflects our intentions or the project. I don’t think it’s fair to compare it to Butterfield or where outsiders have said, “We have a big plan.” We’re proposing moving an arts organization that has been on Route 9D for 33 years to Route 9.

What happens if HVSF closes?

Chris Davis is putting into his offer of the land a reversion clause so that the land cannot be further subdivided or developed for unrelated commercial or residential use. If HVSF ever ceased to exist, the land would go to a conservation organization such as Scenic Hudson or the Hudson Highlands Land Trust.

Below are a series of maps prepared by HVSF showing its plans. A Jan. 28 presentation by HVSF can also be downloaded as a PDF.

2 thoughts on “Shakespeare Plans: An Update”