Officers responded to 663 calls, including 24 auto crashes and 14 domestic disputes.

A South Chestnut Street caller reported that accounts had been fraudulently opened in her name. 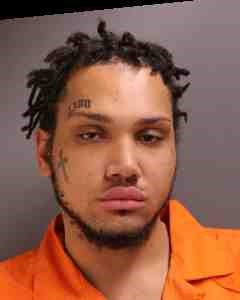 Officers responded at 5:25 a.m. to a call at 426 Main St. for a robbery involving a firearm. The officers interviewed two men, one of whom they said was in possession of narcotics and a semi-automatic “ghost gun” that had been assembled from a kit, with no serial number. Police identified the suspect as Dillon M. Brown, 23, of Plattekill, New York. He was charged with felony robbery, felony possession of a weapon, felony possession of a controlled substance and a misdemeanor count of criminal possession of a controlled substance. Police said that while in a holding cell, Brown obstructed the toilet with clothing and was subsequently charged with a misdemeanor count of criminal tampering. He was arraigned and transported to the Dutchess County Jail on $5,000 cash / $20,000 bond or $50,000 unsecured and given a return court date.

Officers responded to East Main Street after a call that a man had been assaulted.

A South Avenue caller reported that items were missing from his home.

A South Brett Street caller reported that she was a victim of a telephone scam.

A Deerfield Place caller reported that someone had fraudulently filed for unemployment benefits under her name.

John R. Gonzalez, 27, of Beacon was charged after an auto crash with possession of a controlled substance, driving while impaired, second-degree obstruction of government administration, refusal to take a breath test and criminal mischief.

Officers responded to Railroad Drive to assist with a disorderly man on a Metro-North train.

Officers responded to Fishkill Avenue after a car hit a telephone pole.

A Verplanck Avenue caller reported being the victim of an unemployment benefits scam.

A Dutchess Terrace caller reported that a man who asked her for directions had exposed himself.

A Colonial Road caller reported being the victim of insurance fraud.

Zakiyah N. Maynard, 40, of Beacon, was charged with criminal contempt for allegedly violating an order of protection.

Jenilee Dupont, 38, of Poughkeepsie was processed on an open bench warrant.

Tyler J. Acuti, 21, of Wappingers Falls, was charged after an auto crash on Main Street with driving while impaired and obstruction of government administration.

A Catherine Street caller reported harassment from another individual.

A caller reported a Main Street establishment for not enforcing pandemic capacity and social-distancing guidelines.

Joseph J. Goodwin, 57, of Jersey City, New Jersey, was charged after an incident on Main Street with second-degree criminal impersonation and second-degree possession of a forged instrument.

A Fishkill Landing caller reported that someone had fraudulently filed for unemployment benefits under her name.

A Monell Place caller reported that someone had fraudulently filed vehicle insurance and an unemployment claim in her name.

A Mountain Lane caller reported damage to her mail box.

A Green Street caller reported suspicious items left by a former tenant in his basement.

A Schenck Avenue caller reported damage to his vehicle as a result of a hit-and-run.

Officers responded to an auto crash on Washington Avenue and issued tickets.

Christian Chavez, 35, of Newburgh, was processed on an arrest warrant.

A caller reported damage to his car as a result of a hit-and-run on Main Street.

A Tompkins Terrace caller reported being assaulted while delivering food.

Tyrone Parker, 39, was arrested on an outstanding warrant and charged with burglary, criminal contempt and criminal mischief.

Ryan Manzi, 28, of Beacon, was charged with criminal contempt and harassment after allegedly violating an order of protection.

A Van Nydeck Avenue caller reported an individual harassing people with a bullhorn. A suspect was located and interviewed.

A Church Street caller reported missing items and damage to his vehicle as the result of a burglary.

A Verplanck Avenue caller reported being bit by a loose dog. The dog warden was notified.