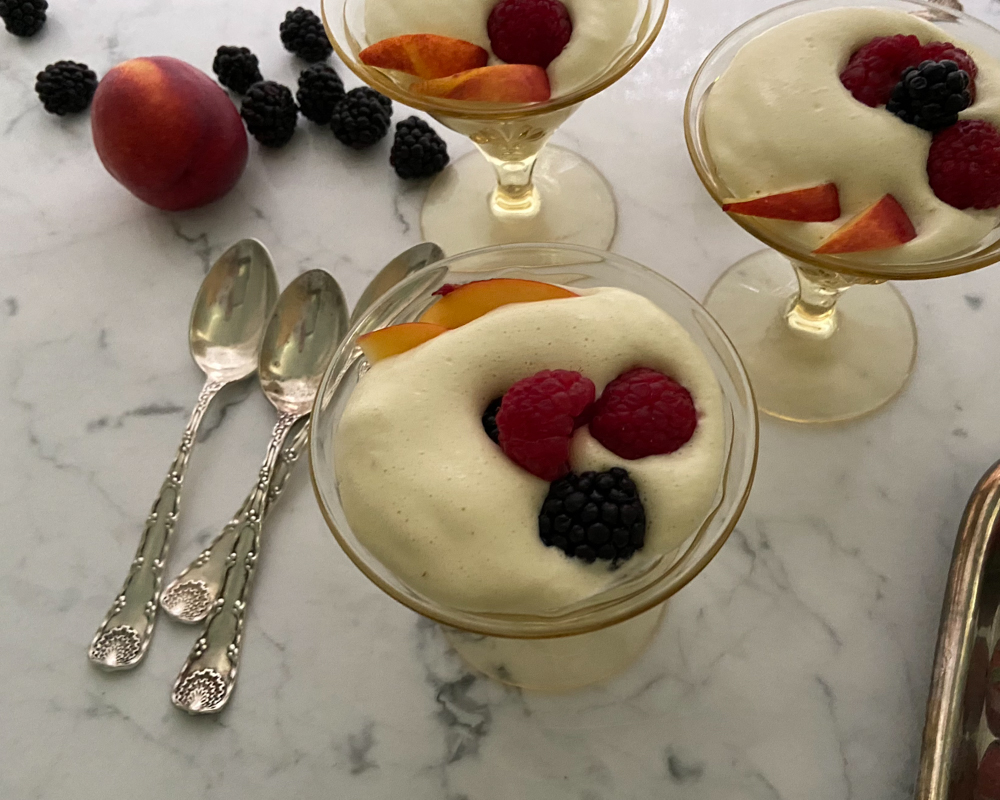 We all have a few useless gifts — talents in which we might take secret pride but that hold no sway with teachers, bosses, clients and the like.

Among mine is the fairly unremarkable ability to remember exactly when and where I first ate something. That’s why it troubles me that I have zero recollection of my first encounter with sabayon.

All I can say for certain is that one cozy evening at the end of a dinner party several years ago, I decided to make it. To my knowledge, both the inspiration for this sabayon and the ability to execute it came out of nowhere. In all likelihood, I’d tasted it at some French bistro back when I lived in Manhattan, and had surely chanced upon zabaglione, its Italian nonna, at neighborhood trattorias. It did not make a strong impression.

The story my memory presents goes like this: I spent many eons in sabayon-free darkness. And then, bang, I found myself standing at the stove one night whipping the frothy egg-yolk-and-booze custard into a pale-gold glory.

Sabayon’s subsequent ascendance to superstar status in my life was bolstered by the enthusiasm of one of our dinner guests that evening, a woman who adored it with such extravagance, and who enthused about it for so long afterward, that I feared my serendipitous little custard had done harm to her stability.

But sabayon deserves a place in anyone’s dessert pantheon on its own merits. Addictive and versatile, it pairs wonderfully with cold-weather treats such as poached dried fruits and nutty cakes and biscuits. But it really shines in summer, as a way to showcase the season’s delectable stone fruits and berries.

In truth, a little murky darkness also spilled over into the years following sabayon’s appearance in my life. For starters, I had to grapple with its messy nomenclature. Preliminary research had led me to believe that “sabayon” and “zabaglione” were simply French and Italian names, respectively, for the same thing. They’re pronounced the same (albeit with different accents if you have a talent, useless or not, for accents).

Furthermore, I’d heard that the spat over which country invented it first was simply another iteration of the silly rivalry between Europe’s two historic culinary giants.

Not so. According to The Joy of Cooking, Italian zabaglione, “the mother of the sabayon sauce family,” is a specific dish that can only ever be made with Marsala, and is only ever served warm. Sabayon, meanwhile, can refer to a whole host of variations and offshoots. It can be made with any sweet dessert wine, such as muscat or Baume de Venise, or with liqueurs such as St. Germain or Grand Marnier. It can include a blend of Champagne and brandy, or rum or whiskey; it can feature tequila and lime juice, or even just plain coffee if you like your desserts alcohol-free. Sabayon can be savory as well as sweet. And you can mix cool whipped cream into sabayon — never into zabaglione — and serve it chilled.

To my great dismay, my latest research also revealed that both sabayon and zabaglione are difficult to make. I had no idea. I thought they were just fun. Sure, they require vigorous whipping and some patience — talents that I happen to possess. But I did not realize they were daunting.

Now that I know, however, I will get busy worrying about whether I will ever be able to make a satisfactory sabayon again. Because one of my greatest unsung talents is coming up with new reasons to fret over perfectly fine, old things.

Experts recommend using an instant-read thermometer to ensure your custard has reached a safe 150 to 160 degrees before you take it off the heat, but I find it nearly impossible to simultaneously whip the custard and take its temperature. I keep this in mind: 150-degree water is hot enough to cause a third-degree burn after 2 seconds of immersion; it’s quite hot, in other words.

If using whipped cream, fill a sink or basin with 4 to 5 inches of cold water.

In a large, heatproof bowl, combine the egg yolks, superfine sugar and salt and whisk vigorously until thickened and pale yellow, or about 4 minutes.

Bring a large pot of water to a simmer then reduce the heat (it should maintain a steady simmer without boiling). Rest the bowl over the water so that it is suspended above it, rather than immersed in it. Whisking continuously, slowly and gradually add the liquid to the egg mixture. Continue whisking over gentle heat, rotating the bowl as it gets hot, until the mixture becomes light, fluffy and stable, about 15 minutes. Serve warm immediately, or transfer to the sink filled with cold water to stop the cooking. When cool, fold in the whipped cream. Serve topped with fruit.

*You can DIY superfine sugar by whirring granulated sugar in a blender for 1 to 2 seconds; don’t blend too long or it will turn to powder.

Choose a liquid that complements your fruit, such as Calvados to go with an apple dish, kirsch for cherries or rum with roasted pineapple. If you want the flavor of liqueur or liquor with less alcohol, simmer it before combining it with the egg-yolk mixture (be sure to re-measure the volume after simmering).