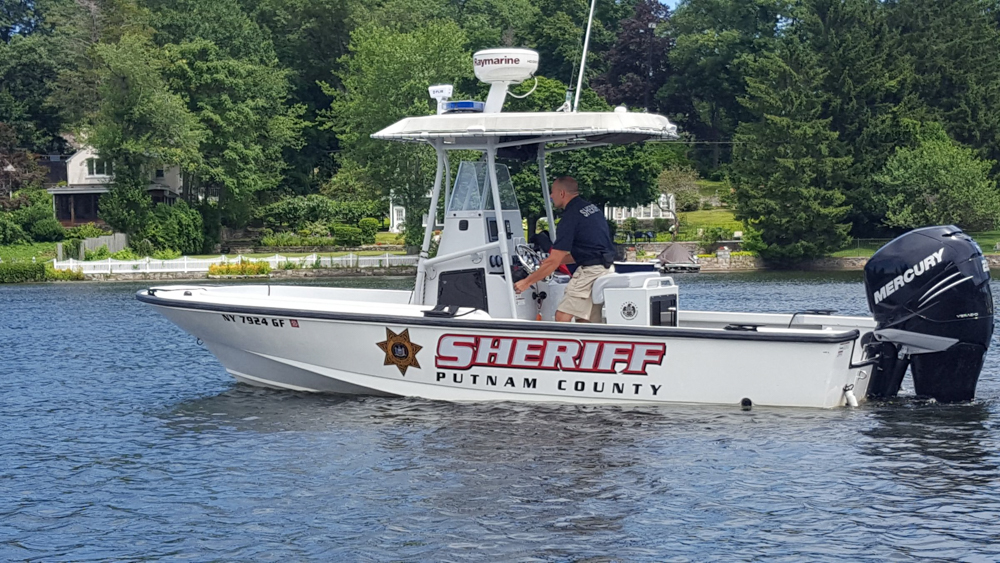 The Putnam County sheriff’s patrol boats include two provided at no charge by the state. (Photo provided)

As high summer looms, Putnam’s scuttling of Sheriff’s Department boat patrols on the Hudson River has sparked new friction in Carmel and an appeal to its neighbors to help with the situation created by the county’s retreat to dry land.

The fracas stems from the decision last fall by Putnam County Executive MaryEllen Odell and the Putnam Legislature to remove $45,000 from the 2021 budget to fund patrols on the river and Lake Mahopac.

Odell has justified the move as a way to save money, promote shared services and eliminate redundancies because other agencies patrol the Hudson, including the U.S. Coast Guard, New York State Police, state parks office, state Department of Environmental Conservation and volunteer fire departments, as she said on June 17.

Later that day, the issue provoked intense debate during a meeting of the Putnam Legislature’s Protective Services Committee, held by audio connection.

During the session, Capt. Harry Tompkins, who leads the Sheriff’s Department’s patrol division, accused Legislator Ginny Nacerino of Patterson, who chairs the committee, and Legislator Neal Sullivan of Carmel-Mahopac of “spewing” misinformation about the marine patrols. Nacerino angrily “took offense” while Sullivan interrupted Tompkins, termed the exchange “a waste of time,” and demanded that the committee meeting end — so it did.

In a statement released on Wednesday (June 23), Sheriff Robert Langley Jr. described some of Nacerino and Sullivan’s comments as “disturbing,” including their proposal that Marine Unit resources be redirected to drug investigations and mental health programs.

Redirecting money that way “is the exact definition of defunding the police,” Langley asserted. More support for anti-addiction and mental health aid is crucial, he said, but “reducing the Sheriff’s Department budget at the expense of public safety is not the correct mechanism to address these social issues.”

Langley also challenged the idea that other jurisdictions would fill in for Putnam on the river. “The Sheriff’s Department not only has the jurisdictional authority but the obligation to provide emergency and law enforcement services throughout all of Putnam County,” including waterways, he said. While other agencies have marine units, “they are not dedicated to Putnam County and there is no overlap of services.”

The sheriff observed that the department’s Marine Unit was established 23 years ago; uses two boats provided at no charge by New York State, including one docked in Cold Spring; and is funded by overtime pay, although the state reimburses half of that expense.

The unit has operated on the river and Lake Mahopac, as well as Lake Oscawana. The policy change by Odell and the Legislature limits patrols to Lake Oscawana, with a county-owned boat.

The return of the two boats to the state “absolutely has an effect on public safety on the waterways of Putnam County,” Langley said.

Over the last several weeks, in memos, Odell has defended her position. On June 11, she directed Chris Fallon, director of the Marine Services Bureau of the state parks department, to work with the deputy county executive, Thomas Feighery, to retrieve the state vessels from Putnam. But Fallon had earlier informed Odell that he would coordinate the boats’ return with the Sheriff’s Department.

Five days later, Odell ordered Langley to relinquish the boat keys to “my staff” so they (not Langley) could present them to the state soon, perhaps on July 1. She described the boats as “clearly surplus and unnecessary” and said the state can offer them “to another agency with the need for same.”

Legislator Nancy Montgomery, who represents Philipstown, wrote to Odell on June 17 criticizing efforts “to defund the Marine Patrol Unit.” The same day, Odell appealed to the county executives of Dutchess, Orange, Rockland and Westchester to “continue a conversation” about “mutual aid arrangements” on “marine unit emergency responses in the Hudson along the shores of Putnam County.”

Langley expressed doubts about the efficacy of the request. “Without the Sheriff Department’s marine patrol vessels, what police agency will respond to emergency calls on the Hudson River in Putnam County?” he asked on Wednesday.

Odell, Nacerino and Sullivan maintain that the decision to stop the river patrols was laid out when the county prepared the 2021 budget last fall.

According to Langley, though, “this cut was made unilaterally” and “without any constructive dialogue” with the Sheriff’s Department.

In April, the county proposed selling the patrol boats while Tompkins revealed that the Sheriff’s Department had scraped together enough reserve funds to continue the river patrols.

Nacerino said on June 17 that the Sheriff’s Department served “as a support services agency, not a primary agency” on the river and that “the decision to cease patrols in no way jeopardizes the safety and welfare of those out on the waterway.”

She added that “our intent was distinctly conveyed to the Sheriff’s Department. We had hoped they would have acted in good faith. The Legislature was blatantly defied.”

Before his call to shut down the meeting, Sullivan disparaged the Sheriff’s Department actions as “unprofessional.” He said agencies involved on the river include one “right in the Village of Cold Spring,” which he only learned of recently: “We were never told the Cold Spring Fire Co. has a marine unit and boat in the Hudson for safety activities,” he said. “All we kept hearing was how we’re defunding the police and leaving people without service.” He noted that the Garrison Volunteer Fire Co. also has a boat.

Tompkins on June 17 accused Nacerino and Sullivan of “spewing things out that you’re calling facts. And you’re the ones who are actually being unprofessional.”

Nacerino replied, “I take offense. We feel very confident and secure in our decision and do not feel in any shape or form that the health, safety and welfare of any residents is being jeopardized.” She likewise rejected the term “defunding the police. It’s reallocating resources,” she said.

Like Tompkins, Montgomery observed that Philipstown’s fire departments consist of volunteers. “We can’t guarantee that we’re going to have the manpower to respond to calls on the Hudson with volunteers from Garrison and Cold Spring,” she advised the committee. The memo she sent to Odell that day also said that “when the Cold Spring and Garrison fire boats are dispatched on the Hudson River, the sheriff’s Marine Unit is also dispatched as part of the Putnam County Mutual Aid Protocol.”

Montgomery argued that Putnam should have obtained written agreements with other counties and governments on river patrols before ending the Sheriff’s Department role. “You say that you know it’s all covered,” she told Nacerino. “Show me the facts, the details. Have we asked” other agencies about filling in?

In a May 19 letter to Odell, Fallon, from state parks, said deployment of the two state boats is “one of the primary methods” New York uses to “provide safe and enjoyable recreational opportunities for boaters. To that end, it is unfortunate that these boats would not be needed” in Putnam any longer.

Before his office reassigns the boats, “I ask the county to reconsider,” he wrote.

Odell replied that he should come and get the boats.

Dan Keefe, a state parks spokesperson, said Wednesday that “vessels are periodically reassigned as local governments decide to expand or reduce law enforcement coverage” and that the state remains available to assist Putnam” with patrols in the future.

6 thoughts on “Sheriff Criticizes End of Patrols on Hudson River”