For the second summer in a row, a rare virus that is fatal to white-tailed deer has been detected in the Hudson Valley.

The state Department of Environmental Conservation confirmed this week that Epizootic Hemorrhagic Disease (EHD), which had been found in Ulster County, has spread to Rhinebeck, in Dutchess County. The disease is not transferable to humans, pets or livestock.

Once a deer is infected with the disease, it typically dies within 36 hours. Symptoms include disorientation, losing the fear of humans, swollen necks and tongues, and unquenchable thirst, which is why many dead deer are found in and near water sources.

Because of their elevated body temperature and weakened blood vessels, deer that succumb to EHD decompose quickly, leading to rapid meat spoilage. Disoriented deer may also be more likely to wander into the road, so motorists should use caution. (To report a sick or dead deer, call the DEC at 845-256-3098.) 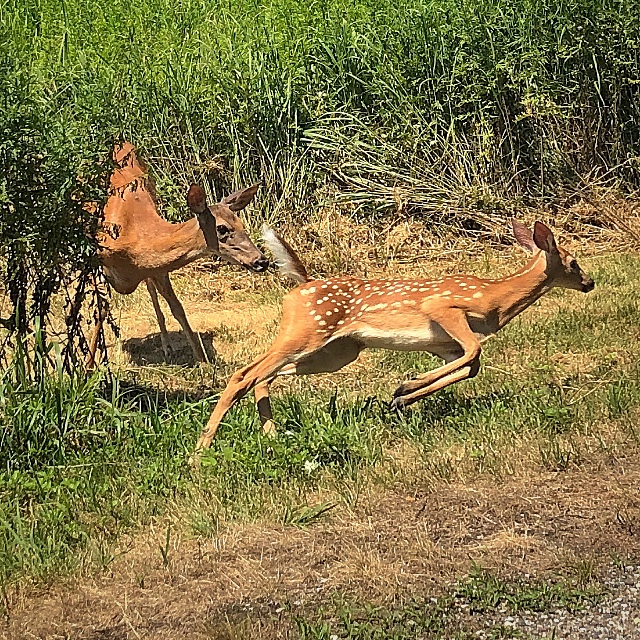 White-tailed deer spotted in Beacon (Photo by B. Cronin)

The virus is spread by midges, small biting insects colloquially referred to as gnats or “no-see-ums.” The disease is common in the South, but decades of exposure there has led to milder outbreaks and lower mortality rates.

EHD outbreaks do not have a significant long-term impact on deer populations, but mortality can be high in small geographic areas, as was the case last year in Putnam County. The DEC estimates that the 2020 outbreak killed at least 1,500 deer in the Hudson Valley, with enough in Putnam County to prompt the agency to lower the number of 2021 permits it issued in the Highlands to hunters of antlerless deer.

It’s only the fourth time that EHD has been seen in the Hudson Valley. Previous outbreaks occurred in 2007 in Albany, Rensselaer and Niagara counties, in 2011 in Rockland County and last year in Orange, Dutchess and Putnam. There is no known cure or effective management plan besides waiting for the first hard frost to kill off the midges, which usually occurs around mid-October.

The leading hypothesis as to how the infected mites reach New York is via the remnants of tropical storms and hurricanes that have traveled through the South. The 2011 outbreak occurred shortly after Tropical Storm Harvey, last year’s outbreak came just after Isaias, and this year’s outbreak arrived after Elsa. That could forebode more frequent outbreaks as global warming disrupts weather patterns and produces stronger storms.

One thought on “Deadly Deer Disease Returns to Hudson Valley”