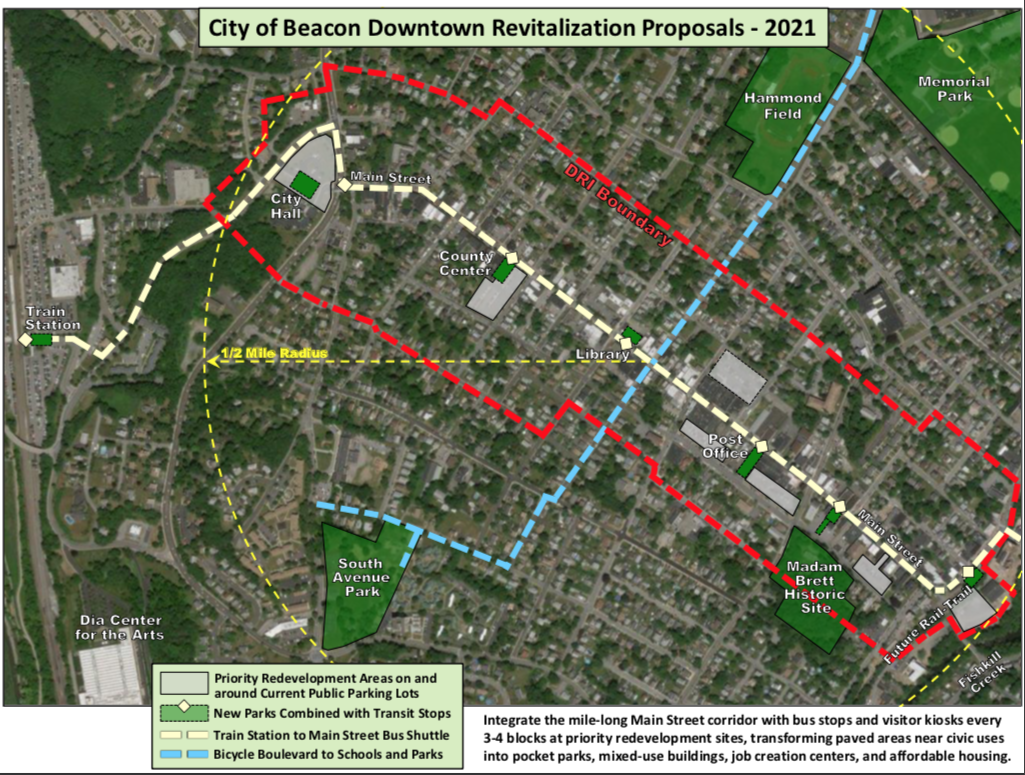 New parks and bike routes are some of the projects being proposed.

City will apply for $10 million in funding

Beacon’s application for a $10 million state grant will illustrate how the city could transform 9 acres of parking lots and other city-owned land into mixed-used developments promoting green infrastructure, affordable housing and economic development.

But, as City Council members stressed during their Monday (Aug. 30) meeting, the plans will be subject to a lengthy public planning process regardless of whether Beacon is selected for a Downtown Revitalization Initiative grant.

The grant program, which began in 2016, is designed to “transform downtown neighborhoods into vibrant centers,” according to the state, through awards of $10 million or $20 million. One or two municipalities are nominated by the economic development councils in each of 10 regions; the four previous winners from the seven-county Mid-Hudson region were Middletown, Kingston, New Rochelle and Peekskill. 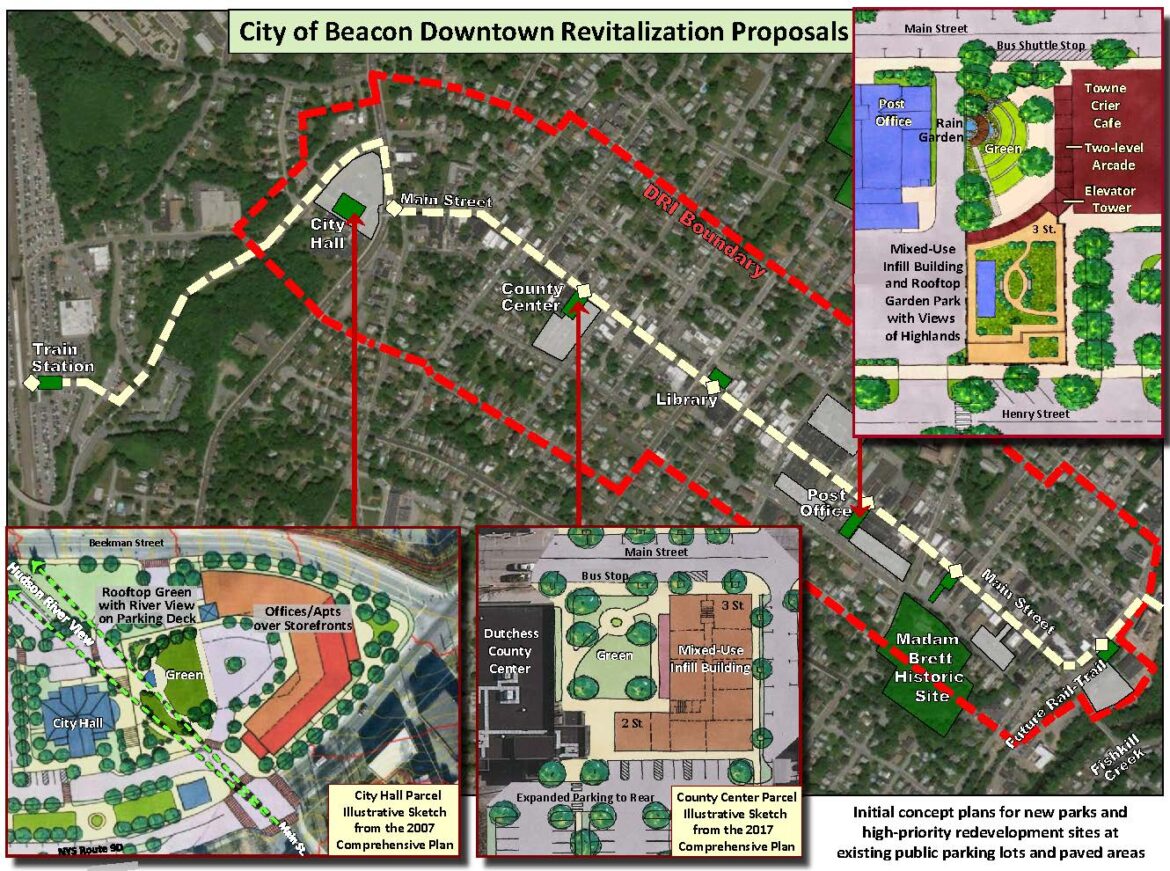 “The more of those buttons you hit, the better off you are in terms of getting this grant,” John Clarke, the city’s planning consultant, said on Monday. If selected, Beacon would be the first Dutchess County community to receive the grant.

The deadline for application is Sept. 15. After reviewing submissions, the Mid-Hudson Regional Economic Development Council will nominate two downtowns to receive $10 million each or one to receive $20 million. The state plans to distribute $200 million through the program this year. 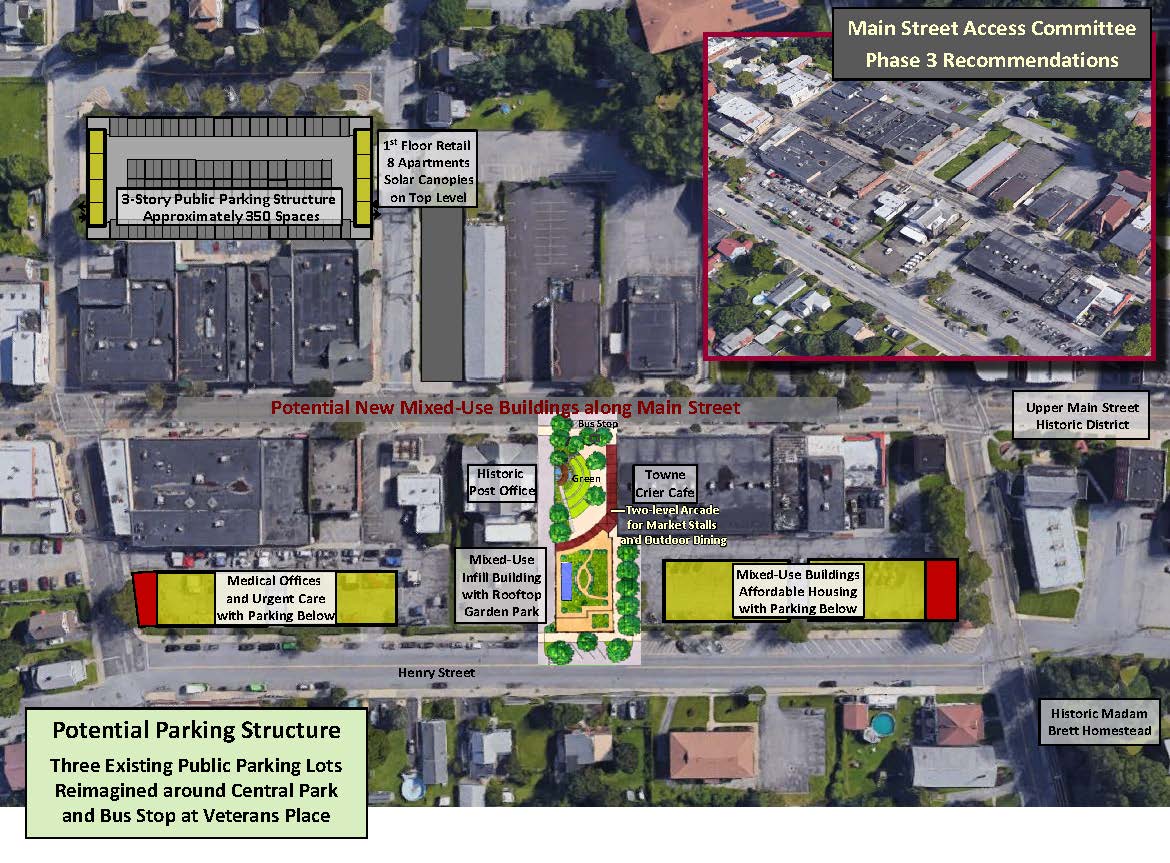 Pocket parks were part of the city’s comprehensive plans in 2007 and 2017 and could become feasible through “infill” development, which, by utilizing the city-owned spaces, would shore up gaps in Beacon’s downtown infrastructure.

“Parks are expensive,” Clarke said. “If you build something around them, the stores and the property owners can help contribute to the construction and, even more so, to the maintenance of those parks.”

Another focus is the reuse of more than a dozen municipal parking lots and city lands at sites such as City Hall and the Dutchess County center on Main Street, accounting for more than 600 spaces. 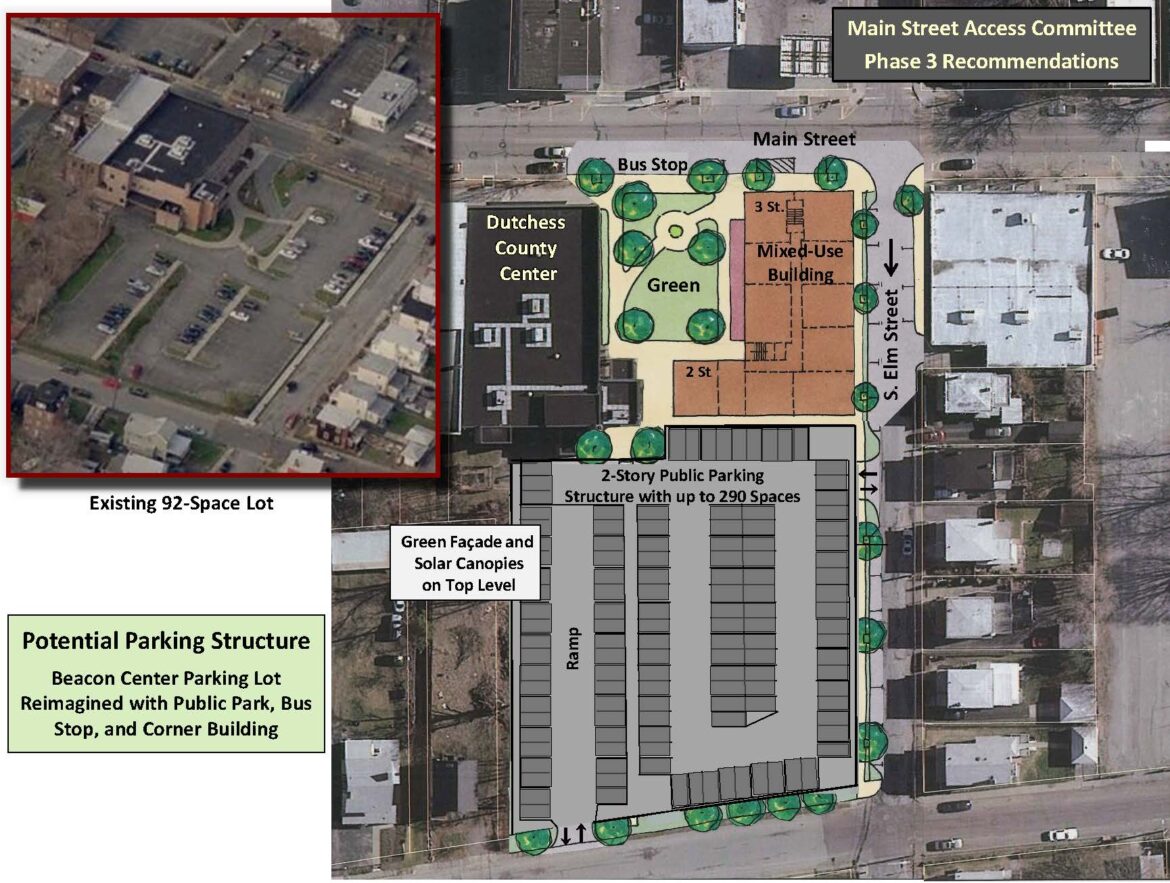 In their place, the city would install gardens and structures with offices and/or apartments above street-level retail. In addition, a three-story, 350-space parking deck bookended by eight apartments and topped with solar canopies could replace the lot behind Rite-Aid at 320 Main St.

Similar projects could be built along Henry Street, where the city’s Main Street Access Committee has proposed affordable housing with parking below and an urgent care center, also atop parking, behind the Sun River Health facility.

A two-story public parking deck with up to 290 spaces and solar canopies could be built behind the county office building, hidden in part by the slope of Dewindt Street.

Clarke on Monday called surface parking lots “unproductive” because they don’t contribute to the tax base yet “cost money every year in terms of paving and plowing and striping.” More bang for the city’s buck, he said, would be to “move away from surface lots into a parking structure, and instead of having the area dominated by asphalt you’d have it dominated by mixed-use buildings with affordable housing, jobs and office services.”

The idea to repurpose the parking lots, which came from the volunteer Main Street committee, is “a home run,” said Mayor Lee Kyriacou.

What is an Economic Development Council?

New York has 10 regional economic development councils that distribute funds for community development or job programs. Since 2011, more than $5.4 billion has been distributed to 6,300 projects.

The councils include elected officials as well as CEOs, academics and nonprofit leaders. Based in New Windsor, the Mid-Hudson council is chaired by Donald Christian, president of SUNY New Paltz. Its 29 members include Ned Sullivan, president of Scenic Hudson; Jonathan Drapkin, president and CEO of Hudson Valley Pattern for Progress; and Thomas Carey, president of the Westchester Putnam Central Labor Body.

The executives of the region’s seven counties, including Marc Molinaro of Dutchess and MaryEllen Odell of Putnam, are also members.

A handful of city residents who attended the Monday hearing — required this year for the first time as part of the application process — offered mixed feedback. Two suggested that Beacon should conduct a vacancy survey before it makes plans to build any new housing, including affordable apartments.

The state is expected to announce the award winners in December. If Beacon receives a grant, the next year would likely be spent meeting with planners and collecting feedback from residents, said City Administrator Chris White. Construction probably would not begin until 2023.

In addition to addressing Beacon’s affordable housing shortage and establishing a structured parking system, the plan is designed to create a more cohesive, accessible downtown.

“This is solving a problem that every city in the Hudson Valley has,” Clarke said. “If you go up to Hudson or Kingston or Poughkeepsie, they have a train station or a riverfront. But how do you get people up to the plateau and on top to Main Street?”

People are willing to walk short distances after parking or leaving public transit, he said, “but they’re not going to walk a mile and a half up a hill.”