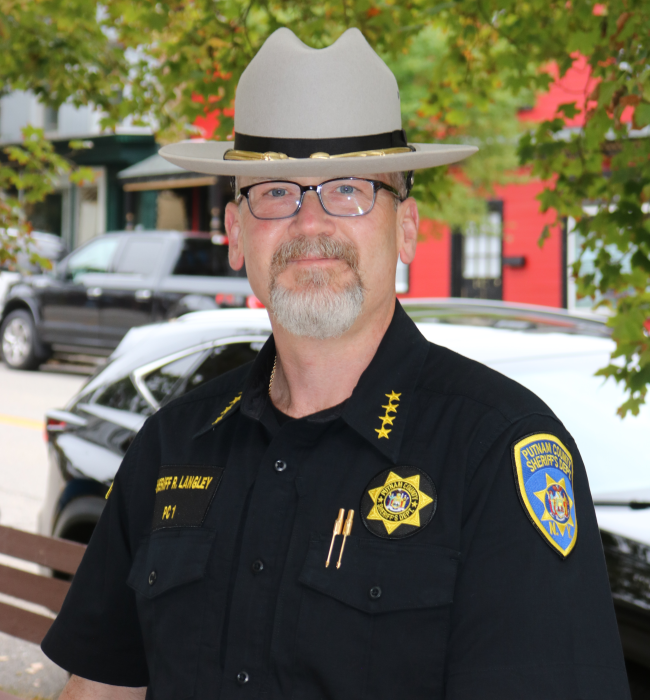 Robert Langley Jr., a Democrat who lives in Philipstown, is seeking a second, 4-year term on Nov. 2 as Putnam County sheriff. He spoke to The Current on Wednesday (Oct. 13); his responses to our questions below have been edited for brevity.

We have reached out to his opponent, Kevin McConville, a Republican who also lives in Philipstown and is a former chief of the Metropolitan Transportation Authority police, to arrange a similar interview.

Why do you want to be sheriff for another term?
I would like to continue implementing positive changes for the community, to make us safer, and to continue to keep Putnam safe, as the people’s sheriff.

Why should voters pick you over your opponent?
I’ve been a public servant for 40 years in emergency services; I started with the fire department and ambulance corps. In 1984, I started with the Sheriff’s Office. I spent my entire career here, working every facet, patrolling every street throughout the county. I grew up in this county, I know this county, I know how the Sheriff’s Office operates, I know how our jail operates. I’m uniquely qualified for the position. And I’ve run the Sheriff’s Department.

Should the Sheriff’s Department patrol the Hudson River?
It should have a marine patrol on the Hudson River. We have marine officers who often work the shifts in this area. We also have marine officers who live right here in this area. Although the boat isn’t always on the water, the response time is usually expeditious. In the interest of public safety, it is vital to have a law enforcement vessel within the jurisdiction that it serves, to enforce the laws of the state on the waterways. Without having that vessel out there, you’re providing an open invitation for bad behavior, which is a recipe for disaster and possibly death.

Over the years, the Sheriff’s Department has been embroiled in various incidents, including some involving alleged brutality or other conduct by deputies, resulting in costly litigation. What actions, if any, such as initiating more training in de-escalation, did you take as sheriff and what else would you do if elected?
First, I want to correct something. There’s no such thing as brutality. It could be a claim of “excessive force,” but under the law, there is no such thing as a charge of “brutality.” I’m quite sure you’re referring to a specific incident that was investigated independently by the district attorney’s office, which found no excessive force was used, commended the officers for showing great restraint and said that they should all be given a medal. We don’t arrest people because we don’t like them. We arrest people because we build cases and have cause for such an arrest. I don’t take anything personally and target people. That’s not why I’m here. I’m here to serve my community. It’s not about me, it’s about the community, and all the people, not a party. As far as steps: We have two officers who attended training to be instructors for de-escalation. We’re going to be sending officers to [courses] to be crisis intervention training officers, so they’ll be able to maintain a level for the training that our officers do get. We don’t just get the minimum 20 hours that the state requires; we do the full 40-hour course.

A while back, the Sheriff’s Department acquired a light-armored vehicle that was sometimes referred to as a “tank.” Have civilian law enforcement departments become too militarized? Is acquisition of military-grade equipment by sheriff’s departments and police justified, even if it comes with little or no cost? Does it depend on what the item is?
Under the previous administration, there was an incident in Southeast where someone was actually discharging rounds from their firearm. That vehicle enabled the Sheriff’s Office team to back up to the houses, allowing people to get into the vehicle safely, and then drive them out of there under the protection of the armored vehicle. It also enables us to bring members of the team into a hostile environment safely, so that they can address the aggressor. It’s a vital piece of equipment. It’s not militarized in any way. All military surplus equipment that law enforcement receives is demilitarized, meaning it doesn’t have military-grade weapons on it. It may be armored but it’s no different from a law enforcement agency going out and buying a $500,000 Bear Cat. We can spend $20,000 on a piece of military equipment that’s armored that does the same job. Recently we did have an incident in Putnam Valley on Pudding Street where a man was armed. He had discharged his weapon toward my deputies. That armored vehicle was there; it provides protection for the officers. I think it’s a vital program.

The Sheriff’s Department polices Nelsonville and Philipstown outside of Cold Spring. Could it also provide — with sufficient resources — police protection in Cold Spring if the village abolished its Police Department? If the Sheriff’s Department did take over and a charge were imposed, how would that amount be determined? And could it set a precedent for  charging Nelsonville, as well?
Years ago, the Village of Brewster contracted with the Sheriff’s Office; it was a dedicated patrol. Nelsonville does not receive a dedicated patrol. They receive the same service as the Town of Philipstown. As far as Cold Spring: To abolish the village PD would be doing a disservice to this community. With the volume of pedestrian traffic that comes in here every weekend, you need to have dedicated policing. If you would contract through the Sheriff’s Office, that would require us to hire additional personnel. That cost would be passed on to the village. I have a great working relationship with the village PD. And it’s nice to have that diversity of a different agency. If you relied on the sheriff, with 1.5 cars for the entire Town of Philipstown, you would be creating an opportunity for more crime. The mere presence of policing is a deterrent. When you see that police car parked by the tennis courts, everybody slows down. And on weekends, when you see the police officer on Main Street, people are a bit more well-behaved.

Who’s to blame for the frequent clashes between the Sheriff’s Department and the Putnam County Legislature and administration of County Executive MaryEllen Odell? Regardless of who’s responsible, can the voters trust you to try to foster better relations going forward?
Who’s to blame? I would say it’s playing partisan politics, above public safety, that is to blame. If people would not take political sides, we wouldn’t be where we are — if we would focus on what our true responsibilities are as elected officials, which is to the community, to the taxpayers. Often, we hear “fiduciary responsibility.” I understand what fiduciary responsibility is. It’s not just about saving money. It’s about investing in essential services: your 911 dispatch center, bureau of emergency services, sheriff’s office, highway department, department of social services, health department. These are governmental responsibilities. When you’re defunding law enforcement that’s already understaffed, you’re creating a substantial problem not only for the safety of the men and women in the Sheriff’s Office but for the people in this community. I fight for the people, for what’s needed.

Census data show Putnam residents as 71 percent white, 16 percent Latino-Hispanic and 4 percent Black. Does the Sheriff’s Department roster of deputies reflect that breakdown?
I also have correction officers who are part of the Sheriff’s Office; I have civilian staff. So it’s unfair to narrow it down to one specific group in the Sheriff’s Office. We have a diverse staff. We have officers of color, both Black and Latinx. We have white officers, as well. I have a supervisor in the jail who’s Black. I have a supervisor in patrol who’s Puerto Rican. So there is a diversity. I have another deputy who I hired who’s Latinx and another one in the process of being hired. I am restricted by guidance of the New York State civil service. I have to hire off the top three on a list. That could be three people or it could be 10 people or 20 people, depending on how people score on a civil service exam. I don’t know what color someone is on a list; it is a name and a number, that’s it. I called for a Spanish-speaking deputy sheriff/police officer civil service exam. That enabled us have officers who speak Spanish, but it doesn’t necessarily guarantee that I am going to get a member of the Latinx community. I have no control on how someone does on a test. I’m a firm believer that the state civil service exam for police officers should be part of the process. It should be a pass-fail exam. People should not be restrained by their test score. A good test-taker does not essentially make a good police officer. Your interview should be part of grading you; your past work experience should be part of grading. It would open us up to reach a more diverse community if the state would go with a system like that.

There are two candidates for Putnam County sheriff: the incumbent Democrat, Robert Langley Jr., and a challenger, Kevin McConville, a Republican. Both men live in Philipstown. This interview with Langley appeared in our Oct. 15 issue.

We did not interview McConville, but not for lack of trying. We contacted the candidate on Aug. 30 to invite him to participate in a live forum to which Langley had readily agreed; his campaign manager, John Nuculovic, said the candidate had a scheduling conflict on the October date we suggested but did not reply when asked for other possible dates. We emailed on Oct. 4, Oct. 11, Oct. 15 and Oct. 22 to see if we could arrange an interview and were told three times that Nuculovic would consult with McConville, but up to press time for our Oct. 29 issue received no confirmation of when he might be available.