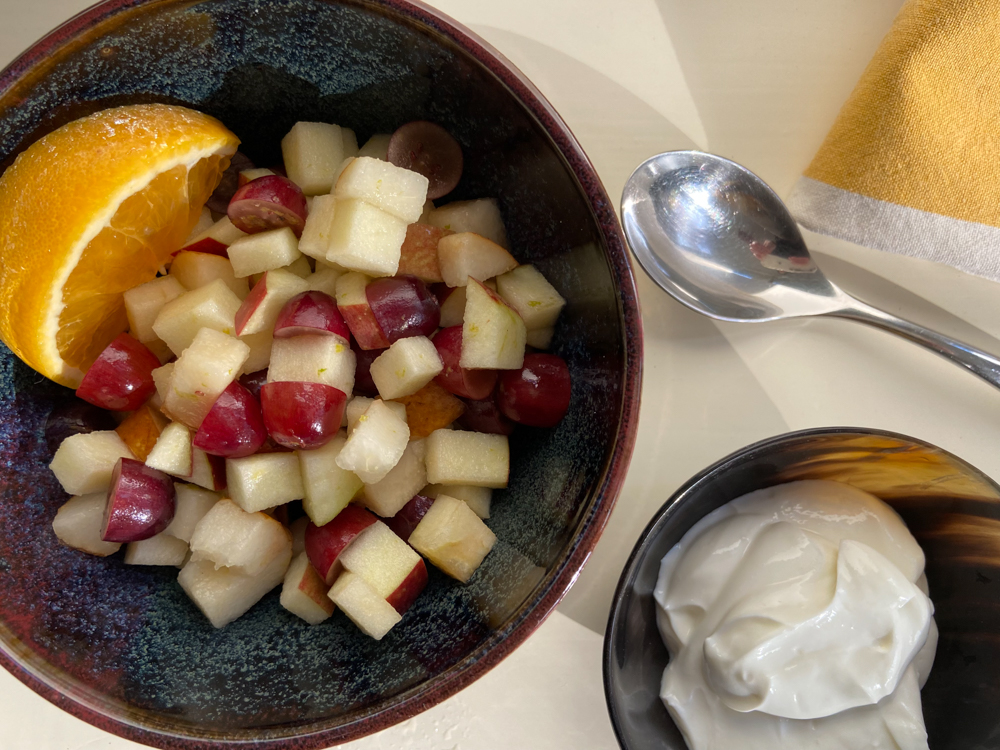 Recently, a friend heading home from college for October break stopped in to visit our youngest son, Dosi. As often happens with friends who haven’t seen each other in a while, the two soon discovered that catching up required oceans more time than they’d initially allotted, and Theo delayed his departure through one train, then another, and then a third. It was suppertime when the two finally came up for air, so I offered Theo some food for the train ride to NYC.

“How about an apple or a pear, then?”

“Sure,” he said. I removed a pear from the fridge, washed it, wrapped it in a paper towel and handed it over.

“Wait a minute,” said Dosi, incredulous. “You’re going to just eat a whole pear? Like that?”

You see, I began slicing up apples and pears for my kids when they were toddlers, and never stopped. It’s not because I like to baby my children (Is it? Lord, I hope not), but because I find that there is something nearly sublime about biting into a slim, almost translucent wedge of crisp apple or succulent pear, and I like sharing life’s pleasures with the people I love. 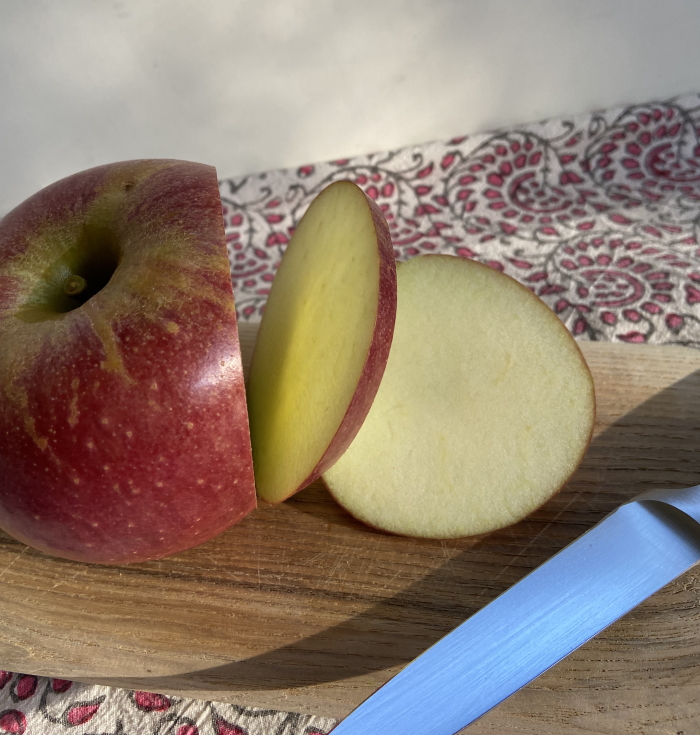 Apple slices on the way.

Of course, warm-hearted generosity wasn’t my sole motivation. I also realized when the kids were little that a big part of my job as a mother was to promote healthful foods to them — to make it hard for them to tell the difference between what they were supposed to eat and what they wanted to eat. And I admit there were times when the line between promotion and propaganda turned so thin as to be nearly translucent.

I remember the day this particular campaign began: Standing at my kitchen counter overlooking Union Square, I decided for no particular reason to cut an apple into flat slices, parallel to the stem, rather than making spoke-like cuts through the stem. I ate the first piece, a little bulge with lots of skin, then held up one of the remaining pieces, which was flat and circular. “Look!” I said. “It’s like a cookie!” The ensuing eureka moment was not, granted, as momentous as Newton’s apple-induced discovery, or for that matter, Eve’s, but held great significance in my household nonetheless. “Apple cookies” became a regular childhood snack.

These were followed by “banana cakes” — little, round banana slices arranged on a plate, which Dosi preferred to eat ceremoniously, with toothpicks. Indeed, it soon became clear that all five of us enjoyed sharing cut-up fruit, because even when someone wasn’t in the mood for a whole pear or apple, they would happily accept a few nice slices.

Several autumns ago, Peter and I went on a six-day hike through southern France for our anniversary. We stayed in a different hotel each night, and ate astonishing gourmet dinners and delightful breakfasts. But of all the foods we encountered, the ones that had the biggest impact on me were the fruit salads in the breakfast buffets. They were a revelation. All my life, I’d disliked apples in fruit salad because all my life, they’d been cut into big, obnoxious chunks that refused to mingle. But in one hotel after another, we came across lovely, small-dice apples, pears, grapes and berries. And morning after morning, I loaded up. In all my years of fruit-slicing trickery, how had I never stumbled upon this technique before?

Until Theo’s visit, I hadn’t occurred to me that a well-intentioned habit could snowball into a problematic rule, for Dosi at least. That afternoon, I felt like someone exposed in a white lie. “People do eat whole fruits, you realize,” I said to Dosi, sheepishly. Yet to this day, I still place small dishes of apple slices beside him when he’s reading or studying. And I start each fall morning with a bowl of small-diced apples, pears and grapes alongside my yogurt.

The combination of citrus zest and the merest drop of vanilla has a truly magical effect on the flavor of mixed fruits.

Stand the apple on end and cut into parallel slices. Repeat with pear. Cut out core and seeds and discard. Stacking 3 or 4 slices at a time, cut crosswise into a small dice. Halve the grapes. Combine in a bowl with a tiny splash of vanilla (you don’t want the vanilla flavor to be obvious), the lime juice and zest, and the orange juice and agave or honey, if using. Mix to blend flavors. Allow to sit 3 to 5 minutes for the flavors to develop. Serve at once.