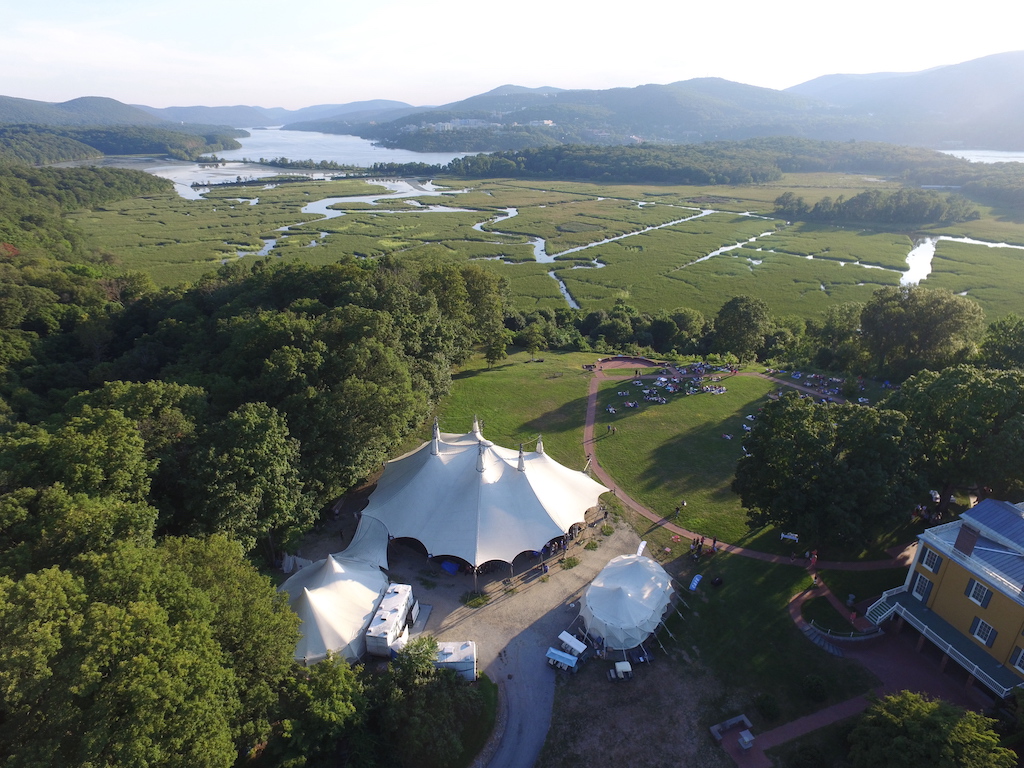 HVSF, which this week received a $2 million state grant, is seeking a permit to install its seasonal tent, shown here at Boscobel, at The Garrison in 2022 and 2023. (File photo by Phil Bulla)

Also applies for ‘special-events’ permit for next two seasons

The Hudson Valley Shakespeare Festival has been awarded a $2 million state grant for its planned new home at The Garrison in Philipstown after being named a “priority” project by the Mid-Hudson Regional Economic Development Council. The announcement was made Monday (Nov. 22).

At the same time, the festival has applied for a “special events” permit to stage its 2022 and 2023 seasons under a temporary tent at the former golf course. If the Town of Philipstown approves, HVSF plans to erect the tent used at its former home, Boscobel, on what used to be a tennis court and is now a gravel lot.

The grant for HVSF was part of $81 million awarded to 97 “shovel-ready” projects around the state through the annual Regional Economic Development Council initiative. The money is distributed by the Empire State Development Corp., which provides grants, loans and tax credits based on recommendations from 10 regional councils. There is still $150 million available.

The HVSF funds will come in the form of reimbursements for its project costs if it is approved by the town. Using an impact calculator created by the advocacy group Americans for the Arts, the festival projects it could double its annual local economic impact to $7.6 million by 2024. It said that would include adding nearly 50 new seasonal hires and five year-round administrative jobs.

“Support for the arts like this contributes to a more interconnected and resilient Hudson Valley, a community we’re very proud to be a part of and to serve,” said Davis McCallum, HVSF’s artistic director, in a statement.

The Mid-Hudson Regional Economic Development Council represents Putnam, Dutchess and five other counties. HVSF was the only recipient in Putnam County; there were three in Dutchess, including one in Beacon.

The state approved 18 regional development grant requests for projects in the Mid-Hudson region, including these:

HVSF said it hopes for construction of permanent structures to begin in January 2023 and conclude by May 2024, and include a Snake Hill access road; meadow seeding; and 225 parking spaces. The initial changes would also likely include a traffic signal at Route 9 and Snake Hill Road, with state approval.

Christopher Davis, The Garrison’s owner, has donated 98 of the property’s 200 acres to HVSF. The festival concluded its final season at Boscobel, its summer home for 35 years, in August.

“After going dark [in 2020] due to COVID, we can’t bear to miss another summer of gathering under the theater tent,” said McCallum. “We are committed to sharing the experience of professional theater and continuing our contribution to the rich cultural life of the Hudson Valley.”

In addition to a permanent tent, HVSF wants to build a 225-seat indoor theater and housing for its seasonal performers. The festival would also take over The Garrison’s restaurant, opening it as a for-profit venture six nights a week when the theater is operating, as well as for lunch and on weekends. The Garrison banquet hall would continue to host 125 to 150 events a year.

In a three-hour meeting on Nov. 11 devoted to the HVSF plans, the Philipstown Planning Board continued its state-mandated review of whether the proposal will have a “significant adverse impact on the environment.” If the board concludes it will not, HVSF would proceed to ask the Town Board to change the zoning to the property to allow for performances. With that approval, HVSF would return to the Planning Board to discuss its site plan.