Two residents of Kent, including one who was a candidate last year for the Carmel school board, were arrested on Nov. 10 and charged with federal crimes related to the Jan. 6 riot at the U.S. Capitol.

Gregory R. Purdy Jr., 23, and Matthew Purdy, 22, who are brothers, surrendered to the FBI in New Windsor. The criminal complaint was unsealed by a federal judge in Washington, D.C., on Nov. 12. The complaint also named a third man, Robert Turner, 39, of Poughkeepsie, whom the FBI identified as their uncle. He was arrested on Nov. 22 in California, according to the agency and court documents.

According to a LinkedIn profile, Purdy Jr. in 2016 managed a campaign by his father, Gregory Purdy-Schwartz, a Republican who hoped to unseat longtime state Assembly Member Sandy Galef, a Democrat whose district includes Philipstown and Kent. Galef won reelection that year with 65 percent of the vote. 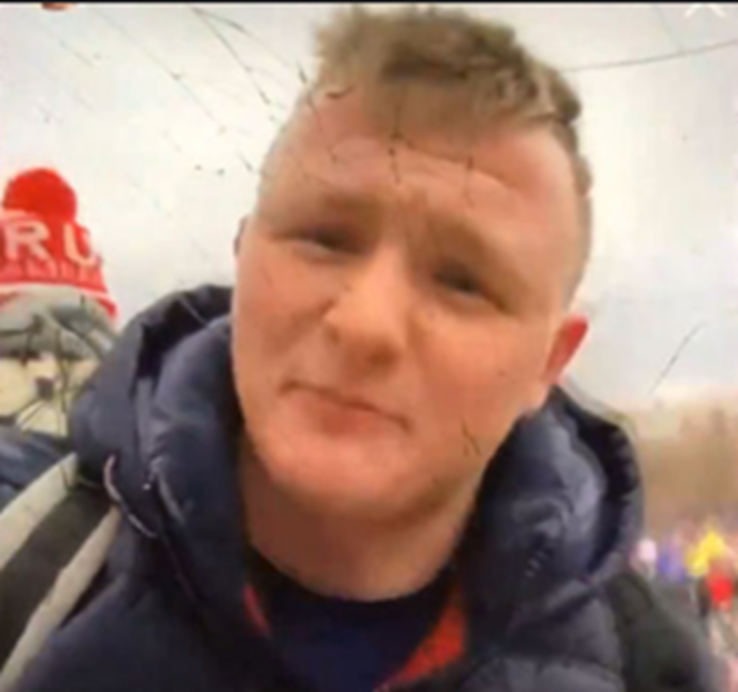 A photo distributed by the FBI that it says shows Gregory R. Purdy Jr. at the Capitol on Jan. 6.

Purdy-Schwartz, 50, who also resides in Kent, was recorded at the Capitol confronting police officers with his son, according to the FBI complaint, but has not been charged.

A 2016 Carmel High School graduate, Purdy Jr. was one of six candidates in May 2020 for two seats on the Carmel school board. He finished fifth.

Purdy Jr. was released on a $75,000 bond and Matthew Purdy on a $50,000 bond; both agreed to surrender their passports and any firearms. A preliminary hearing is scheduled for Dec. 8. Each man is being represented by a public defender. Turner was released on Nov. 22 on $15,000 bond and ordered to appear on Tuesday (Nov. 30) before a federal magistrate in Washington, D.C., by Zoom. 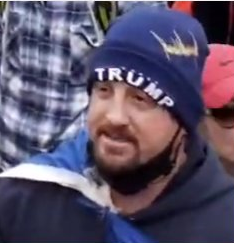 A man identified by the FBI as Robert Turner

Purdy Jr. has been on an FBI wanted list since soon after the riot, labeled Suspect No. 66 in what has grown to include hundreds of suspects that the agency is attempting to identify. Amateur “sedition hunters” online are careful about naming suspects until they are charged because of the risk of misidentification; Purdy was given the nickname #babyfaceinsider and tracked in videos taken at the Capitol by his distinctive red, white and blue winter coat. Turner, No. 376 on the FBI wanted list, was tagged as #DeepBlueSquander, a reference to his blue “Trump” hat.

Purdy Jr.’s LinkedIn profile says he studied briefly at Liberty University, a private evangelical university in Virginia, and in 2018 founded a marketing firm, Once Upon a Time. According to state records, he also launched a firm called Monopoly Assets in 2019.

By one estimate, about 140 police officers were injured during the Jan. 6 assault on the Capitol that was an effort to prevent the certification of President Joe Biden’s election win. One protester was shot and killed by a Capitol police officer and the riot is believed to have contributed to the deaths of at least three police officers. 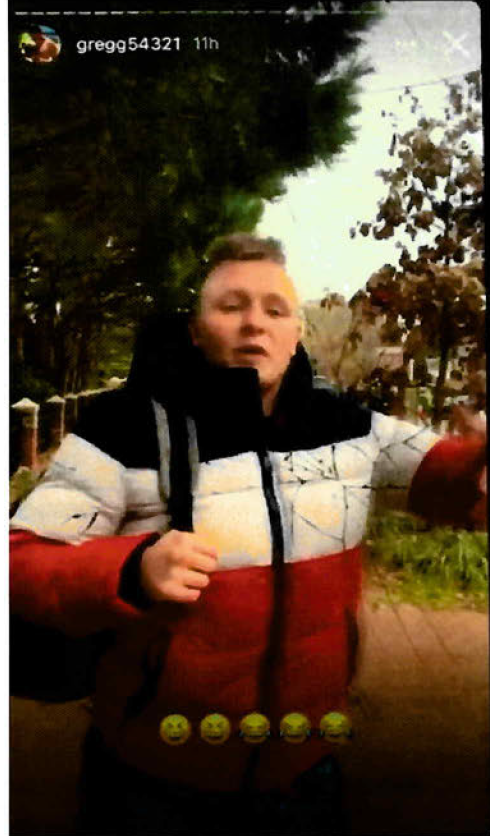 An image taken from an Instagram video that the FBI says shows Gregory R. Purdy in Washington, D.C.

Purdy Jr. documented his trip to the Capitol, and his confrontations with officers and entry into the building, in a series of videos and statements posted to Instagram, according to the FBI. They reflected his conviction that President Donald Trump had not been reelected only because of a conspiracy of widespread voter fraud that was being ignored by Congress and the courts.

According to the FBI, Purdy Jr. wrote: “Our country is in major trouble! Our government doesn’t listen to its own laws. Today was about taking our democracy back. We have undisputed proof of major voter fraud … yes, undisputable! And we have been denied the proper court proceeding and special counsel. When they don’t follow the rule of the land then we have to send them a message!”

His prosecution is similar to hundreds of others related to the riot in which the evidence being used against him was collected from social media. A review by the George Washington Program on Extremism of the criminal complaints against the 664 men and women who have been charged found that the FBI cited social media videos or posts in 80 percent of its filings.

About 20 percent of the Jan. 6 defendants have pleaded guilty, including Robert Ballesteros, 27, a Mahopac man charged with entering the Capitol. He will be sentenced in January. Men from Carmel, Newburgh, Pawling and Beacon also have been charged, and two remain imprisoned. All have pleaded not guilty.

In its court filing, the FBI said that “a member of the public” shared video clips and statements taken from Instagram before Purdy Jr.’s social media accounts were taken down.

In one clip, Purdy Jr. is shown speaking into a microphone at the front of a chartered bus with a caption: “Will be in DC in 1 hour!” In a second clip, the FBI said, Purdy Jr. is walking in Washington, D.C. with an older man in a blue jacket he calls “dad,” whom the FBI identified as Purdy-Schwartz.

(According to a newsletter sent to its members on Jan. 4, the Putnam County Firearm Owners Association organized a bus that left from Orange County at 5 a.m. on Jan. 6 for Washington, D.C., “as our President has requested.” An organizer for the group did not respond to an inquiry about whether Purdy Jr. had been aboard its bus.) 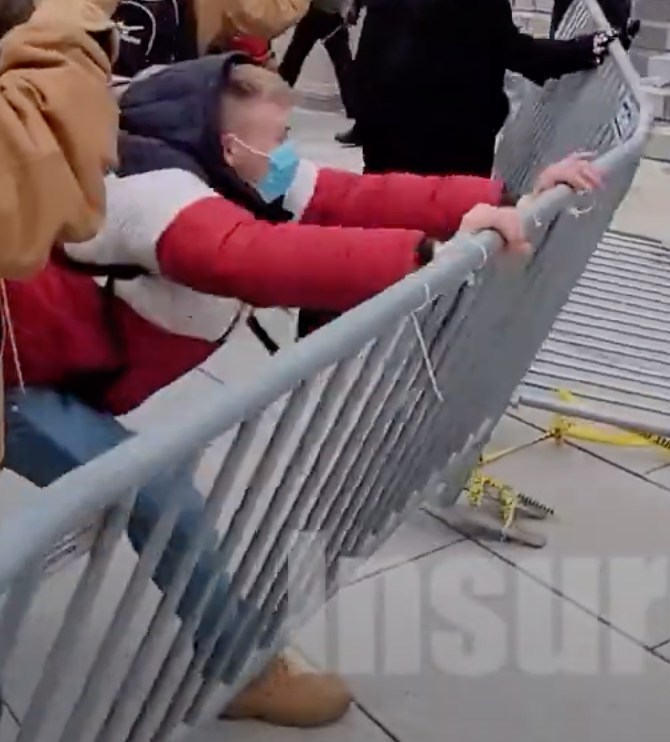 An image from a video taken on Jan. 6 at the Capitol shows a man identified as Gregory R. Purdy pushing on a metal barricade erected by police.

In its affidavit, the FBI cited footage retrieved from body cameras worn by two Metropolitan Police Department officers who were confronted outside the Capitol at 2 p.m. by Purdy Jr. and Purdy-Schwartz, about 20 minutes before the House and Senate chambers were evacuated. According to the FBI, Purdy Jr. told the officers, “You gotta let us by,” and his father said, “You’re going to make a decision… .”

Later, Purdy Jr. posted a video and wrote: “This was just after we pushed the top level gates over. The cops were swinging their batons trying to keep us back (Like 30 of them.) But after talking to them telling them to ‘Uphold the Constitution’ that helped a lot because instead of fighting us super hard like the last ones on the previous slide we easily pushed through them and they all ran!”

Purdy Jr. and Matthew Purdy entered the Capitol through a door that had been kicked in and remained inside for about 15 minutes, according to the FBI. 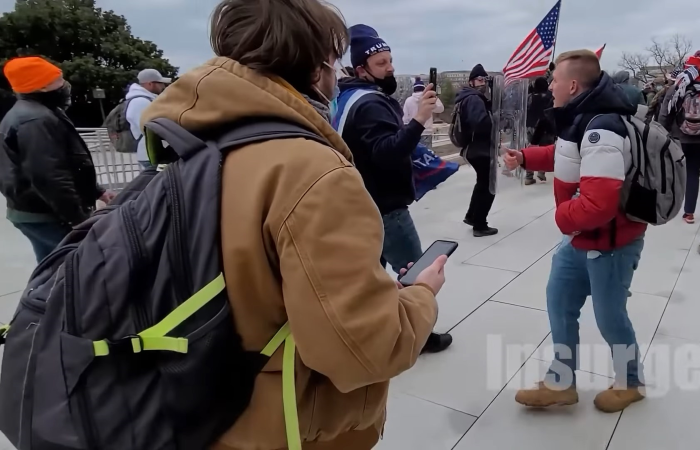 Three men are shown in a video taken at the Capitol on Jan. 6 that the FBI identified as Matthew Purdy (in tan jacket), Robert Turner (blue hat) and Gregory R. Purdy Jr. (red, white and blue coat)

Purdy Jr. also posted, according to the criminal complaint: “Inside the capital getting tear gassed! My eyes and skin still are irritated! Wasn’t as bad as I thought it would be.” He later promised to post more footage with Matthew Purdy and Turner from inside the Capitol and explain “how I got out of it with no charges and nothing on my record and got out of DC without being in a jail cell.”

At 3:30 p.m., Purdy Jr. was recorded outside the building yelling to the crowd: “Guys, we all gotta go at once!” after which he counted down from 10 to 1, then ran forward and pushed his way past the police line. Several officers chased Purdy Jr. and restrained him.

According to the FBI, Purdy Jr. later recounted on Instagram: “Today my group and I were key players in conducting peaceful pushes. The game plan was to talk [to] the officers and tell the[m] to stop following orders and uphold the Constitution… When they didn’t listen, we pushed through (without hitting them, of course) we did these peaceful pushes all the way into the capital building. Later in the day (after these videos were shot during the beginning of the pushes) was when I lead another peaceful push except I went to[o] far ahead of my group and then I got swarmed by 10 cops and got my ass kicked!”

The agency said it also obtained video footage Purdy Jr. posted that was taken during a nighttime drive with Turner and Matthew Purdy in which Purdy Jr. called the day “epic” and said: “We had enough people, they just weren’t scrunched up enough” during the assault to overwhelm the officers.