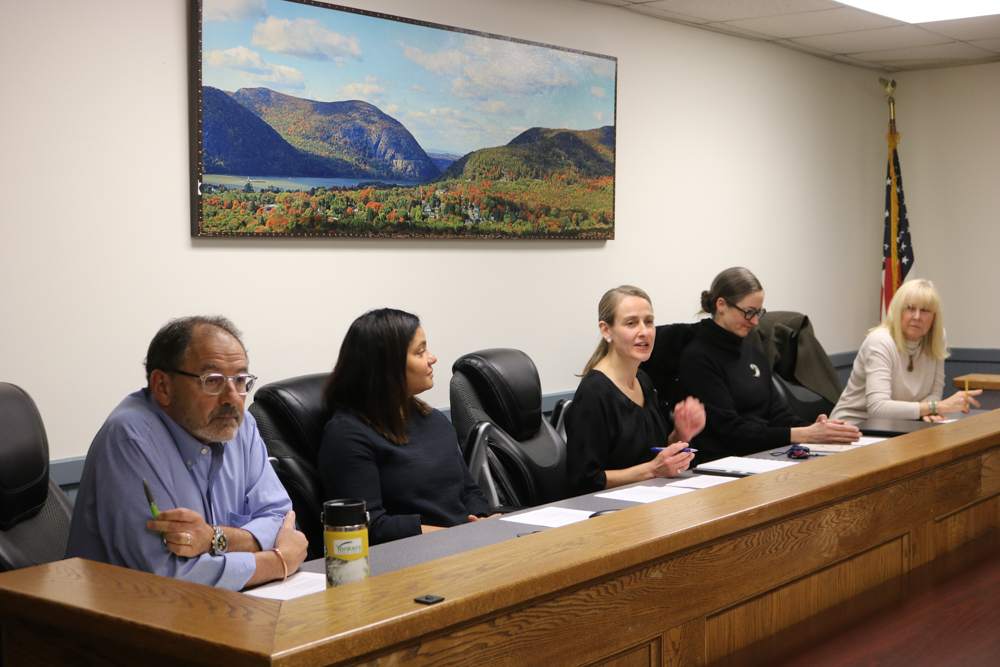 The Cold Spring Village Board had a different look at its Tuesday (Dec. 7) meeting compared to a week earlier.

Before the meeting began, Mayor Kathleen Foley and Trustees Cathryn Fadde, Eliza Starbuck and Tweeps Phillips Woods were sworn in by Village Judge Camille Linson. Each was elected on Nov. 2.

As her first act in office, Foley appointed Joe Curto to fill the trustee seat she vacated to become mayor. Curto will serve the remaining year of the term. Woods will also serve a year to complete the term of Heidi Bender, who resigned in April. Foley, Fadde and Starbuck will serve 2-year terms.

The board includes both political veterans versed in village affairs and political newcomers. Foley was elected trustee in 2020 after serving on the Historic District Review Board. Fadde was a trustee in 2014-15. Curto is a former Haldane school board trustee. Woods was elected in November after being appointed by then-Mayor Dave Merandy in May to fill Bender’s seat until the election. Starbuck is a first-time trustee and past president of the Cold Spring Chamber of Commerce.

The board’s first agenda included approval of more than 30 appointments, designations and policies, standard procedure when a new administration takes office. Woods was appointed as deputy mayor and Jack Goldstein as chair of the Planning Board, succeeding Matt Francisco, who continues as a member.

Francisco had been a candidate for trustee in the November election but ended his bid in June, along with Merandy and Trustee Marie Early, after Foley entered the race for mayor.

In a later interview, Foley emphasized Goldstein’s experience from over 20 years on the midtown Manhattan Community Board and his review of more than 1,000 varied land use applications. “He also led the landmark designation of the historic Broadway theaters; he’s well-versed in working in the context of historic community fabric,” she said.

She praised Francisco, saying he “brought professional rigor and deep content expertise” as its chair and that his continued membership on the board will be an “invaluable service.”

“Tonight, we are truly reorganizing the village,” Foley said, noting that trustees had been assigned as liaisons to departments and boards but that department heads would now meet with her and the deputy mayor weekly. She said she hoped the move would “ensure clear lines of communication for goal-setting, project coordination and progress reports.”

Foley said she asked the deputy mayor to make recommendations to “improve efficiencies, reduce bottlenecks and increase productivity,” at Village Hall based on Woods’ experience working for the New York City Mayor’s Office of Operations.

She implemented Woods’ recommendation to organize village management by work areas, such as finance, water, highways, tourism and recreation, with trustees acting as lead contacts on projects in each area and reporting to the mayor.

This approach, Foley said, “will help ensure knowledge is spread across the full board,” something she said is “important for organizational and institutional health and longevity.”

Foley said in a later interview that listening to department heads about priority issues “will be integral to formulating goals and objectives for the first six months of 2022.” She listed the garbage and recycling contract, plans for “long-delayed infrastructure projects” and completing the zoning code update as issues that need to be addressed soon.

■ The board approved the purchase of a 2021 Dodge Charger at a cost of $44,062 for the Cold Spring Police Department to replace a squad car totaled in an accident in early November.
■ Tuesday’s meeting was held in person. Those who were unvaccinated were asked to wear masks. Foley said meetings will continue in person for as long as possible but added that it seems likely there will be a return to Zoom at some point.
■ Beginning in January, the board’s monthly business meeting and all workshops will shift from Tuesday to Wednesday. All meetings will begin at 7 p.m.

One thought on “New Cold Spring Village Board Takes Office”