Putnam County legislators on Tuesday (Jan. 4) chose Neal Sullivan as their chair and gave final approval to a $40,467 fund transfer for a contract with new ambulance service provider Ambulnz. 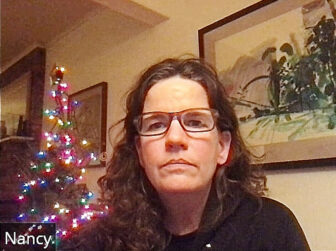 During a Putnam County Legislature meeting held Jan. 4, Nancy Montgomery was the only legislator to turn on her camera.

The actions occurred during the Legislature’s annual reorganization meeting, held by audio link, although Legislator Nancy Montgomery, a Democrat, adjusted her settings to appear on screen. Her eight Republican colleagues remained invisible. The Legislature cited pandemic restrictions as the reason for not meeting in person.

Montgomery voted “no” on the Sullivan nomination and money transfer, which rounds off the sum necessary for the deal with Ambulnz. The new provider bid $1.49 million for the first year of a five-year term, while EM Star/Empress, which the county had been using, bid $1.9 million.

“I haven’t heard from any ambulance corps and first responders that this is a good thing,” Montgomery said. She acknowledged that going with Ambulnz “could save the county money, it could be better service. We just don’t know.”

But the primary reason for her opposition, she stated, “is that I still don’t have the contract” between the county and Ambulnz, although she repeatedly asked for it. “There’s no checks and balances here,” Montgomery said, expressing incredulity that legislators are “asked to provide funding for a contract we’ve never seen.”

Legislator Carl Albano of Carmel replied that “we’re not approving any contract. The county executive’s office does that.” He added that since the county agreed to the contract, at this point “the money is owed.” Albano also said that he believes questions about Ambulnz had been sufficiently answered.

Before the vote to appoint Sullivan, who represents parts of Carmel and Mahopac, Montgomery noted the lack of other nominees. As an alternative, she proposed herself, but received no support.

Sullivan has often clashed with Montgomery, at times interrupting or belittling her, conduct that Montgomery said demonstrates he “would not be a good fit” as legislative leader “and not a good fit to represent the people of Putnam County.” She suggested that his actions and those of the Legislature overall in 2021 often appeared “politically motivated. The people of Putnam County deserve stronger leadership.”

However, after the other legislators chose Sullivan, Montgomery congratulated him, telling him that “I hope we can work through many of the difficulties we’ve had and work together, despite our differences, for the people of Putnam County.”

The Legislature also voted 7-2 to appoint Legislator Paul Jonke of Southeast as deputy chairperson. Montgomery backed Jonke’s nomination, but Legislators Ginny Nacerino of Patterson and Amy Sayegh of Mahopac voted “no,” without elaborating.

One thought on “Putnam Legislature Picks Sullivan as Leader”