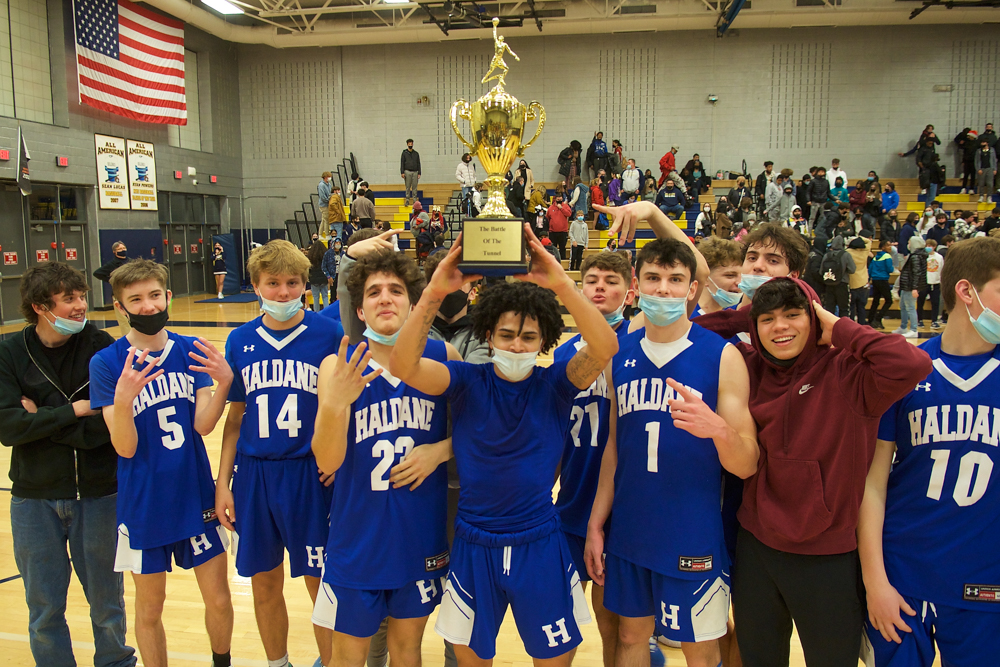 Standout defense and a clear rebounding advantage allowed the Haldane High School boys’ basketball team to build a lead that it never relinquished to defeat Beacon, 53-39, on Wednesday (Jan. 26) in the third annual Battle of the Tunnel game.

The Haldane girls also won, holding off the visiting Bulldogs, 36-35.

The Haldane boys have been enjoying a terrific season, with only one loss in 13 games, while the much-improved Beacon team, at 8-5, is also having a strong campaign in its first year in Section IX. But by the second quarter of the game, which was played at Beacon High School, it was clear Haldane had an advantage on the glass, and the Blue Devils used second- and third-chance baskets to build a five-point lead at halftime, 28-23.

The Bulldogs cut into the deficit early in the second half but Haldane held on and led by eight, 39-31, at the end of three quarters. In the fourth, Haldane played with more intensity, going up by as many as 16 points, and Beacon couldn’t get the deficit under 10 the rest of the way.

Soren Holmbo led the Blue Devils with 16 points, Tristen Reid and Ryan Irwin each had 12, and Matteo Cervone finished with nine. 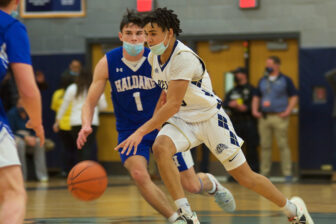 Adrian Beato brings the ball up amid pressure from Ryan Irwin. (Photo by S. Pearlman)

“The difference was rebounding,” said Beacon Coach Scott Timpano. “They were significantly better on the boards, getting second and third chances. We also had a lot of turnovers. We had a great first quarter, but they started playing more physical.”

Haldane announced this week that spectator passes will no longer be necessary to attend home games, but that masks are required and fans must sit 3 feet from each other, except for members of the same family. No visiting team spectators are permitted.

All Haldane home and some away games are livestreamed at events.locallive.tv. For Beacon games, see beaconk12.org/athletics or nfhsnetwork.com.

Haldane Coach Joe Virgadamo pointed to his team’s defensive effort, which limited Beacon to six points in the second quarter and eight in the fourth.

“Our goal was to hold them under 56 points,” he said. “That was great defense, one of the lowest-scoring games we played. We also rebounded well, and our bench also gave us some great minutes. Matteo was a beast on the boards, and Ryan Irwin has been great for us all season. Ben Bozsik and Will Bradley played well, and Tristan Reid played a great second half for us. I’m proud of our guys — that’s a really good Beacon team.”

Beacon won the first Battle of the Tunnel, 60-57, in front of a packed gym at Haldane in 2020. Haldane won last year, 70-55, in front of mostly empty stands at Haldane because of pandemic restrictions.

On Tuesday (Jan. 25), Beacon picked up a 54-46 win over Minisink Valley at home, with Jamel Sellers-Blackwell leading the Bulldogs with 15 points. Darien Gillins and Green each had 12, and Green closed out the game by hitting 8-of-8 free throws.

“We played a great fourth quarter,” Timpano said. “The guys did a great job pulling away at the end.”

Haldane defeated Franklin Roosevelt, 64-53, on Monday at home, with Irwin leading the offense with 21. Reid had 14 and Cervone added 13.

Haldane is scheduled to visit Bronxville on Monday (Jan. 31) while Beacon will travel to Monticello today (Jan. 28) and host Washingtonville at 6:30 p.m. on Tuesday.

The Haldane girls’ team rode a 13-4 third quarter run — and held off a Beacon surge at the end — to edge the Bulldogs by a point on Wednesday in a game played in Cold Spring.

After a low-scoring, but close, first half that saw Beacon leading 10-7 after one quarter and 17-14 at halftime, the Blue Devils were up 27-21 after three.

The Bulldogs outscored Haldane, 14-9, in the fourth quarter, but it wasn’t enough.

“You know what you’re going to get when we play Haldane, at Haldane: tough, scrappy and high energy, and that’s exactly what we got,” said Beacon Coach Christina Dahl. “They’re an unselfish team, and came at us with a balanced scoring attack. But we didn’t play our best game on offense. We had too many turnovers, and too many missed free throws. Defensively, we did a decent job, led by Daveya Rodriguez,” who had 11 rebounds and five steals.

“It was a tough defensive battle,” said Haldane Assistant Coach David Tiru, who filled in for Coach Jessica Perrone. “We have a lot of heart and talent on our team, which was reflected by the way we were able to push through.”

“That was a well-coached Marlboro team,” Dahl said. “We knew that we were in for a dogfight. We were able to compete for three quarters-plus, but ran out of gas.”