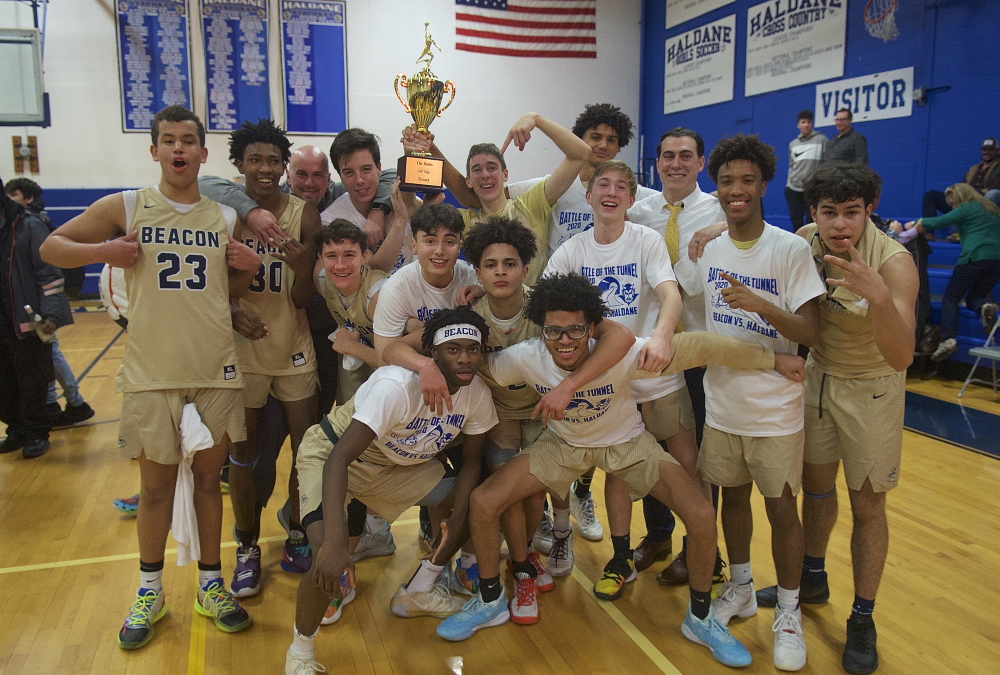 The victorious Beacon Bulldogs with their trophy. (Photo by Skip Pearlman)

The gym at Haldane High School was packed and rocking on Friday night (Jan. 17) as the Blue Devils boys took on Beacon for just the second time in decades.

The two teams gave the crowd, which filled every seat along with every available place to stand, an electric performance. Beacon led by as many as 14 but had to withstand a furious late rally by Haldane, which took the lead briefly before falling, 60-57, when a 3-pointer by senior Alex Kubik bounced off the rim at the buzzer.

“That was a total blast,” Beacon Coach Scott Timpano said after the game. “The atmosphere was amazing, and winning certainly helped everything. There were so many people in that little gym.”

Hoping to continue the game as an annual tradition, the schools purchased a Battle of the Tunnel trophy for the winner to keep at its school until the next contest.

After trailing for the entire game, Haldane tied it in the fourth, and held a tenuous 54-53 lead with just under a minute to play, much to the delight of the home fans.

Tristen Reid scored with 36 seconds to put Beacon back on top, but freshman Matteo Cervone hit a free throw to tie the game at 55-55.

Quazir Hayes’ bucket with 23 seconds left put the Bulldogs in front for good, 57-55, and Ian Bautista’s two free throws gave Beacon a 59-55 lead with 15. Haldane captain Alex Kubik scored a quick layup to make it 59-57 before Adrian Davis missed one of two free throws to leave the door open for the Blue Devils.

At the other end, with time expiring, Kubik, on the right elbow, took a pass from Matt Champlin for his last-second 3-pointer.

“This was a special night,” said Haldane Coach Joe Virgadamo. “We had opportunities. They played a strong first half, and we had a strong second half, that’s why we were in the game. Give Beacon credit — they played good defense and capitalized on turnovers.”

Hayes finished with 19 points and Shane Green added 13 and six rebounds to lead Beacon (5-10). Mame Diba had a career-high 27 points to pace the Blue Devils. Beacon also prevailed in the junior varsity game, 62-49.

Photos from the junior varsity game

“The atmosphere was crazy, unbelievable,” Green said. “Both teams brought it, and we came out on top. A great game, great atmosphere, and I’m glad we got the win.”

Kubik added: “That was the most intense atmosphere I’ve played in. It was a lot of fun. Going in, we knew we could keep with them, and we played a great game. I love that we’re playing them, it’s a great thing.”

Beacon didn’t allow Haldane to make a single 3-pointer in the game, a first for the Blue Devils this season. “We also only hit 11-of-20 free throws, and we still had a chance to tie it at the end — I’m pretty happy with that,” said Virgadamo.

Timpano said he was pleased with his team’s defensive effort.

“Our guys gave an excellent effort to get out and cover their guys and contest shots,” the coach said. “Tre Smith [five rebounds, six assists, three steals, no turnovers] did a great job on Champlin, Tristen Reid [eight points, five assists, six rebounds, three steals] played a good game, while Quazir, Shane and Adrian all gave us big baskets.”

According to Virgadamo, who attempted to research the history of the two boys’ teams matching up, the only previous game in perhaps the past 50 years was a 68-50 Beacon win at home on Jan. 25, 2012.

Haldane also picked up a 72-47 victory over Yonkers Montessori Academy on Tuesday (Jan. 21), with Champlin leading the way with 24 points and Cervone adding 16. The Blue Devils improved with the win to 9-3.