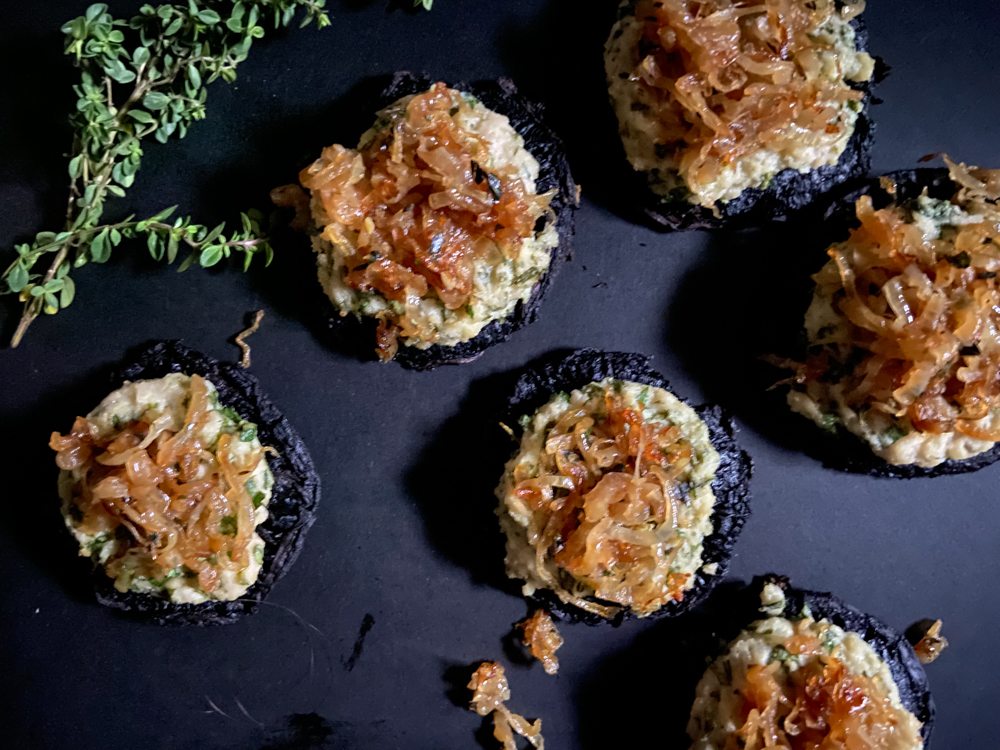 Portobellos are the shoulder pads of the mushroom world. For one thing, they take up too much space. They’re also basically fraudulent as well as passé, having had their moment of fame in the 1980s and ’90s.

I’m therefore less than proud to admit that I recently roasted up a baking sheet of portobello caps, smeared them with herby goat cheese, topped them with caramelized onions and served them for dinner. Moreover, they tasted quite great.

The recipe was something I’d first thrown together one afternoon while cooking at summer camp, after a case of portobellos showed up in place of the creminis that I’d ordered. This time around, I couldn’t blame my suppliers. I was simply craving mushrooms’ earthy, umami flavor and didn’t feel like dealing with a lot of small fungi. Plus, they gave me an excuse to have the oven on for an extended spell, something I’ve been especially grateful for these past few weeks.

Thus I was predisposed to overlook portobellos’ questionable attributes. Consider, for example, their origin story: Portobello mushrooms are actually nothing more than overgrown creminis. When, in the 1980s, mushroom growers realized they couldn’t sell the meaty behemoths, they invented a new identity for them. The name “portobello” was dreamed up by American marketers to sound vaguely Italian.

Some people call them “portabellas” instead, and you can, too. The former, literally translated, means “handsome harbor,” the latter “beautiful gate.” Or you can use the names to differentiate between boy mushrooms and girl mushrooms, if you like to think of your vegetables as gendered. The American Mushroom Council, for its part, has decided to call them “portabellas” despite the fact that “portobello” is much more widely used across America.

But what’s in a name, as the bella Juliet put it, especially one invented by a marketing team? At the end of the day, every food must succeed or fail on its own merits. Yet here, too, portobellos have struggled to maintain their dignity. I remember that the first ones I encountered in New York City restaurants were beautifully cooked, with a tender, melting texture and a deeply concentrated flavor. Over the years, however, chefs must have grown impatient with these fungal slabs, or else confused diners got carried away with the idea that portobellos were the vegetarian equivalent to steak, as various slogans of the time suggested.

Whatever the reason, portobello mushrooms began to be served undercooked, often drenched in balsamic. To my mind, a rubbery, cold-hearted portobello has less in common with a rare steak than it does with a half-cooked potato or raw pie crust. The kindest thing you can say about it is that it has not lived up to its potential.

My recipe, therefore, gives these mushrooms the time they need. It’s also versatile, as you can substitute bread crumbs or leftover rice or polenta for the potato puree. And while its most basic iteration is quite simple, as I mention above, even then it’s not a dinner-on-the-table-in-10-minutes snap. But what’s the rush? Though my days of power suits and breakfast meetings are mercifully long gone, the past never really disappears from the kitchen. Rediscovering a forgotten ingredient is like switching on the radio to Dire Straits singing “when you gonna realize it was just that the time was wrong?” and discovering that it sounds better today than it ever did.

You can substitute leftover rice or polenta for the potatoes, or skip the starch altogether and just top the roasted mushroom caps with a smear of herb-and-garlic goat cheese, the onions and the parmesan.

1. Heat the oven to 375 degrees. Caramelize the onions: Heat a large skillet over medium. Add a splash of olive oil, then the sliced onions; sprinkle with salt and pepper. Give it a stir, then spread the onions across the surface of the pan, patting them down gently. Cook about 30 minutes, stirring very occasionally at first, then a little more frequently as they brown, scraping the browned bits off the bottom of the pan. Cook until deep golden-brown. Stir in the fresh thyme and set aside.

2. Meanwhile, roast the mushrooms and garlic: Lay the mushroom caps, gill-side up, on a parchment-lined baking sheet along with the garlic cloves. Drizzle with olive oil and sprinkle with salt and pepper. Roast about 30 minutes, until quite soft, flipping the mushrooms over halfway through. (When flipping, I like to collect any juices that have gathered in the mushroom caps and add it to the goat cheese mixture.) Set aside, keeping the oven on.

3. In a medium saucepan, boil the peeled potatoes in salted water just until soft. Drain and pass through a ricer.

4. Return the saucepan to the stove. Over medium-low, warm the goat cheese and butter or cream until soft and blended. Mix in the potatoes and chopped spinach; season to taste with salt and pepper. When the garlic is roasted, squeeze it from its skin, mash it with a fork and add to the potato mixture.

5. Turn the mushrooms gill-side up. Place a scoop of the potato mixture on each and press flat. Top with the parmesan and a dollop of the onions. Return to the oven for about 7 to 9 minutes, or until golden.