As the snow and ice melt off the vegetable beds this week, I’m going to seize the moment to prepare a couple for planting. In just a few weeks, although it feels hard to believe, I can plant seeds of cold-hardy vegetables. Imagine eating freshly picked peas, lettuce and spinach in May and June.

Recently, I covered methods for growing plants outdoors in winter using hoops and fabric and creating mini-greenhouses out of plastic milk jugs. Now it’s time to consider when and how to sow seeds in the garden.

The last frost date in our area is May 15. On average, that means temperatures would be high enough that outdoor plants are out of danger from freezing temperatures at night that could kill or damage them. 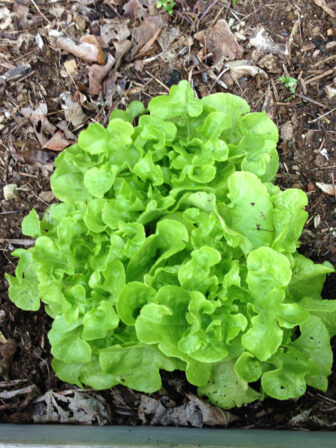 Not yet! But sooner than you might think. (Photo by P. Doan)

If you’re a leafy green and root vegetable fan, mid-March can be an ideal time to start the growing season without any other implements. Some vegetables grow more optimally in cooler, damp weather, including peas, fava beans and greens like spinach and arugula. Cold-hardy characteristics include being tolerant of frost, freezing temperatures and germination at temperatures as low as 40 degrees. When temperatures soar in June and July, their growing season is finished until fall.

Seed packets for early season crops use the phrase “sow directly when soil is workable.” To a farmer, workable soil means the tractor won’t get stuck in the mud. For gardeners, the soil should be relatively dry. If you squeeze a clump in your hand, water shouldn’t come through. Raised beds offer an advantage here by generally draining well.

Soil temperature, soil moisture and air temperatures affect seed germination and determine when to plant, too. Peas, spinach, arugula, mustard greens, rutabagas, chicory, scallions, early harvest onion sets, turnips and fava beans all can be sown directly in the garden when soil temperatures are at least 40 degrees. Germination will be affected by weather, as all things go in the garden, but with a bit of luck, the harvest will go mostly as planned.

Check individual seed packets for information about the cultivar or variety you’ve chosen since some seeds are bred or hybridized for different traits. The guidelines for species shared here are general.

For my own garden, I’ve organized seed packets for direct sowing on March 15 for seeds that can be planted “when soil is workable”; April 15 for “2 to 4 weeks before last frost”; and May 15 for “after final frost date.” That gives me a two-month range to get the garden moving.

To prepare the raised beds, I’m going to top-dress the soil with my own compost. The organic matter will contribute to drainage and nutrients. An at-home soil pH test kit will indicate if I’ve managed the right level — a neutral 6 to 7 pH — for nutrient uptake. Shredded leaves and straw go on top as mulch after the seedlings sprout and are thinned.

NY Department of Environmental Conservation
Free seedlings for stream buffers; any homeowner with at least 50 feet of land on a waterway is eligible.

I neglected a couple of beds last year and all sorts of weeds happily took up the space. As a first step, I need to assess what I’m dealing with. I tried hard not to look but I think an Oriental bittersweet vine showed up. An aggressive, invasive weed, the bittersweet drops a lot of seeds and is difficult to eradicate. Since I’ve caught it early, I have a good chance, but I’ll be chopping it back for at least a couple of years, I’m sure. I’ll hand-pull and dig out the roots of any vines from last season as a first step.

If the rest of the weed issues are mostly run-of-the-mill, annoying but not garden-destroying weeds, I’ll try solarizing the beds. Using clear plastic left over from indoor painting, I can cover each bed and let the sun heat up the soil for 4 to 6 weeks beneath it.

The longer I leave it on, the more effective it will be at killing all the weeds. If the weather cooperates, I can plant the beds by July, a great time to think about what I want to harvest in September and October.

Hand-pulling the weeds in the raised beds would break up the soil surface, bringing a whole new set of weed seeds up from below and making the problem worse. I’d rather sacrifice a month or two of planting time and try to reset the weed issues.

3 thoughts on “Roots and Shoots: Countdown to Seed Sowing”