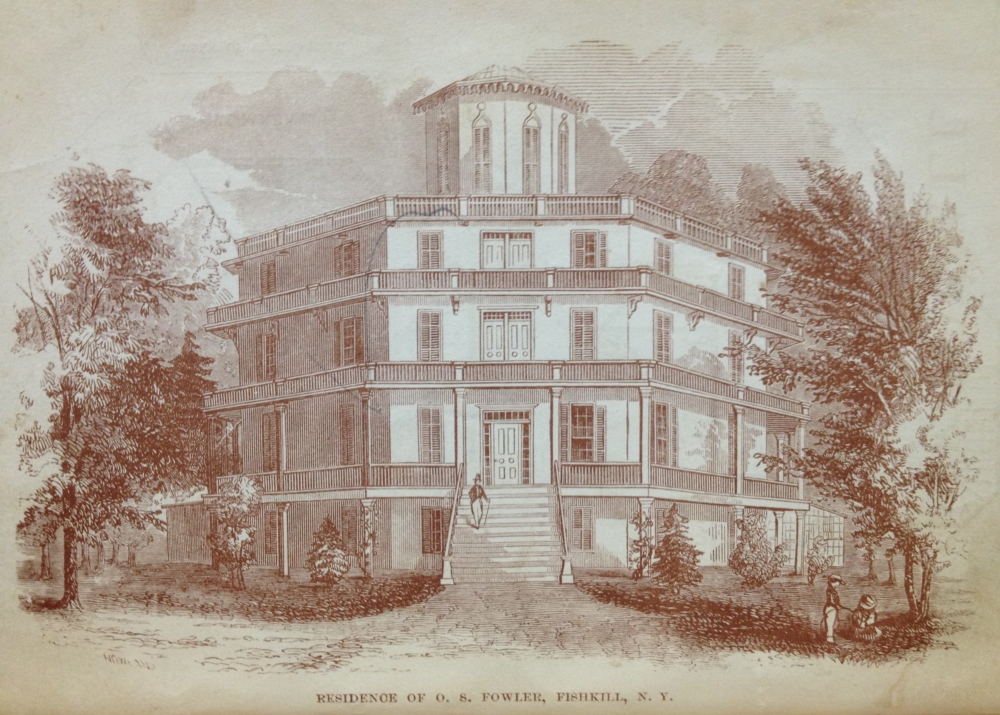 An eight-sided home built in Fishkill by Orson Fowler

Charles Ledwich, of Alsdorf & Ledwich of Fishkill Landing, received a patent for a water-closet [toilet] attachment that allowed the porcelain bowl to be removed for cleaning.

The Howland Public Library (below) opened on Aug. 5 in a newly constructed building at 477 Main St., now the Howland Cultural Center. It was named for Gen. Joseph Howland, the first president of its board, and designed by his brother-in-law, Richard Morris Hunt. [The library moved to its present location at 313 Main St. in 1976.] 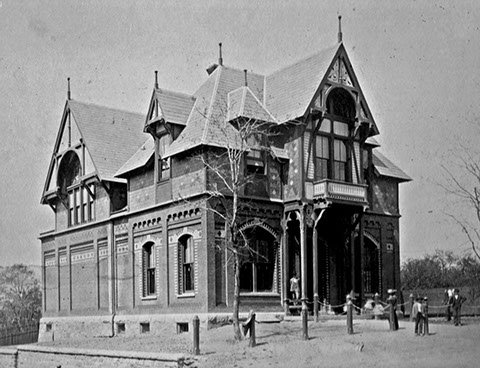 Defenders of Matty Howe, 22, of Fishkill, who was accused of strangling her newborn, said that her seducer had deserted her and that her parents had ceased their visits to their daughter in the county jail. While imprisoned, she began a relationship with another inmate, Eugene Schmidtlein, who was charged with grand larceny. They decided to wed, but the jailer refused to summon a minister or allow the couple to attend court together to be married by a judge.

The Phoenix Manufacturing Co. of Matteawan introduced a sewing machine controlled by a foot pedal that could run at full speed for 75 minutes and allow its operator to create up to 2,500 stitches per minute. 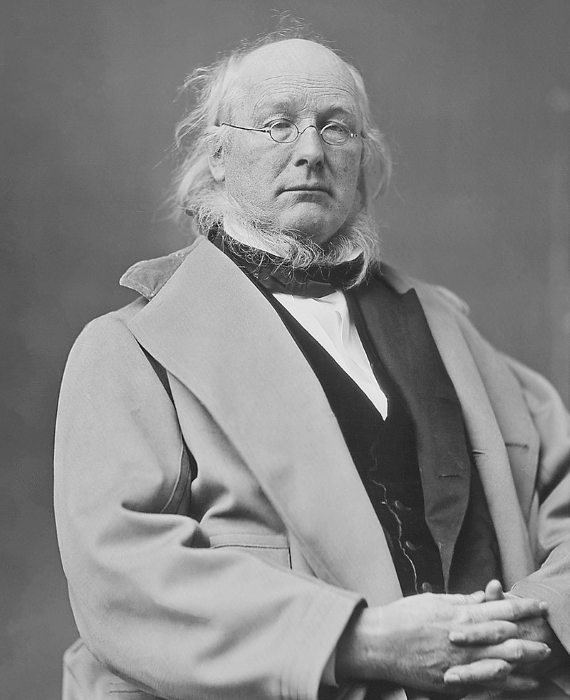 Horace Greeley ran for president in 1872 with local support.

The Matteawan and Fishkill Landing chapter of the Greeley and Brown Club reported it had 125 members. The men supported Horace Greeley (right) for U.S. president against the incumbent, Ulysses S. Grant. Greeley’s running mate was Benjamin Gratz Brown, the governor of Missouri.

Three men were loading a wagon with gravel at Toohey’s Grove at Matteawan when a bank gave way and buried one of them. He managed to move his hands enough to create a breathing space and was rescued.

The 90-foot steamboat William Baxter, which was built at the Fishkill Landing Machine Co., made its maiden voyage, to Newburgh to take on 100 tons of cement bound for Buffalo. The Newburgh Journal noted that the boat, powered by two 4½-foot propellers, could reach a speed of 5 mph while consuming only 10 pounds of coal per mile. It was constructed in an attempt to secure a $100,000 prize offered by New York State for a way to move ships faster and cheaper than with horses along the 352-mile Erie Canal.

In New York City, The Church Journal published an ode signed F.W.S. to the newly dedicated Howland Library, including this stanza: “Honor to him who builds for nobler uses / On deep foundations rears his solid walls / A graceful temple raises to the Muses / A refuge sweet within its airy halls.”

A milk peddler in Matteawan was arrested on charges that he assaulted the 11-year-old daughter of a customer after offering her a ride in his covered wagon. Extra guards were stationed at the jail to prevent any “summary justice” by angry residents or the girl’s father.

John Haight, of Fishkill Landing, planned a trip to England to research a genealogy he planned to publish of his family.

John Murphy, the captain of a brick sloop, was shot and wounded during a strike at Lahey & Bowe’s brickyard at Fishkill Landing. 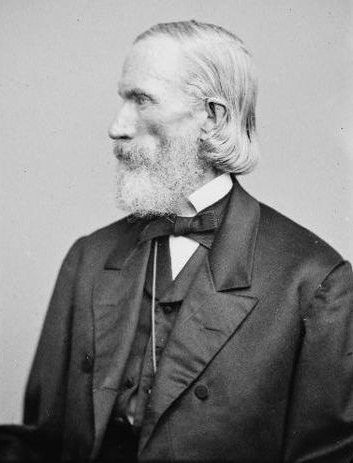 An eight-sided home built in Fishkill by Orson Fowler (right), the famed phrenologist and author of The Octagon House, had to be destroyed with dynamite when Fowler decided to rebuild because it had been constructed entirely out of concrete.

According to an account in the New York Evening Journal, Albert Knapp, a farmer residing near the Fishkill mountains, was attacked in his cellar by four copperheads. He stunned one snake with a club while another wrapped itself around his leg. Friends came to his aid, and he was not bitten.

Henry Trostler (or Frostlar), 49, was released from the Matteawan asylum for the criminally insane and ordered to return to his native Austria. In 1879, while working as an usher at a New York City theater, he shot at a cashier who was flirting with his wife, sending a bullet through the man’s hat. A lawyer said his newly freed client refused to board a steamer to Hamburg until he saw his daughter, who had been an infant when he was committed and was thought to live in Chicago.

Two inmates escaped from the Matteawan asylum by removing a window catch with a contraband screwdriver.

The superintendent of the asylum read a paper at the annual Prison Association of New York conference titled, “Who is the Insane Criminal?” 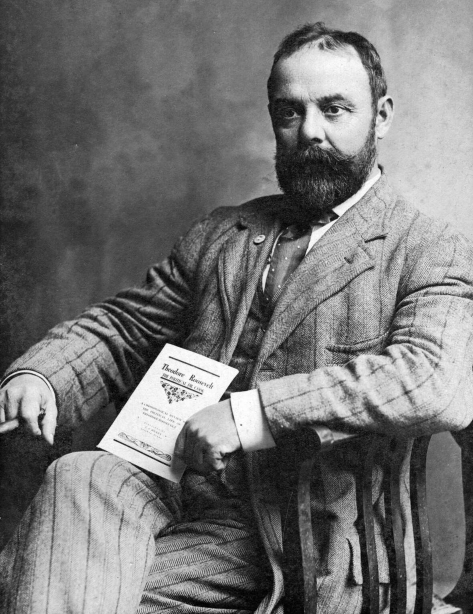 Tom Hickey (right), a Socialist from Texas and founder of The Rebel, dismissed as fabricated a report in the New York Sun that said his lecture at Matteawan to 300 people had led to a riot and stabbing. The paper mockingly identified him as Jacob Startiski and labeled him an anarchist.

Augustus Mosher saved the daughter of the engineer of the ferryboat Union after she fell overboard at Long Dock.

Officer Valentine, “in a moment of exasperation,” knocked down and beat a suspect until bystanders managed to pull the man to safety in a nearby drugstore.

Officer Charles Lucy was shot and killed by a “crazed” resident when answering a call on North Street. In the days that followed, the police cracked down, detaining a World War I veteran who suffered from shell shock on charges he had annoyed a woman and arresting an Italian immigrant on North Chestnut Street for possession of a loaded revolver. The Poughkeepsie Eagle-News reported that residents were also especially vigilant, “keeping tabs on town characters” they judged potentially violent. At the same time, a guard was placed outside the home of the killer to prevent any more items from being removed as souvenirs.

The city commissioners approved spending $35,000 to repair the dam.

Police were searching for a man who sold all the family furniture for $30 before disappearing two weeks before the birth of his youngest child.

The Board of Health issued a warning about swimming in the Hudson River because of the risk of typhoid.

On the advice of his physician, a 42-year-old widower surrendered to police for treatment as a morphine addict. He said he became hooked while working as a young man at a pharmacy. When told he would be committed to jail, he said, “I guess that will be the end of me” but was reassured by his doctor.

Two sheriff’s deputies found a 9-foot square, brittle, iron-like substance in a 10-foot-square hole in a remote area near Mount Beacon, which the Poughkeepsie Eagle-News suggested might be part of a meteor.

A 65-year-old Department of Public Works employee died after falling from a dump truck on Grove Street.

A counselor at Camp Beacon was diagnosed with diphtheria. 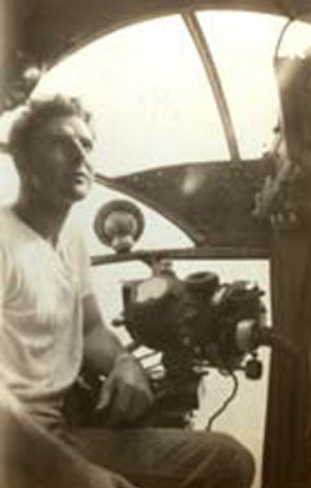 Francis Peattie sits in the nose of a B-17E with a bomb sight during a combat mission in 1943. (Photo by Jose Holguin)

The firefighters at Tompkins Hose dedicated a plaque honoring Lt. Francis Peattie (right), a member of the company who had been missing in action since June 1943. [Peattie, a bombardier, was killed when his Flying Fortress crashed in the South Pacific. Through the efforts of the lone survivor of the crash, Col. Jose Holguin, Peattie’s body was identified and returned to Beacon in 1985.]

Conrad Nagel, who in 1940 received an honorary Academy Award, appeared for a week in Petrified Forest at the Roosevelt Theater with his estranged wife, Lynn Merrick, star of A Close Call for Boston Blackie, Voice of the Whistler and other films. That was followed by a week with John Carradine in Rain, based on a novel by Somerset Maugham, and a week of Miriam Hopkins in There’s Always Juliet.

Tommy Hopper, 17, won the qualifying round in the first Poughkeepsie Junior Golf Tournament but lost in the final to Lido Lucarini, 16, the defending Dutchess Amateur champ.

Police investigated a complaint by Pink Waters, of River Street, that a man shot a gun from a window.

A 40-year-old housewife was fined $15 for disorderly conduct after she used abusive language at police headquarters and threw her shoe at the desk sergeant.

The Penn Central Railroad offered to lease the city a former waterfront dump for $1 a year if it made the parcel into a commuter lot.

A 15-year-old girl died in a fire at her Rombout Avenue home. One of her older brothers was among the volunteer firefighters who responded. Her father and three other siblings escaped.

The Planning Board approved plans by the Chemprene Division of the Richardson Co. to construct a 150,000-square-foot plant on Fishkill Avenue at the site of the former Matteawan State Hospital.

Police Chief Warren Hughes said there had been 21 burglaries in June and 23 in July, or nearly half the number reported in all of 1971. He suspected most were “committed by youngsters to support a drug habit” because 75 percent happened during the day, which was not the modus operandi of professionals.

A fire destroyed a vacant building at 288 South Ave. that had been the site of the Misericordia Novitiate. The assistant fire chief said there had been a problem when firefighters connected lines to a hydrant on the former convent grounds and another on South Avenue only to find they were connected to the same main and drawing water from each other.

A year after the start of construction, the developers of the 123-unit Davies South Terrace Apartments opened a rental office. Priority was given to families displaced by urban renewal.

The building inspector ruled that apartments at 65, 67, 69 and 71 Main St., all owned by the same landlord, were unsafe and ordered them closed. Six families were displaced. The apartments lacked smoke detectors, were infested with roaches and had blocked exits and holes in the floors and walls; the tenants said they could not afford anything better.