Residential composting pilot programs introduced in Beacon and Philipstown in the spring have been so successful that organizers plan to extend them at least through the end of 2023.

“Every municipality should be doing this, but it does take a cultural and behavioral shift,” said Jason Angell, a Philipstown Town Board member. 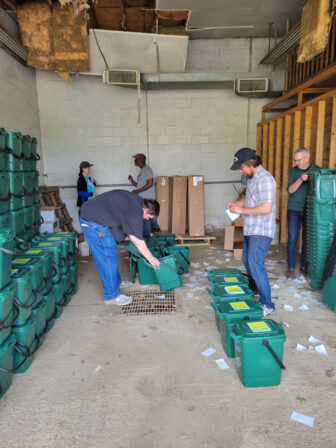 In addition to reducing methane gas emissions, which contribute to global warming, composting turns food scraps and yard trimmings into a potent, marketable soil additive that removes organic waste from incinerators and landfills.

The effort in Beacon was spurred by a City Council advisory committee that made composting a routine for 450 households.

“Right place, right people, right time,” said Sergei Krasikov, the chair of the city’s Conservation Advisory Committee. “The steady pace of adoption was amazing. At first, the bins [at three drop-off spots] were a quarter full, then half, and the way the levels kept rising every week speaks to the untapped potential.”

Volunteers baked cookies to express their gratitude to city employees who helped with signage and installed fencing at the sites.

So far, the Beacon project has removed 30,000 pounds from an annual waste stream of about 3,500 tons, not counting recyclables. The advisory committee would like to expand the program to include schools, businesses and restaurants, and the city is negotiating with the carting company which hauls away the scraps to add another drop-off spot.

“The dream would be curbside pickup,” said Krasikov. “People are ready to compost, especially if we make it convenient.”

To register for food scrap recycling, visit Philipstown Town Hall, 238 Main St., in Cold Spring, weekdays between 9 a.m. and 3 p.m. to purchase a startup kit for $20 (checks only). It includes a pail, a transportation bin and 25 bags. The kit will allow the town to measure impact. Drop-offs can be made each Saturday at the Philipstown Recycling Center on Lane Gate Road. For info, email [email protected].

Look for the green-lidded bins at the Churchill Street parking lot, near the play area at Memorial Park and at the Beacon Recreation Center, 23 W. Center St. For information, email [email protected].

Beacon’s achievement, along with composting experiments in Rhinebeck and Red Hook, attracted the attention of the Dutchess County chapter of Mothers Out Front, a national organization that lobbies legislatures to fast-track composting when formulating solid waste plans for the next decade.

In October, the Beacon City Council passed a resolution calling on the county Legislature to study the feasibility of a composting facility for county-wide use. At the moment, Dutchess officials lean toward skipping a feasibility study and instead adopting a decentralized system, said Kerry Russell, the county’s deputy director of solid waste. A decision is expected next year.

Elsewhere in the state, Greene County recently bought a $160,000 machine that produces a compost-like product in 24 hours. Columbia County plans to do the same, and also has installed nine drop-off spots. In Ulster County, a public facility has been composting since 2012; it costs taxpayers nothing and won a national award in 2021.

The Putnam County Health Department has aided composting by offering $70 bins to backyard practitioners. Filling a void in Philipstown, volunteers and town workers implemented a residential composting project in early 2022.

“The people wanted it, the politicians said ‘OK,’ and everyone got behind this,” said Karen Ertl, who lives in Garrison and was among the organizers. “Without that buy-in, it would’ve been just a nice idea.”

So far, 157 participating households are on pace to remove 10 tons from the municipal waste stream in the first year, she said. As in Beacon, organizers would like to expand the program to businesses, restaurants and home pickup.

“People tell us that it makes them more aware of what they’re throwing away,” said Ertl. “A large part of what we’re doing is education. The garbage is generated anyway, so we’re trying to turn this into a no-brainer.

“Our carter is in Connecticut, so we’d love to create a chain where one truck-run comes to pick up from the [larger] area,” to save fuel, she said. “We’re continuing to grow and looking for ways to be creative.”

Albany’s carrot of grants and stick of statute are having an impact with larger producers. Enacted this year, the Food Donation and Food Scraps Recycling Law requires firms and organizations that discard at least 2 tons of food waste each week to donate edible items and bring scraps to a commercial composting site, with some exceptions.

To foster municipal composting projects, the state Department of Environmental Conservation is distributing $2 million in grants through May 2024, or until the money runs out.

Philipstown funded its $460 monthly carting fee for hauling away collected scraps for composting with a $10,000 grant from NYSERDA, the state energy research and development agency. Next year, the town will pick up the cost.

These trickle-down and bottom-up efforts will eventually converge in the middle as composting becomes more mainstream, especially when officials realize that “black gold” can pay for itself, advocates say.

“What other business gets its source ingredients for free and then sells the product, which is in high demand?” asked Angell. “Forward-thinking municipalities should consider startup costs as an investment in creating a budget-neutral program that also helps the environment.”