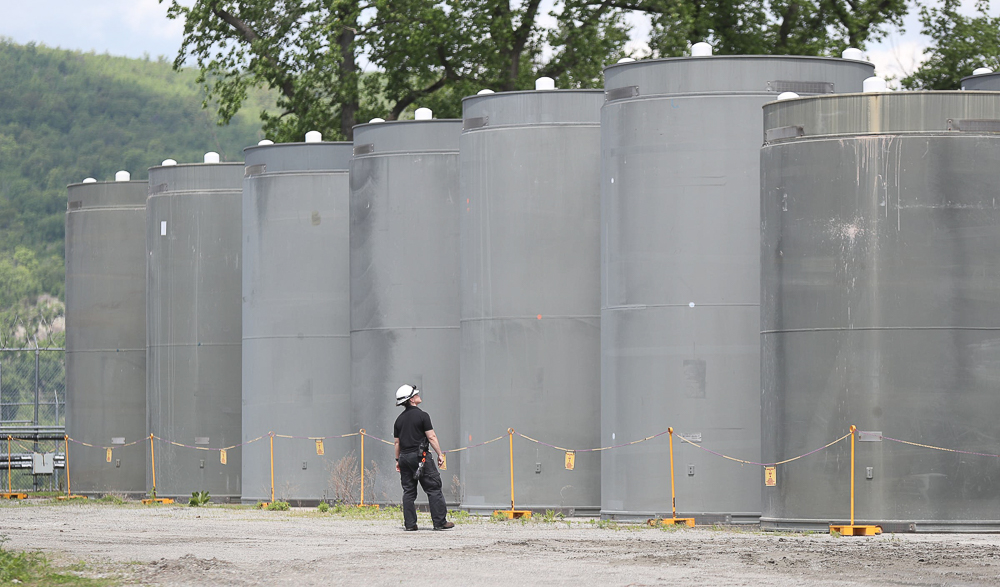 By 2024, a Florida company is scheduled to have finished moving radioactive fuel rods from the shuttered Indian Point nuclear plant south of the Highlands to 125 concrete-and-steel casks stored outside.

The long-term plan is to move the casks to a permanent storage facility somewhere other than the Hudson Valley. But a representative of the U.S. Department of Energy said at a Dec. 7 meeting of the Indian Point Decommissioning Task Force that the agency expects the casks to remain where they are into the 2030s.

Indian Point is not unique in this. More than 70 nuclear plants across the country store their spent fuel on-site because the U.S. government has not made good on a 1998 promise to build a storage facility. Its first attempt, at Yucca Mountain in Nevada, ran into legal, operational and cultural challenges, at the cost of $9 billion in settlements to the owners of nuclear plants with stranded fuel.

To avoid further judgments, the government is searching for communities willing to take the fuel temporarily, meaning the sites would not have to be as robust as permanent ones that need to keep the fuel rods isolated for at least 300,000 years. Erica Bickford, the Energy Department representative, referred to the process as “consent-based siting.”

Even if interim sites are identified, the operation to move the waste from dozens of nuclear plants would be unprecedented. It’s expected they would be modeled after U.S. Navy procedures to transport spent fuel from nuclear-powered submarines and aircraft carriers.

The Florida firm, Holtec International, is awaiting approval to build its own interim storage site in New Mexico, although Bickford said that a privately owned facility would be “a highly unusual circumstance.”

Sandy Galef, a member of the state Assembly who sits on the decommissioning task force, and whose district includes Philipstown, said at the Dec. 7 meeting that she had an idea why Holtec wants to take on the burden of storage.

“Do you have a financial interest in that place?” she asked Rich Burroni, a Holtec representative, referring to the proposed facility in New Mexico.

“So you would prefer to have it go there, instead of a Department of Energy-type place that would be a public place,” she said. “You’d lose money on that deal.”

This past summer, state and federal officials visited Indian Point to explore routes that the casks might take out of the Hudson Valley. The transport would be done by railcar, but the fuel still would need to get from the plant to the tracks.

One possible route would move the casks by truck to Newtown, Connecticut, where they would be loaded on cars on the Housatonic Railroad, which is being used to ship low-level radioactive waste to Texas.

However, that route would be the longest, at 57 miles. Shorter routes present their own challenges. Three options (Hopewell Junction, Peekskill and Croton) would require transporting the fuel along Metro-North lines. Another option would be to move the fuel through Beacon and over the Newburgh-Beacon Bridge to reach the CSX Railroad on the Newburgh waterfront. Alternatively, the waste also could be transported on the Hudson River by barge to waiting railcars.

The next meeting of the Indian Point Task Force is scheduled for Feb. 2 and will focus on the options for the disposal of the radioactive wastewater in the spent fuel pools. Galef will no longer be on the committee; she will retire next week after 30 years in the Legislature.