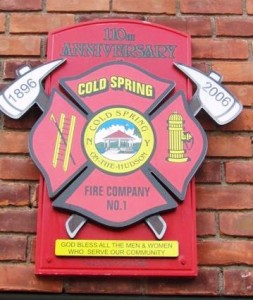 CSFC Coat of Arms commemorates their 110th anniversary in 2006

Recruiting volunteers is a constant challenge

The Cold Spring Fire Company (CSFC) is distinctly different from the other local fire departments in some respects, but the number one challenge it faces – apart from actually fighting fires – is the same: the task of recruiting a steady stream of volunteers to fill its ranks. “The main thing that the public needs to know is that we need members. We can never have enough,” said CSFC president Mike Bowman, a seven-year veteran. “There has been a trend nationally since WW II – a decrease in the number of volunteers in community organizations. It’s not just fire departments – it’s service clubs, everything.” Steve Etta, a 41-year CSFC veteran has seen that decline first hand. “At one time we had 260 members,” he said, pointing to one of many historic photographs that cover the walls of the Main Street fire hall. “Now we have 124.” Etta said that 42 of those members are actively involved in fire fighting duties.
CSFC, along with the Garrison, North Highlands and Continental Village fire departments, was strongly criticized recently in a report  commissioned by the Town of Philipstown and conducted by consultant and veteran firefighter Ron Graner. The fire company has also been embroiled in other controversies during the past year – including an ongoing dispute with Cold Spring Mayor Seth Gallagher over who should have keys to the fire hall and what was at times a raucous public debate over the twice-daily testing of CSFCs siren system. Bowman takes it all in stride and even sees a silver lining. “The biggest thing that came out of this past year”¦was the number of people who realized for the first time that we’re a volunteer department. When we get up at three in the morning to go to a fire there’s not much in it for us other than the gratification. And we still have to get up in the morning and go to work.” 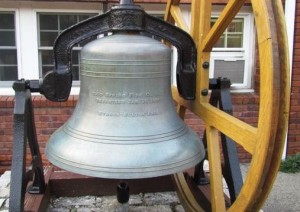 He dispels a common myth – that commuters aren’t part of the all-volunteer company. “I commute to Poughkeepsie. Chris Tobin commutes to Croton. Steve Etta commutes to Patterson. There may not be many firefighters hopping on the train to Manhattan but we all commute – almost no one works in Cold Spring,” he said. That makes fires and other emergencies that occur during the day difficult. Bowman has at least a partial solution in mind. “Maybe Village employees could be allowed to answer calls. Right now they aren’t allowed to.”
CSFC differs from the other local fire departments in terms of its location, organizational structure and funding. It works out of the only “main street” fire hall in Philipstown although that could change if it moves to the former Butterfield Hospital as part of a larger adaptive reuse of that site – a concept that is being considered by local governments. “The Company as a whole has said we’d like to stay on Main Street if it’s feasible,” said Fire Chief Chris Tobin, an 11-year veteran. Tobin said that the Main Street location helps keep CSFC in touch with the community. “It serves as a community center. Kids drop in here to see the fire engines. We’ve done boot [fundraising] drives right out front of here on Main Street.”
Staying put presents challenges however. “Right now this building doesn’t meet National Fire Protection Association (NFPA) standards,” Bowman said. “The building isn’t adequate but we make it work.” Upgrading the existing fire house would be difficult. “Once you start to renovate, you have to meet those standards,” Tobin said. There are structural problems with the building and old storage tanks under it, the contents of which no one is quite sure of. Space is also an issue, especially as the size of fire trucks has increased over the years. Tobin and Bowman both vigorously disagree with those who have said that a renovated or new fire house would enable vehicles to exit onto Church Street. They say that the turning radius is inadequate. Currently, returning vehicles are backed into the fire house via Main Street, a maneuver that requires stopping traffic in both directions.

Unlike other local fire departments, CSFC operates neither as a fire district nor a fire protection district.  Fire districts such as North Highlands have the ability to tax residents directly for its services. As a fire protection district, the Garrison company is funded largely by the Town of Philipstown. While the Village of Cold Spring contributes to its annual operating expenses, fire trucks and other expensive equipment are a different story. “Beyond safety, financial and fiscal responsibility have been our priority and a great source of pride,” Bowman said. “We don’t go to the village to buy a new truck. Over our 115 year history we have paid for the vast majority of our new equipment through fundraising and our annual appeal.” Bowman said they also try to be as practical as possible. The last truck they purchased replaced two older ones. “We bought a 2009 Smeal. It’s an all-purpose vehicle that carries 2,500 gallons of water, stores our rescue tools for traffic accidents and is a pumper,” he said. “It simplified things from a fire fighting perspective – and it made sense financially.”  Bowman said the new truck also improved fire fighter safety because it features an enclosed cab as required by NFPA. The older vehicles didn’t meet that standard. CSFC also receives revenue by contracting to provide fire protection to the Village of Nelsonville and part of the Town of Philipstown – along Route 9D north and south of Cold Spring. 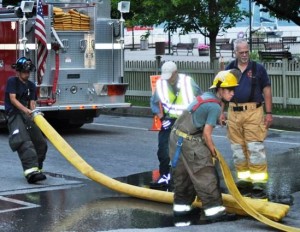 Firefighter safety is accomplished primarily through training.  While this interview was being conducted, CSFC firefighters were in the midst of a National Incident Management System (NIMS) training session. NIMS training was mandated by the federal government after the September 11, 2001 terrorist attacks on the World Trade Center. All first responders as well as local municipal leaders are required to take the program. The need for safety may be obvious, but the hazards are real. “The basic training I took talked about fatalities in volunteer fire departments,” Bowman said. “Firefighters have been lost in Putnam County. It’s not unheard of. As one of the trainers put it, ‘The fires are just as hot in Cold Spring as anywhere else.'” He said New York State requires 96 hours of basic training for all firefighters followed by an additional 16 hours of survival training, which teaches them how to safely exit burning buildings up to 90 feet in height. Training includes interior fire fighting, exterior firefighting, fire police which includes traffic control, and communications. 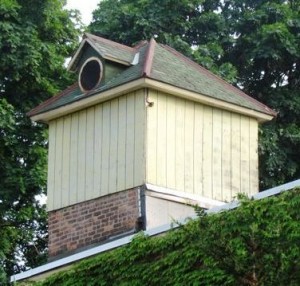 The village hall's cupola was once used for drying fire hoses

CSFC was established in 1896 and Bowman said today its members take pride in that history. “That’s why we have all those pictures on the wall,” he said. One photo features the first “fire hall” – little more than a shed used for storing fire hoses behind what is now Cold Spring Pizza. Also on display are photos of CSFCs 33 fire chiefs. The current village hall also once served as the fire hall. Evidence of that can be seen in the cupola on the roof which was used for drying hoses. In terms of more recent history, Bowman said that Cold Spring’s Community Day and fireworks display began as part of CSFCs 110th anniversary in 2006. “Being part of this fire company means a lot to everyone. It’s a tight-knit group. We train together. We have our disagreements. But when it comes to firefighting everyone here is professional. We’re effective,” Bowman said.

CSFC is organized in two halves – “firematic” and “social.” As president, Bowman heads the social wing. “It’s really a misnomer. It should be called ‘administrative.'” Bowman also serves as a firefighter. Chris Tobin is the current Fire Chief and leads the firematic side, overseeing everything involved in responding to fires and other calls. “The two sides are like a system of checks and balances,” Tobin said. “That way you don’t have one person in charge of the whole place.” Bowman and Tobin both bristle at what they feel has been unjustified criticism leveled at CSFC.  “Our response times are the best in the Putnam County,” Tobin said. “When a call goes in to the central dispatch, we have 10 minutes to respond. If we don’t, a second (fire department) is called in. That has never happened here.”
After the NIMS training, CSFC firefighters shared a pasta dinner. Included in their number were four new volunteers ranging in age from 16 to 22. Perhaps Bowman and Tobin took that as a sign of good things to come. Click here to learn more about CSFC.
Photos by M. Turton

3 thoughts on “Cold Spring Fire Company: Pride in its History”