Every August, tens of thousands of people get together to throw tomatoes at each other in the little town of Buñol, Spain. They fling over 100 tons of the fruits between 11 a.m. and noon, according to the official Tomatina festival website. If, to you, this sounds immature and wasteful, then you and I do not belong in the same kitchen together come late summer. Because I am in need of a little tomato catharsis right about now. 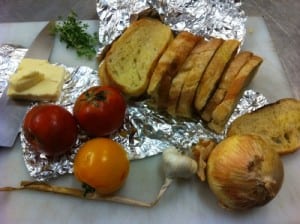 Ingredients gathered for the end of tomato season. Photo by C. Barbour

Although my CSA unloaded a mere 7 pounds of tomatoes on me last week, it could just as well have been a Spanish dump truck’s worth for all that I knew what to do with them anymore. I have already reveled in tomato-garlic-basil salads, tomato-avocado-quinoa-and-cilantro salads, and tomato mozzarella salads; I have had tomato sandwiches (plain and with cold cuts), cold tomato soup, and warm, fresh-tomato pasta sauce; I have roasted, simmered, sautéed, seeded, peeled and pureed them. I have eaten tomatoes with my eggs for breakfast. At this point, I feel that I am very well acquainted with tomatoes.

My summer didn’t start out this way. Back in late July, when the first longed-for beauties started showing up at the Four Winds Farm stand at the farmers’ market, I actually woke up early — early! on Saturday! — in order to get there before Jay sold out. That first week, his tomatoes were gone by 10 a.m. But as the weeks wore on, excitement dimmed to familiarity, and then — well, I don’t think I could ever bring myself to feel actual contempt towards a tomato — perhaps “lassitude” is a more accurate word.

It occurs to me that the trajectory of my affections might align me with people I am not necessarily proud to be identified with. I have often rolled my eyes at people who scramble to get into the latest, hottest, most-talked about restaurant or club, and then, four months later, wouldn’t be caught dead there, the place is so over. But it turns out that I am every bit as fickle! I am mad for tomatoes, and then — la-di-dah, ho-hum, yawn. Tomatoes? Sorry, I’m ready for the next thing. 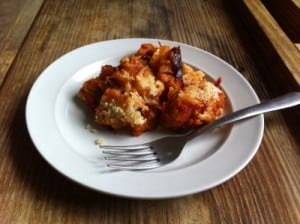 Or maybe that’s unfair. Maybe my love for tomatoes is more like my love for dear friends whose company I adore, though not if they were to hang around in my kitchen for three months straight. And yet, no matter how much I grew to resent them, I would never wish them any harm. Likewise, I would find it difficult to lob a tomato at even my least-favorite co-worker, out of respect for the fruit, not the person.

At any rate, I have been thinking about ways to stash away tomatoes so that in a few months, when I miss their lovely company, I will be able to avail myself of it. Canning and freezing are both options I’ve explored. But today I was in the mood to make something luscious and substantial, so I cut up some stale bread, picked a handful of thyme that was beginning to flower, and made a savory bread pudding. Into it went all the scarred and bruised tomatoes that were in danger of rotting — some 8 pounds of them in all — with the worst bits cut away. I made one to freeze and another to eat now, because I was already starting to get nostalgic at the thought of tomato season coming to an end.

Serves 6-10, depending on what else is for dinner

One thought on “Mouths to Feed: A Tomato Skirmish”