I drove across the country last week, something I’d never done before. I had a friend with me, and a purpose: I was picking up a car in Seattle and bringing it back here, to reside in Philipstown for the foreseeable future.

The cross-country drive is an iconic trip — a trip everyone imagines taking at some point in their lives. Which may be exactly why it is so difficult to plan. How long should it last? Which route is best? Should we follow back roads or interstates? The former are surely prettier, but can easily double the time you spend sitting in the car — and, when Google Maps informs you that the drive will provide you with 45 hours of car-sitting time, minimum, who really wants to work in more of that?

In college, I had a friend who attempted the trip solo without stopping. Midway through his second all-nighter, a dancing bear crossed the highway, and he thought to himself, “Oh, there goes Bobo, the dancing bear,” and then, immediately, “I need some sleep.”

Anne and I spent six days, slept nightly, and hallucinated no bears. And although we did not get everything right — we wished we had taken time out to visit the Corn Palace, for example — we aced the food.

Which might seem odd, considering we ate in a restaurant only once, treating ourselves to a “fancy” dinner that was hands-down the most disappointing meal of the trip. The rest of it was mostly car food, supplemented by the free breakfast buffets in our hotels. 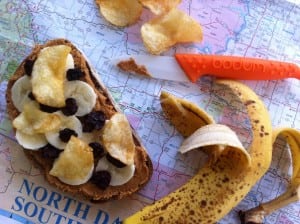 A sandwich for the road

In my 20s, I imagined that America was dotted with small cafes run by people who woke up each morning to cook from scratch the dishes they’d be serving that day — things like pie (lots of pie), biscuits, tomato soup, chicken-fried steak, and grilled-cheese sandwiches. But that fantasy faded long ago. I now know that eating homemade restaurant food is possible only if doing so is the sole agenda of your trip, as it is for Jane and Michael Stern, authors of the Roadfood series.

Though we are both fairly food-obsessed, Anne and I are old enough to have no illusions about good meals appearing magically along the interstate.

We have also lived long enough to know that a body’s energy is a fragile thing, easily disturbed by too much of the wrong foods and too little of the right ones. We have discovered that deliciousness is not necessarily a precursor to happiness. And we understand that our digestive systems matter — and are able to discuss them with near-geriatric chutzpah.

And so, in Seattle, Anne bought a bag of groceries, including a loaf of Dave’s Killer Bread, the best supermarket bread I’ve ever eaten (and, sadly, not sold anywhere east of Utah), a tub of freshly-ground peanut butter, some seedy crackers, a few oranges and lots of apples, a wedge of aged Gouda, a handful of Lara bars, and a box of extraordinary frosted whole-wheat shortbread cookies. I brought with me some walnuts, apricots, almonds (gifts from a friend) and a multitude of chocolate bars.

We filled a cooler with ice, which we replaced daily from our hotel’s ice dispenser. From the hotels’ inevitable breakfast buffets, we pilfered bananas, setting them on the dashboard to ripen.

Every day for lunch, we had open-faced peanut-butter-and-banana sandwiches, layered with potato chips for salt and crunch, and sprinkled with dried fruit. Afterwards, we would share a crisp, cold pink lady apple, and then consume a piece of dark chocolate, followed by another, and perhaps a third. At teatime, we had apricots and almonds, or oranges and walnuts.

We spent our stops walking or swimming, rather than sitting and eating. I never once got that woozy, blown-out feeling that had been such a familiar part of previous road trips.

For the most part, getting old is no fun. But every once in awhile, I realize that some little piece of wisdom I’ve acquired actually makes me happier than the wild-eyed irresponsible craziness that I used to think of as fun.

I crossed the Bear Mountain Bridge last Monday feeling clean, lean, and bright-eyed, happy to be home but also impatient to do it again — this time with my family. They have no use for my old-lady wisdom, but they do like a good peanut butter sandwich now and then just the same.

A Sandwich for the Road

A map of the states you’ve already passed through makes an excellent tablecloth. Do remember to pack a knife, and some baby wipes for cleaning up afterwards.

1 or 2 slices bread, preferably nutty or seedy, which seems to keep better

Spread the peanut butter on the bread. Lay the banana slices over it. Sprinkle with the dried fruit. Top with the potato chips and the second slice of bread, if desired.