Things are not always what they seem, and usually they’re more than what’s readily apparent.

Take Indian pudding, a truly native (lowercase n) American dessert and “Indian” (or capital N, Native American) only in that it is made from a New World staple — corn — instead of wheat or some other Old World grain.

It’s also known as Hasty Pudding (despite the fact that it is cooked “low and slow,” i.e., at a low temperature for a lo-o-o-o-o-ng time, up to five or six hours in some traditional recipes), and its nearest culinary progenitors are British steamed puddings — sweetened milk and grain porridges — that achieve a smooth pudding-like consistency only through long, slow cooking.

The molasses that is Indian pudding’s distinctive sweetener and base note (rather than the more expected maple syrup) also comes to us by a curiously circuitous route, returning to the New World pantry as a result of the so-called “triangle trade” in which sugar from the American South and Caribbean was shipped north or to England for processing into rum (barter for the slave trade). The molasses, a byproduct of the distilling process, was shipped back to the colonies, becoming a much-used culinary sweetener (primarily in baking, but try to imagine Boston baked beans without it).

Like its British cousin, Christmas pudding, Indian pudding is traditionally seasoned with ginger, nutmeg and cinnamon. Admittedly, the resulting brown mess is not much on visual appeal and can be a hard sell to unadventurous souls unaccustomed to its charms, but its allure lies somewhere near its savory Italian relative, polenta, in that it is true comfort food. 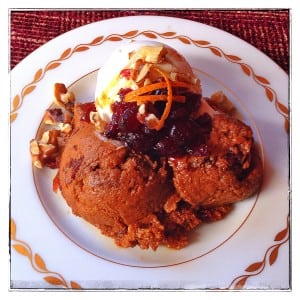 And even I will cop to a shocked “My-God-what-have-I-done?” hesitancy when first removing this questionable brown mush from the oven. When topped with a generous spoonful of freshly whipped cream, or better still some good vanilla ice cream, Indian pudding is a dessert that holds its own against even the most sophisticated festive spread.

On a cold winter night, a warm oven loaded with this exotically spiced mixture fills the house with a fragrance that virtually sings Yule carols on its own. (Nov. 13, National Indian Pudding Day, might seriously be considered as the true opening salvo of the holiday season.)

For the version presented here, I’ve used both a higher proportion of maple syrup to amplify the strictly New England character of the dish and a touch of vanilla to soften the edges of the comparatively “rough” blackstrap molasses. Preliminary cooking on the stovetop and the inclusion of beaten eggs helps to achieve a smooth, more custard-like consistency.

A simple cranberry sauce provides a tart brightness and some additional holiday color. You might consider stirring a cup or so of dried cranberries, raisins, currants or other dried fruit into the pudding after two hours or so into its time in the oven for additional interest; any sooner and they pretty much melt into the mix. Toasted walnuts add a little toothsome crunch.

Preheat oven to 300 degrees. In the oven, warm 1 to 1 ½ inches of water in a shallow roasting pan large enough to accommodate a 6-cup casserole or soufflé dish. Butter the casserole/soufflé dish and set aside.

Mix dry ingredients and reserve. Warm milk, syrup, molasses, vanilla and butter in a medium saucepan over medium-low heat. When warm, increase heat slightly and begin to whisk in the dry ingredients until completely incorporated and lump free. Cook, stirring regularly over a low simmer (as for polenta) for 10 minutes or so.

Remove from heat and slowly whisk in the beaten egg. Pour mixture into buttered casserole and set it into the warm water bath in the oven. Cover lightly with foil and cook for at least three hours, checking occasionally to see that it doesn’t get too dry.

While pudding cooks, prepare the sauce: Combine cranberries, orange juice, sugar and zest in a small saucepan over low heat. Cook for 15 minutes until sugar is dissolved and cranberries begin to soften. When slightly thickened, remove from heat and cool. Stir in about half of the walnuts.

Once pudding is done, remove from oven and cool slightly. To serve, allow one large scoop of pudding per person. Top with one or two small scoops of ice cream or a dollop of whipped cream, finished with a generous tablespoon or so of the cranberry sauce and an additional sprinkling of walnuts.