As summer draws near, residents of Dutchess and Putnam counties are hitting the trails throughout the Hudson Highlands with wild abandon, soaking up the sunshine and getting back to nature. But for some residents, the good times may be coming to an end.

This summer, Scenic Hudson is scheduled to turn over stewardship of the trails they currently maintain on Fishkill Ridge and Mount Beacon to the New York State Parks Department, eliminating some of the confusion as to who is responsible for which patch of land throughout the Highlands.

“It’s a bureaucratic nightmare up there,” noted David Rocco, who led the volunteer efforts to restore the Mount Beacon Fire Tower. “You start at the bottom and you’re in the city of Beacon. You go halfway up and suddenly you’re in Fishkill. Then you start passing back and forth between Scenic Hudson land and the state’s land. And Scenic Hudson doesn’t have police authority.” 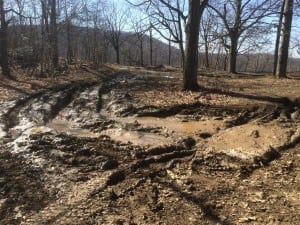 Scenic Hudson may not have police authority, but the New York State Parks Department does. And they plan on using that authority to invoke a long-standing law that’s been loosely enforced in the past: the forbiddance of Jeeps, ATVs, and other off-road vehicles on the trails that traverse Mount Beacon and Fishkill Ridge.

As The Paper has reported over the last few weeks, the issue of off-road vehicles on the mountain has been a thorny one for quite some time (see Tracking Danger But Trailing Behind [April 17] and Fire and Rescue on the Mountain [April 24]). On one hand, state laws clearly forbid the use of such vehicles on the mountain. On the other hand, off-roaders have been traveling the trails for generations, and have been instrumental in clearing the mountain of trash and taking part in such civic projects as the restoration of the fire tower.

With the cities of Beacon and Fishkill as well as the NYS Parks Department planning on stepping up enforcement of the law this year due to increased vehicular traffic, many hoped that some sort of compromise could be reached to allow exceptions for those who use the trails responsibly.

“We can’t alienate the Jeep clubs until we need their help,” noted Antony Tseng, who has worked with the clubs as a member of both the Beacon Volunteer Ambulance Corp and the group that restored the fire tower. “There’s got to be a middle ground in there somewhere for everyone to get along and know the rules.” Rocco hoped that some sort of program could be put into place in which a limited number of off-roaders could be given legal access to the trails via some sort of permit system, although he noted that the system would be difficult to enforce. 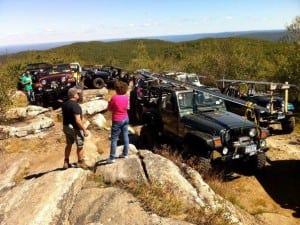 “Illegal ATV use has a negative impact on trails in the parks, and Park Police actively enforce regulations that prohibit their use,” he said. Although some New York State parks offer limited access to off-road vehicles, such as some of the seaside parks on Long Island, Simmons said the two situations are not comparable. “We issue permits to four-wheel-drive passenger vehicles to allow people to access beach areas for fishing and other recreational activities. Permit holders are traveling relatively short distances at very slow speeds, and then park their vehicles at surf fishing locations.”

When asked if the Parks Department would consider either constructing new off-road trails somewhere in either the Hudson Highlands or Fahnestock State Parks, or officially designating certain current trails as multiuse trails, Simmons said that the opportunity for such considerations had passed.

“The designation of ATV trails were not included in the 2010 master plan for Fahnestock and Hudson Highlands State Park, which was adopted following ample opportunities from the public to participate in shaping the plan,” he said. Simmons declined to answer if the master plan was due to be revised any time soon, or if there would be a similar forum in the future.

In fact, the adopted master plan calls for increased policing of the trails in order to specifically forbid the use of such vehicles. “Although these vehicles are not allowed in state parks, there is evidence of damage to natural systems that shows their use both on and off existing trail networks,” it states. “Increased enforcement will prevent further damage to natural communities and allow them to recover.” The plan also advocates letting certain double-track trails, which are currently wide enough to allow passage of off-road vehicles, grow back in to a reduced width of 18 to 30 inches across, rendering them impassable for drivers.

With increased enforcement on the horizon, it’s unclear who will step up to be an advocate for responsible, legal multiuse of the trails that have been driven by Beaconites since the casino, incline railroad and ski resort — all long since gone — established Mount Beacon as the crown jewel of the Hudson Highlands. Also unclear is if they would even be listened to.

“I’ve tried to create a ‘Friends of Mount Beacon Group,’ but every time I do, all the overlapping groups like the New York–New Jersey Trail Conference, Scenic Hudson and the Hudson Highlands Land Trust say, ‘Don’t worry. We’ve got it under control,’” said Rocco.

7 thoughts on “The End of the Road”