Wash boats to stop the spread of invasive species

In the Aug. 28 edition, Roots and Shoots described how a nonnative plant, water chestnut, had settled in the river and how its presence has altered the ecosystem. Here’s more about its impact.

I came across Dan Shapely through a blog post he wrote about the Great Hudson River Fish Count, an annual event that this year netted 35 species and nearly 3,000 fish from the river on Aug. 15. What does abundance look like in the river? We don’t even know at this point. Our perspective is completely skewed.

Shapely said: “It’s an easy to answer question — fish are at distressingly tiny levels compared to historic levels, but it’s all relative. In the 1980s fishing was good, but that was miniscule relative to the levels in the 1940s. The assumption is that they are declining.” He compared the impact of water chestnut on fish as being in a room where all the air is sucked out.

Like all plants, water chestnut uses photosynthesis to turn sunlight into energy and release oxygen. Water celery, the native aquatic plant that has been displaced by water chestnut, releases oxygen into the water. Water chestnut releases it into the air, depriving anything that has ventured into its dense vegetation of both sunlight and literal breath. 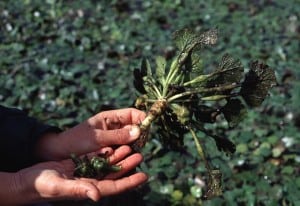 Water chestnut rosettes lie on the water’s surface, and the flexible root is long enough that it can grow in water up to 16 feet deep.

This could lead to mass die-offs of fish. Shapely said, “Just this spring in New Paltz in the Wallkill river, a tributary of the Hudson, there was a low-oxygen condition and a mass die-off of carp.” Since it has been in the river since the early 1900s, the complete picture of water chestnut’s impact on fish levels can’t be completely understood.

Dr. David Strayer, freshwater ecologist with the Cary Institute of Ecosystem Studies, said, “There were probably major declines in fish populations because of water chestnut, but no one was looking at it before the 1950s or ’60s.”

There are some gray areas when it comes to invasive species, though, and Strayer has identified one really important role that water chestnut plays. It cleans up pollution in the river. Strayer said: “Bacteria use nitrate instead of oxygen for respiration, convert it into gas, an environmentally harmless material. This occurs only where there’s a lot of organic matter and no oxygen. There’s a significant amount of denitrification going on and cleaning up pollution.”

Nitrogen and phosphorus are important nutrients in a river, just like they are in a garden. “They make things grow faster and are sometimes good and sometimes bad. The Hudson has more per acre coming in than any other estuary in the U.S. It comes from sewage, fertilizer, air — high-temperature combustion like cars and power plants. Rainwater has nitrates in it. Those three sources end up in the river in pretty high concentrations,” Strayer said. His point was not that we should plant water chestnut in polluted water, but that we should study and understand what we’re dealing with to make the best decisions about what to do with it.

At this point, the water chestnut beds we see in the river around Constitution Marsh and Denning’s Point are here to stay. In places where recreation is impacted, mowing is an option to keep channels open for boats. Nava Tabak, a conservation scientist with Scenic Hudson, said, “It’s something that in partnership a lot of conservation organizations are monitoring, and we haven’t found a great solution to eradicating it or controlling it.”

Boats are one source for spreading water chestnut and other invasive species. The spiny seeds can cling to the hulls. Locally, Hudson River Expeditions outlined the precautions they take to clean kayaks after use. Joe Marigliano, one of the managers at the Cold Spring boathouse, said: “You can see the dots that stick to your boat if they dry on it. We spray the boat with a hose, get the loose dirt off and use an organic cleaner, Basic H from Shaklee. It’s just like washing a car — rinse, wash, rinse, air dry.” The Department of Environmental Conservation also has a section on their website about aquatic invasive species and boat washing (dec.ny.gov).

Shapely, who works on protecting and restoring the Hudson River every day, sees a brighter future as a possibility, in spite of the challenges. He said: “The exciting part of it is that if we get some things right — fishery policies, habitat restoration, cleanup — it would transform the culture of the river valley just as the farming movement is transforming the culture. It will take quite a few years or decades, but it will be transformative.”

Water chestnut rosettes lie on the water’s surface, and the flexible root is long enough that it can grow in water up to 16 feet deep.