More than 100 restless Democrats and progressives filled the basement of the Desmond-Fish Library in Garrison on Jan. 8 to express concern over the presidency of Donald Trump and a Republican-controlled Congress.

U.S. Rep. Sean Patrick Maloney and state assembly member Sandy Galef, both Democrats, spoke for the first two hours of a three-hour session in which every chair was filled, forcing some participants to stand, while another 25 to 30 people remained upstairs. 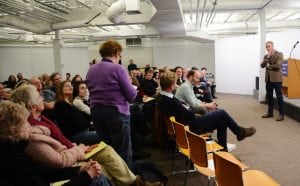 Rep. Sean Patrick Maloney listens to a question during a Jan. 8 forum at the Desmond-Fish Library. (Photo by L.S. Armstrong)

The “Forum to Discuss the Potential Impact of the Trump Presidency” was organized by Eric Stark, a Garrison resident who curates the art collection at the New School in New York. Stark told The Current that he saw “the urgency in getting right to it” opposing Trump’s agenda.

“When you see the storm coming, it’s a good time to start filling sandbags,” he said. “We need to be vigilant.” Stark said he sought out Maloney and Galef because he wants to know their plans for countering Trump. “This is very much about what we can do,” he told the gathering.

Maloney and Galef emphasized the difficulty of predicting Trump’s actions.

“I don’t think he knows” what he’ll do because he doesn’t have “any understanding” or “any interest” in policy-making, Maloney said. “Donald Trump is such a weirdo.”

“We don’t know where this president is going,” Galef added. “I’ve really no clue.” 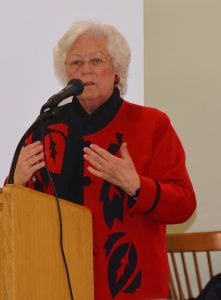 Sandy Galef, who represents Philipstown in the state Assembly (Photo by L.S. Armstrong)

Maloney said he took solace in the fact that Trump “doesn’t have any fixed ideology,” which could hurt his relations with other Republicans and present opportunities for collaboration with Democrats on issues such as family leave and infrastructure revitalization.

But if Trump follows up on his “despicable” campaign tactics and “dark, negative energy,” Maloney said, “I’m not going there.”

If Charles Schumer, the new Democratic Senate minority leader “can keep Senate Democrats together,” he can “essentially stop anything,” Maloney said. “That’s going to be a very important check on this new president.”

The nation’s angst affects him personally, he noted. “As a gay guy, with an interracial family, in a Trump district, I live this tension every day,” he said. Although he won re-election for a third term, most voters in the 18th Congressional District backed Trump for president.

Maloney noted that Republican leaders have talked about terminating the Obama health-care program for years. “The problem is they don’t know what they want to do,” he said. “That’s going to slow them down” although they can still cause a lot of damage, he said. They probably will defund Planned Parenthood. “We might not be able to stop all this stuff.”

Alyssa Miller, from the regional branch of Planned Parenthood, said that if her organization is defunded, the loss of money will “cause a national health crisis.” Not only will women seeking abortions or other reproductive care lose access to services but women of all ages, children, and families will lose medical care, and abolishing the Affordable Care Act will compound the problem, she said.

Maloney said he had conferred with a Coast Guard admiral on killing a proposal to add anchorage spots for oil barges on the Hudson River. “We’re going to whack that thing any way I know how,” he said, expressing confidence that the idea is going nowhere.

Galef was less sanguine. “If you have a president kind of wrapped up in energy companies — oil companies and so on — I’m not sure it’s such a done deal,” she said. “Personally, I’m very nervous about it.”

After Maloney and Galef departed, David Gelber, executive producer of the National Geographic TV series Years of Living Dangerously, advocated action on climate change, calling it “the single biggest problem facing us.” It “affects everything we do. And it hasn’t come up once” all afternoon, said Gelber, who lives in Garrison. “We have to hold them accountable,” he said of Galef and Maloney.

Some audience members spoke in a similar vein about accountability. Nick Angell of Garrison asked Maloney sharply what he would do to stop Trump. “There’s a lot of Democrats in this community who will be following you very closely,” Angell told the congressman, who lives in Philipstown.

After Maloney had left, Stark said: “We need to stay on him. We need to demand” he push progressive legislation, report regularly to constituents in person, and identify Republican allies in Congress “so we can support them,” too.

Earlier Maloney had encouraged such vigilance. “It’s good democracy to have people like me on their toes,” he said.

Maloney asked attendees to push for electoral redistricting to reduce gerrymandering that benefits one party; campaign finance reform; creation of a national service program; and teaching civics. “I can’t tell you how many kids I talk to who say, ‘What’s Congress?’ ” he said. He advised attendees to join organizations working on issues they care about, run for local office and do political organizing. “You’re in a county I’ve never won,” he said. “Start there!”

“Don’t lose hope,” Maloney said. “The shock absorbers built into American democracy are strong enough to contain even this guy.”

2 thoughts on “Progressives See Glimmer of Hope, Despite Alarm Over Trump”