The Highlands Current won four awards among newspapers with circulations of 4,000 or less in the annual Better Newspaper Contest held by the New York Press Association.

The awards were presented on April 7 and 8 at the NYPA convention in Saratoga Springs.

Deb Lucke won first place for Graphic Illustration for The Spirit of Beacon Parade, which appeared in the Sept. 30 issue. The judge called it a “very creative and unique artwork that captures the moment in an original way. Deb Lucke is a very talented artist.”

The Current staff won third place for its coverage of local government for stories by Jeff Simms, Holly Crocco and Michael Turton and two stories by Liz Schevtchuk Armstrong (here and here) on Cold Spring, Putnam County and Beacon issues.

Armstrong won third place for News Story for her report, Putnam Visitors’ Bureau Lost Money in 2015, which appeared in the Dec. 23 issue. The judge wrote, in part, that “the newspaper did diligent reporting and addressed a variety of interesting issues.”

Finally, Anita Peltonen won third place in Spots News Photo for her shot of a firetruck racing through a cemetery (below) that appeared on the front page of the Aug. 19 issue. The judge wrote, “Really nice composition, with the rich, contrasting red and green colors and just a waft of smoke in the background. Beautiful, yet newsy.” 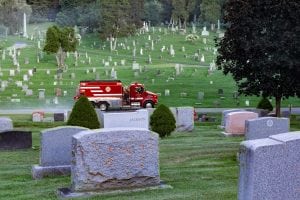 The Current and its predecessor, The Paper, has collected 20 NYPA awards since its first year of eligibility in 2013. The contest, which included nearly 3,000 entries from 184 newspapers, was judged by members of the Washington Newspaper Publishers Association.