No one goes to a garage sale expecting to buy a garage. But in Cold Spring there’s a porch-and-stoop sale taking place in which some property owners on Main and nearby streets will actually buy a porch or a stoop.

Here’s why. Over the decades, predating living memory not to mention zoning regulations, many building owners routinely built a porch or stoop on land within the right-of-way of village streets — property that is owned by the municipality. (On Main Street the right-of-way extends to the front wall of most buildings.)

Increasingly, property owners have asked the village if they can purchase the small strips of real estate under their porches, stoops or landings. The village has been open to the idea chiefly because it reduces the municipality’s liability in the event of an accident. 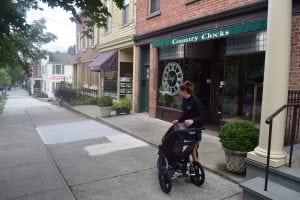 The owners of Country Clocks and Robert McCaffrey Realty have expressed interest in buying the stoops of their buildings (Photo by M. Turton)

The village has sold some tiny parcels in the past but there has been no consistent policy on how much to charge. It is now attempting to establish a uniform rate, said Deputy Mayor Marie Early.

The need to set a standard price became clear when the owners of 178 Main — the former Preusser Realty office now being renovated for River Architects — asked to purchase the village-owned strip in front of the building that measures roughly 40 feet by 14 feet.

James Hartford, one of the principals of River Architects and owner of the building, had the parcel appraised at the request of the village board.  The board thought the appraisal was too low; it set a price of $4 per square foot or $2,240, but agreed to deduct the $1,200 Hartford had spent on the appraisal. 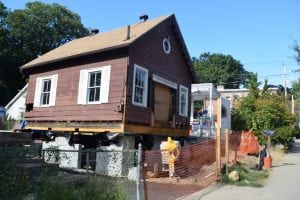 A narrow strip of village-owned land is being sold to River Architects, which is renovating the office at 178 Main St. (photo by M. Turton)

Mayor Dave Merandy told The Current that the $4 per square foot price is fair, and that applying it to similar purchases along Main Street will likely eliminate the need for appraisals. However, the rate has not been formally adopted.

One difficulty with appraising the strips is that there are few comparable properties.

The process frustrated Hartford, who said the village should have set its price earlier, and noting as the buyer he would be paying the real-estate closing costs.

More sales in the works

Others contemplating purchases said they are comfortable with the $4 rate. The Silver Spoon Restaurant at 124 Main and Robert A. McCaffrey Realty at 140 Main have both contacted the village about buying their stoops. Howard Broad, owner of Country Clocks, told The Current he also would like to buy his landing at 142 Main. 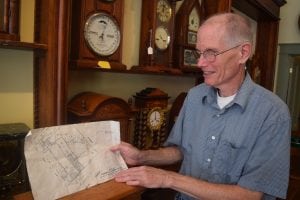 Howard Broad with a 1974 survey showing the property line of his Main Street shop (photo by M. Turton)

“Four dollars a square foot is reasonable,” Bob McCaffrey said. “At that price I’m happy. If it was $100, I wouldn’t be. Most people will do it at that price.”

Broad said his 24 x 6 strip is so small that taxes on the property are not likely to be affected if he buys it. “Four dollars is fair,” he said. “It’s not gold-plated!” At that rate, the purchase price would be $576. Broad noted that several years ago Roger and Elizabeth Ailes, who own the neighboring building at 144 Main, which houses the offices of their Putnam County News & Recorder, purchased its stoop as part of renovations to the historic structure, once home to The Old Homestead Club. 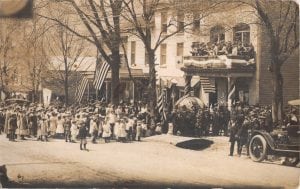 A shot taken in 1914 of the Homestead Club (now the PCNR building) shows the upper porch extending above the right of way. (Photo courtesy Howard Broad)

The issue extends beyond Main Street. Village Clerk Mary Saari said that that when a family on Garden Street recently surveyed their property for renovations, they were surprised to learn the front porch sat within the street’s right-of-way and the land below it was owned by the village, a situation that is likely true up and down the block. Similar situations have been documented on Furnace Street and in the area of B Street and Mountain Ave.

Mayor Merandy said that the village board has not yet considered a price for strips of land on side streets, which, unlike Main Street, are almost entirely residential. 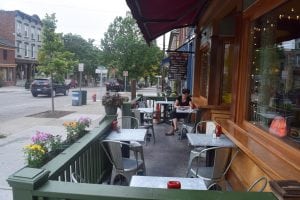 The outdoor seating at the Silver Spoon Restaurant sits on village-owned property. (Photo by M. Turton)