In late September, more than 100 Beacon residents attended the first of two community meetings (the second will be held in November) to provide feedback on the city’s review of its comprehensive plan. The plan, adopted in 2007 and typically updated every 10 years, will serve as a blueprint for development and growth in the city. In a series of articles, The Current will examine aspects of the plan, beginning with the waterfront.

It’s fairly well-known, no matter how long you’ve lived in Beacon, that the waterfront area was not always as it is now.

Once home to brick and hat factories, and for two centuries a hugely popular regular ferry to Newburgh, the Beacon waterfront was a hub of activity for the small industrial city.

By the 1990s, however, industry was long gone and much of the riverfront had become blighted. That began to change in 2003, when Dia:Beacon opened in the former Nabisco factory near Denning’s Point, bringing contemporary art and a new generation of ex-Manhattan and Brooklynites to the city.

In 2007, the Metropolitan Transportation Authority announced plans to create a Transit Oriented Development (TOD) on 18 acres at its Metro-North station. The development would have promoted regional transit and, according to the agency, created a “gateway” that linked the river to Main Street.

But a number of residents, some organized as a group called Beacon Deserves Better, opposed the idea, saying it was hastily planned and would have had a negative environmental impact. In addition, the group argued, without a comprehensive planning process, the development would isolate Main Street businesses rather than connect them to the waterfront.

The MTA put the project on hold in 2010, citing the lack of TOD-friendly zoning and the “right timing and economic conditions.”

Today, public parks and recreational spaces, along with Dia, surround the train station, yet many residents say additional development in the area will benefit Beacon. 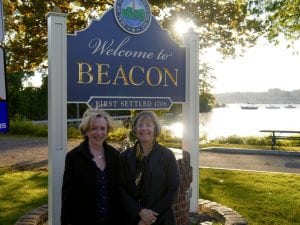 Peggy Ross and Sara Pasti at the Beacon waterfront (Photo by J. Simms)

The comprehensive plan review is not a complete rewrite of the city’s 2007 plan, nor is it a proposal for specific development. Rather, it’s an opportunity, after reviewing how the city has changed over the past decade, to tweak the plan so the city has guidelines that reflect residents’ desires as it considers future projects, explained Noah Levine, an associate with BFJ Planning, the firm hired to facilitate the update. The city previously hired the firm to help create the Main Street-to-riverfront linkage zone that was adopted by the City Council in 2013.

The 2007 comprehensive plan encourages mixed-use commercial development within designated areas, “with attention to architectural design and pedestrian amenities.” Further, it states that development at the waterfront should be related to its unique location and “should not unduly compete” with Main Street businesses.

While that language provided what Pasti calls “broad brush stroke” guidance, it was adopted just months before the 2008 economic downturn. Any plans for riverfront development were set aside.

But now, she said, with the economy recovered and residential growth in Beacon on the uptick, it’s the ideal time to fine-tune the guidelines. “It helps you get more of what you want and less of what you don’t want, so people who develop what we want to see there will come to us.”

She added: “We want to maintain the special value of our waterfront lands, and in light of all the changes that have taken place on Main Street, how do we want to structure it? This is the ideal time for us to take a look at what we want.”

The feedback from residents so far has been consistent in opposing “stand-alone” development at the waterfront, said Levine of BFJ. Rather, they want to see “something that’s harmonious with the existing scale, and that’s complementary to the retail along Main Street.”

Mayor Randy Casale said he typically keeps his personal preference to himself so it doesn’t appear that he’s leading the city’s agenda. But from an economic development perspective, he said, “if there’s one thing we’re lacking, it’s a daytime workforce that would subsidize businesses on Main Street during the week.”

Casale said a mixed-use development might attract tech-based and other businesses, creating a “reverse commute” from Westchester and New York City. That would strengthen the tax base and stimulate the economy while adding critical diversity from the arts and tourism “so we don’t have our eggs all in one basket.”

City Council member George Mansfield has also spoken about the development of commercial office space at the waterfront. He, too, believes a reverse commute is possible and could support the local economy without adding an undue burden on schools, police and emergency responders.

The next step in the process will take place Nov. 17, when the city hosts a second public forum on the comprehensive plan update. The location has not been determined, but residents will be invited to share their opinions on all elements of the plan, including the waterfront. For those who can’t make the meeting, comments can be emailed to [email protected]

Following the second public session, Noah Levine said he expects the updated plan to be sent in late November or early December to the Planning Board for review. The City Council will then hold a public hearing and could vote on the plan early in 2017.