Proposed in response to Philipstown vote

In response to a resolution by the Town of Philipstown that declared itself to be the equivalent of a sanctuary city, the neighboring Town of Kent considered what might be called an anti-sanctuary resolution.

Councilman Paul Denbaum proposed a resolution at the Kent Town Board’s April 25 meeting that he said was necessary because, according to a draft he read from his phone, the “recent action of a neighboring municipality encouraging the safe harbor of illegal aliens who have committed crimes puts the safety of the residents of the Town of Kent in jeopardy.”

The Philipstown resolution, approved on April 6 by a 3-2 vote, states the town will ensure “equal protection” to all residents, regardless of immigration status, and that, unless required by state or federal law or a court order, town officials and employees will not (1) investigate or assist in an investigation of immigration or citizenship status; (2) aid in arrests or detentions initiated by agencies enforcing federal immigration law; or (3) request, maintain or disclose details of immigration status. 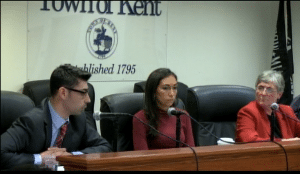 On April 3, the Beacon City Council unanimously passed a similar resolution declaring the city to be “welcoming, safe and inclusive.” Neither resolution uses the word sanctuary. An executive order by President Donald Trump (since temporarily blocked by a federal judge) threatened to cut law enforcement funds to municipalities that declared themselves to be sanctuaries.

Denbaum said that while he recognized the Philipstown resolution was “largely symbolic” because the town does not have a police force, “people who don’t quite understand the dynamics of local politics … might think that this is an area where you will be given sanctuary if you committed a crime as an illegal immigrant.”

That, he argued, put the residents of Kent at risk by putting “criminal illegal aliens” in proximity to the town. His proposed resolution would confirm that Kent follows “the rule of law” and that its police and officials would “cooperate with any investigation, detention or arrest by any agency enforcing federal immigration laws and, if requested, disclose information regarding the citizenship or immigration status of any person to said agency.”

Despite assurances in the Philipstown resolution that it would cooperate with court orders and the law, the document is “a little toothless,” Denbaum said, because “the laws don’t require you to cooperate and the court orders are hard to come by. They’ve made it clear that absent a court order saying something, or a law that I’m not aware of requiring them to do something, they will not comply.”

In contrast, he said, Kent needed to “make a statement to alert people who may fall into this category that you are not welcome here.”

Supervisor Maureen Fleming noted she had been asked by a Kent resident if its board would consider a resolution similar to what Philipstown had done. But she said she didn’t see a need for the town to take either position.

“If places are becoming sanctuary cities to make a statement, I don’t think we have to say we’re not to make a statement, as well,” she said. The only time the town gets involved with federal immigration officers, she said, “is if they are executing a warrant and ask our police department to back them up.”

After some of his colleagues hesitated at criticizing another town board, Denbaum said at the May 2 meeting that he would remove the section referring to Philipstown.

However, after more discussion and public comment, no vote came. “I’m OK not passing any resolution,” Fleming said. “We can continue this discussion if it needs to be continued at the next meeting [on May 16], or we can just move on.”