Your article, People Power (Aug. 4), addressed what will be done with the stored spent fuel once Indian Point is decommissioned starting in 2022. Discussing the long-term storage of its used nuclear fuel typically reveals two mutually exclusive beliefs about radiation. One belief is that any amount of radiation is dangerous. The other is that radiation is natural. Too much is deadly, but the right amount is beneficial and not harmful. 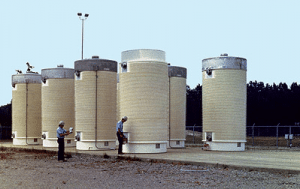 An example of dry-cask storage

Whether you start with one belief or the other, the two sides of the debate, not surprisingly, always arrive at different answers. From the “beneficial” viewpoint, start by asking, “What does science and engineering prove is the worst that can happen?” Reactors, including at Indian Point, can have a core meltdown and release radioactive material. This was known from the beginning. The design and procedures were meant to prevent this tragedy, but experience with all technologies taught us to never say never. It was judged that a meltdown would be rare, so the overall risk, spread over years, was in line with or less than other risks society accepts. It happened at Fukushima because the site was not tsunami resistant. 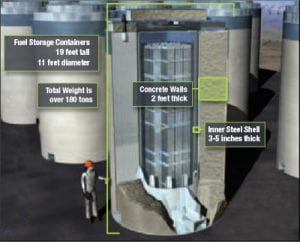 A meltdown or fuel damage is caused by the heat from the radioactive atom-splitting parts. Radioactive means decrease with time and eventually reach zero.   Years after shutdown the fuel heat is very low, and continues to get lower. This fact does not seem to be acknowledged by those of the “any amount is dangerous” camp. When in dry casks, the used fuel, still in solid form and cooled by the chimney effect, would take many days to overheat. There is more than sufficient time for action to restore air flow. If blasted apart by terrorists, the fuel pellets would lay on the ground being air-cooled.

There would be some radiation, but comparing this, years after shutdown, to a meltdown is not based on science.  It is politically useful for some. Used fuel in dry casks is safe in storage and shipment.

Shaffer is a nuclear engineer and a longtime member of the American Nuclear Society.